Comedy relies on timing, as everyone knows. For a comedy film (especially one as soulful as Birdman), the timing comes not just from the actors abilities to land a joke but from the way the film is edited. Skilled editors help create juxtapositions, perfectly timed cuts and unexpected shots that give a particular scene a lot of its comedic punch.

By now you likely know at least a bit about what Birdman's all about — Michael Keaton stars as Riggan Thomson, a washed up actor once famous for playing the eponymous superhero, who is mounting a Broadway play as his comeback. That play is an adaptation of Raymond Carver's "What We Talk About When We Talk About Love," no less, and Thomson's desperate comeback attempt is being threatened by money woes, a mercurial co-star (Edward Norton), a vengeful critic, and most of all, his own weakening grasp on reality.

What does this have to do with world renown Mexican drummer and Birdman composer Antonio Sanchez? Without Sanchez, the incredibly ambitious, sensationally constructed film would have had a hard time landing its many comedic moments. This is because director Alejandro González Iñárritu, working with ludicrously talented cinematographer Emmanuel Lubezki, an incredible crew, and committed, daring actors had meticulously crafted the film to appear is if there’s not a single cut in the entire run time.

“Nothing was improvised,” Iñárritu said in the press notes, “it was a study in timing with the precision of a clock.” Not exactly a recipe for comedic gold, yet the film is funny, ferocious and utterly compelling. This is thanks in part to the work Sanchez did to give a film that appears to be a single take the necessary beats (literally, in this case) to make it work as more than just a perfectly choreographed motion picture. "By editing you can alter rhythm and pace. Not having that tool in a comedy can be extremely challenging," Iñárritu says. "So I thought the drums as the main score would provide the film not only a good vibe but the possibility in helping me find the beat it needed." 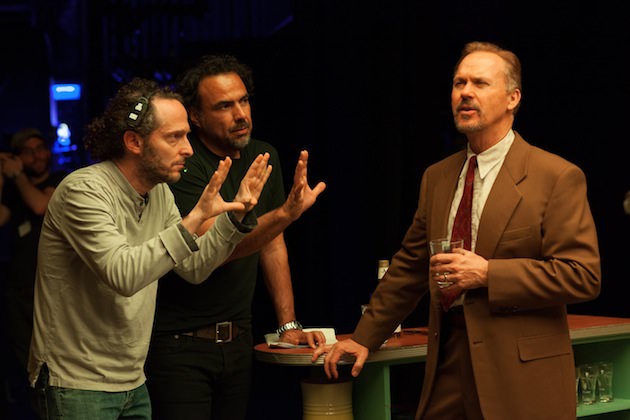 Sanchez’s involvement in the film is a touch serendipitous, which is fitting for such a surreal, beautiful film. “I met Alejandro a few years ago, playing with Pat Meatheny in L.A.,” Sanchez says. “After the show there was an after party. Alejandro was a big fan of Pat, and he was happy there was a Mexican playing drums with him.” [Laughs]

This began a cycle of Iñárritu coming to see Sanchez play. They established a rapport, the two talented Mexicans plying their trades in different mediums, each loving the work of the other. “Then one day last year, out of the blue he called me and told me he was working on his next film, and he thought a drum score would be great for it. Of course I kind of freaked out, in both a good and a bad way. I thought, well, that would be incredible but I have no idea how we’d pull this off. But he seemed so confident. He’s very knowledgable about music, so if he thinks it’s going to be right for the movie I figure it would be right.”

Iñárritu didn’t fill Sanchez in on just how ambitious his project was. “Alejandro mentioned the way the film was going to be shot, but I don’t think he actually talked about how the drums would work with this method. He simply said the nature of the story and the characters could work really well with drums. But obviously he was already envisioning all of that.”

With just 30 days to film on location in New York, and to film in such a way that everything had to be planned down to the head movement and specific marks of every actor, there was practically zero room for error. Sanchez was initially asked to simply record some demos in a studio in Los Angeles of his drumming.

“Alejandro would just basically say, ‘Okay, in this scene Riggan is kind of going crazy in his dressing room, then he gets up and opens door and walks through a long hallway and his mind is all over the place,” Sanchez says. “He starts getting closer to the stage door, now he opens the stage door and goes on stage and the whole audience is there, now…go! What would you play?”

Sanchez would begin improvising, imagining Riggan moving through the St. James theater as he played. “I had Alejandro sit there with me, and I told him to raise his hand every time Riggan does something, so I started improvising…as a jazz musician that’s what I do, but I’d never had to do it to someone else's imagination before [Laughs]. I just had him there, I imagined the scene with him, then tried to play something I thought that would fit with what he was envisioning.”

Once this initial session was complete, Iñárritu took the demos, spliced them up, and put them in different parts of movie as a temp score. “To get an idea if it would work, they brought me over to Los Angeles so I could see the film with the drumming that they put in place, but I could hardly recognize it because it was so spliced up,” Sanchez says. “So then the idea was to go back into the studio in L.A. and redo it, but now against the actual images in the film.”

One of the problems that Sanchez found with his original demos was that they sounded too good. “They were really pristine, the drums just sounded too good and clean,” he says. “Because of the nature of the movie and the characters, Alejandro wanted something a little dirtier, a little greasier, so when we did final stuff in L.A., I prepared the drums in a way to sound old and rusty and more organic.”

Now with the drums properly dirty, and the actual film to watch while he played, Sanchez and Iñárritu sat down together again. "Now he would give me instructions beforehand and say, 'In this scene, listen to what Riggan is saying, then when he says these three words, I want you to stop what you’re doing. Then when he starts talking again, go into something different.' He’d give me these pointers, and I’d be improvising and playing while watching the film. It was so much fun to get inside Alejandro’s head and see his thought process when it comes to music. The fact that he’s so knowledgable about music and so hands on about it really helped."

Sanchez changed his entire approach to drumming in order to create the sound Iñárritu was going for. “I made myself sound a little loose, and not precise, and all over the place, if you will. Another thing we did that you normally never do, is we recorded a few tracks of drums on top of each other, and that makes it sound like it’s something almost superhuman going on, so when we layered some of those tracks on top of each other it really made it sound so convoluted and crazy, and that fit perfectly with Riggan as he went crazier."

And yet there was still one more bit of complication Sanchez had to work out. You may notice while watching the film a few glimpses of a young drummer playing while the action swirls around or past him. "That's actually a friend of mine, Nate Smith," Sanchez says. "I recommended him for it, I wasn’t around when they shot those scenes, and he was just playing…his drumming was not going to be heard on the movie, only seen, but then when we did sessions in L.A., I had to match what he was doing in the image with what I had to do drumming-wise. There’s so many films that are about music where the image and sound completely do not match, and sometimes I’m amazed that either the director doesn’t care or didn’t notice," he says. "As a musician it’s so obvious to me when someone’s playing or not playing, but Alejandro was careful, so I had to learn what Nate was playing in those scenes so I could match it when the camera would pan to him, I’d be playing something then the camera panned to Nate and I’d have to remember what he was doing so it would it match. That took a little while."

Eventually, Sanchez got it, as he did for the entire film. Without his drumming, Birdman might not have taken off the way it did. When you see it, and hear it, perhaps you'll appreciate just how crucial the beat really is.