Did You Move it Or did I? Get Creepy With Oujia

The genius of the Ouija board is that it really is hard to tell who moved the piece. Did you? Did I? I think I might have, but why can't I remember? The bizarre fact that this patently ridiculous game, in which two players pretend not to move a planchet around on a board that spells out messages from the spirit world, really did creep you out as a child, and it speaks to its 125-year longevity and our collective wish to maybe, kinda, sorta mess around with the occult. But not really. I mean you moved it, right? Right?

There are three basic rules one must follow when using a Ouija board: Never use it a graveyard, never use it a lone, and always say goodbye. In the upcoming Quija, one of these rules is broken right from the jump, along with the boundary between life and death and the creepy spirits that hope to transcend the two. If they could make a film out of your childhood Legos, Transformers and Teenage Mutant Ninja Turtles, the Ouija board seems just as apt for adaptation onto the big screen.

The Ouijia board rose from obscurity in the late 19th century into a popular game sold by a major company to people who liked to freak themselves out a little bit. The brief history of this “talking board” begins in 1890, when entrepreneur Charles Kennard and attorney Elijah Bond created the Ouija after a rise in such devices in the mid 1800s, said to help people contact loved ones they had recently lost. The apocryphal story of the board’s creation has Kennard and Bond’s asking it what it would like to be called, and it spelled out “O-U-I-J-A.” The board then explained what the word meant by spelling out “G-O-O-D L-U-C-K.”

By the 1920s the Ouija board had grown in popularity. In fact, Norman Rockwell had watched with fascination as several couples at a dance hall had eschewed dancing in favor of sitting “face to face, knee-to-knee and moving small heart-shaped objects (planchettes) on Ouija boards,” as the Saturday Evening Post’s Robert Berridge wrote. This moment led this Post cover, painted by Rockwell himself. The game we know today was popularized by Parker Brothers, which bought the game in the mid-1960s (one imagines all sorts of unique experiences with the board during that decade), and eventually became a Hasbro game in the 1990s when that company bought Parker Brothers.

Now you might be aware that Hasbro has become a bit of a player in the film world, with a little series of movies about alien robots based on one of their toy lines. A few years back, Hasbro, along with their go-to director/producer Michael Bay, who with Andrew Form and Brad Fuller run Platinum Dunes, approached Universal about making Ouija as a microbudget film that explored the board’s freakier, supernatural elements. A few more players got involved, and voila, Ouija was greenlit. Enter the husband-and-wife team of Stiles White and Juliet Snowden, no strangers to the horror genre, having written Knowing and The Possession together. “All they said was, ‘Ouija, what would you do?’” Snowden said in the production notes. “Our first instinct was to consider our memories of the Ouija board: playing as teenagers, sitting around with our friends and wanting an answer to something…anything.”

One of the board’s draws as a narrative device is that it can serve one purpose, connection, in two, very different ways. If you’re using the board as a means of closure between you and a loved on, then it’s a wish fulfillment device. Yet in doing so, the board may also open the supernatural door to elements you might not want in your life, which is the danger anytime you start messing around with necromancy. “Whatever the setting is, we try to create a compelling situation centered around people up against something larger than life,” White said. “And that’s exactly what we’ve done with Ouija.”

So what does the protagonist of Quija want from the board? She wants to find out what happened to her best friend who died under mysterious circumstances. Thanks to the legacy of the Ouija board, and the countless stories it has inspired, White and Snowden culled pieces of their story together from the wild tales the game has inspired. The most closely held Ouija belief is that if you don’t follow the rules of the game, you may open a door to the spirit realm you might not be able to close. Debbie (Shelley Hennig) breaks a cardinal rule right from the film's outset; she plays alone. 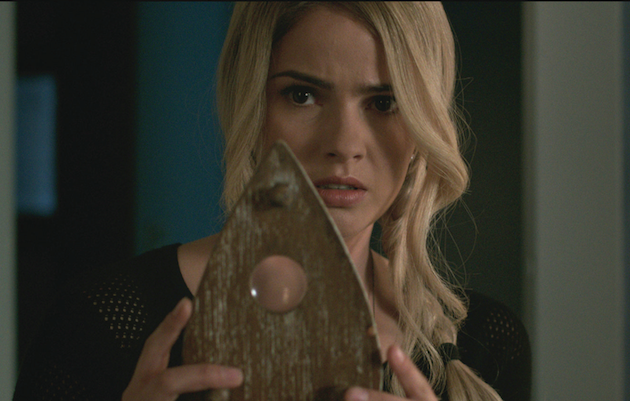 The protagonist Laine (Olivia Cooke) pays a visit to her friend Debbie right before Debbie makes the fateful decision to play by herself. Debbie swiftly dies in a horribly gruesome way, leaving behind clues in the form of diary entries and video footage, showing a bit of what happened right before she died. When Laine starts looking into these clues, they all point to an old Ouija board. 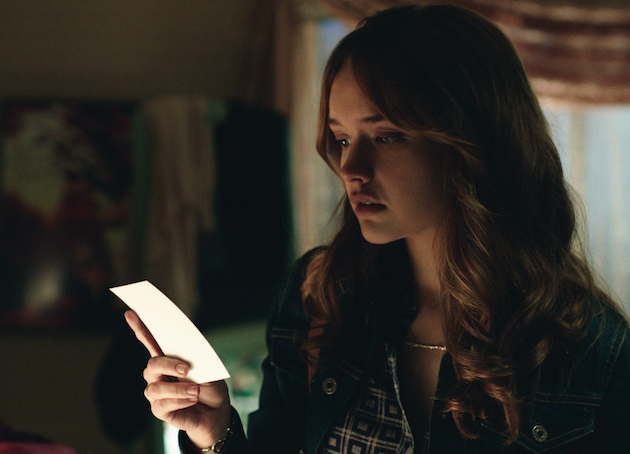 Working from a small budget and limited locations actually aided in the telling of this creepy story. “The schedule kept the drama up; we would be down in the basement for hours, and the tone of the film would seep in the longer we were down there,” White said. “The intensity that got inside the actors’ heads, and they were able to live in the moment and truly be scared, which made for great performances.” The basement was part of Debbie’s house, a major location for the film that serves as the host for the malevolent spirit that uses every nook and cranny of the place to its advantage. In reality, the house the location scouts found, and production designer Barry Robison went to work on, could itself be haunted—it’s a 120-year old Tudor-revival house in Los Angeles, built in 1895, only five years after the first incarnation of the Ouija board appeared. The house had a lot of small, claustrophobic rooms, a basement (rare in California), and plenty of little details that fit the script.

You might think a microbudget means not being able to afford a topnotch crew, but that’s now how it works. You’ve got cinematographer David Emmerichs, a man who knows a thing or two about filming in tight, terrifying spaces. He was the steadicam operator on Se7en, and recently worked as the virtual camera operator on Dawn of the Planet of the Apes. You’ve got costume designer Mary Jane Fort, the woman behind the iconic duds worn in Mean Girls; and there’s Academy Award nominee Mike Smithson, whose work makeup work on Avatar, Men in Black 3 and Thor: The Dark World more than prepared him to create a dark spirit worthy of a Quija nightmare.

Ouija is hardly the first film to use the “talking board” as a narrative device. The Witchboard trilogy, which began in 1985 (starring Tawny Kitaen, no less), had a group of friends channel the spirit of a little boy through a Ouija board. Michelle Pfeiffer uses a K-Mart Ouija board to find out what’s spooking her in the house in What Lies Beneath (2000). In the 1990 drama Awakenings, Robin Williams uses a Ouija board while experimenting with his catatonic patient Leonard, played by Robert De Niro. And let us not forget arguably the greatest horror film of all time, The Exorcist, which used a Ouija board as the thredshold through which Captain Howdy takes possession of Regan.

There's quite a legacy of Ouija-related madness, perhaps dating back to your very own childhood and throughout some pretty memorable films, and this Friday, you'll get a chance to see what kind of horrors the board conjures next.

Feature image: (L to R) Pete (DOUGLAS SMITH), Laine (OLIVIA COOKE) and Sarah (ANA COTO) play the game in "Ouija", a supernatural thriller about a group of friends who must confront their most terrifying fears when they awaken the dark powers of an ancient spirit board. Courtesy Universal Pictures.