It’s a rare thing for a composer to begin work on a film before the film has wrapped. Rarer still for that composer to find himself on set, watching the action he will underlay with music unfold before his eyes. Yet very little about the making of David Ayer’s World War II film Fury was typical, and for Oscar-winning composer Steven Price (Gravity), this meant getting a chance to be a part of the filmmaking process as it was happening.

“About a year ago I got the script sent over, and I’m not the best script reader in the world,” Price says. “It tends to take me ages, but something about the way David Ayer writes characters helped me get to know the crew on the tank really fast, and I got really interested. I read all of it in one sitting.”

Price got the script during production, and found out that they were filming about 40 minutes from his front door. “I went to Oxford and got to see them shooting one of these battle sequences. It couldn’t’ have been better, they drove me over in Land Rover, and it’s just this freezing day, and they’re doing long shots and there’s not a camera in sight. I’ve never seen that sort of World War II filming before.” The authenticity Ayer went for meant the enlisting of World War II veterans, tactical and military advisors and real tanks, including a German Tiger tank, the first time a real one had ever been used in a film. Things got so real, in fact, that an extra was stabbed by a bayonet (it pierced his shoulder, he survived). It also extended to what he wanted from his composer.

How does a composer even attempt to match or honor the authenticity of a film that the New York Times Michael Cipely has described as a World War II film that popular culture has rarely seen? By capturing and carrying the mood of the film, which follows a single tank crew, led by Don “Wardaddy" Collier (Brad Pitt) over the course of a single day into a horrifically tense battle behind German lines, in which they are outgunned by the superior German tanks (including the Tiger) and overmatched to the tune of 300 German soldiers against five Americans.

“At our very first meeting, David thumped his chest and said, ‘I want to feel.’ Conversations with David were always about mood and the psychological parts of the film, rather than about music. My job was to get into their heads – they’re exhausted, they’re basically in hell, and they’re spending day after day moving on into the next town, never knowing when the next horrible thing might happen. That sense of exhaustion, of constantly moving forward, led to my score having a very heavy tread to it. Tanks have this steady, grinding motion, just the sheer weight of the thing, but also the heaviness on the soldiers' minds all the time. David and I talked about PTSD, about how deeply damaged the men were at this point in the war, and I tried to bring that weight to the score.” One of the components that Price wanted to reflect in his score was the fact that World War II was the first truly mechanized war. “David and I talked about the nature of this war, the first mass mechanized war, and how there were these death machines, but within those machines were humans. So the score has this mechanical motion, a forward motion, but within that are broken, exhausted men.” 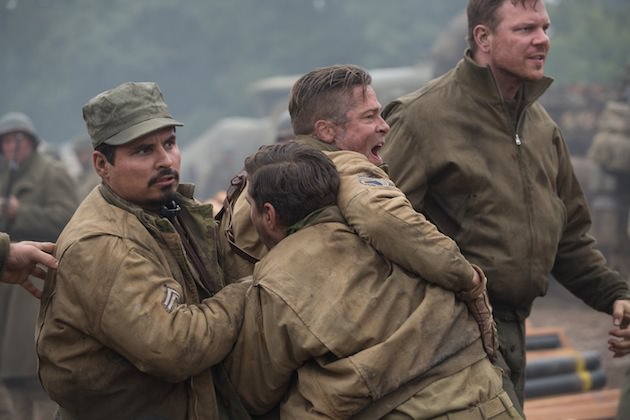 In order to achieve this, Price used actual recordings from set of the various, groaning noises the tanks made and the ambient sounds of battle. “They had authentic tanks, and they recorded a lot of that for me – slamming hatches, machine gun fire, shells dropping on the floor of the tank — these real metallic noises.” Price also used radio wave signals (as he did for Gravity) and the jingling of dog tags. Once Price is done with these songs, they're rarely recognizable from their original source, but their effect is haunting and in keeping with Fury's realism.

When composing for the orchestra, Price used his musicians in novel ways, creating the big orchestral moments you’d expect but also using small contingents, and having them make as much ‘broken sound’ as possible. “The most common note I got was, ‘Make it sound more broken, more exhausted.’ The bows were slipping off the strings, they were trying to play so quietly.”

To capture the human beings inside these death machines, as well as a situation that presents itself to the tank crew at the heart of the film, Price relied on choir singers. “I used a lot of human voices, and I did the same with the voices as I did with my instruments–instead of full voices, there’s some croaking voices, and I put some solo voices buried into the score.” When Wardaddy’s crew find themselves behind German lines and surrounded, Price relied on a chanting choir to put the audience inside the tank with the characters. “While they’re technically winning the war, they’re surrounded, so I recorded a lot of constant chanting choirs, both small and big, and they’re always kind of moving around you, hopefully making you feel like you’re being surrounded.”

Listen to the subtle chanting in the below clip become more pronounced as the scene intensifies:

Although the Nazi regime’s back was essentially broken by April, 1945, it still fought on, with thousands of people dying in the war’s senseless, brutal finish. Ayer’s film puts his tank crew in the very heart of these battles. They often don’t know where the danger is going to come from. “There’s this sense of dread in the film, so we put a lot of whispering voices in there, but you can’t pick up what they’re saying, only that they’re chanting in German.” What exactly are they chanting?“Extracts from the Lutheran bible, which of course felt apposite to the pain of war.” Yet when you hear it in the film, it’s undeniably unsettling. “Sometimes they’re very quiet, other times they’re really yelling.” Price credits the chanting choir as the big "ah ha" moment he had when trying to capture the tank crew's inexorable movement towards their grim objective. "When I fell upon this chanting choir, this was our way of maintaining a constant pulse, but one that's ever evolving. I was always trying to find this way of making the score exhaustedly grinding forward, filled with threat, but also able to evolve into something quite moving. You're just working away and you try something different, there’s a little hint of something there, and then, all of a sudden, there’s a couple of hours where it makes the previous two weeks where you were struggling along suddenly make sense. The choir became almost an army. I recorded them in a big group, and then sometimes I’d get every single one of them on their own mic and ask them to whisper, and I'd take these individual voices and move them around, so sometimes it’s like someone’s sitting on your shoulder one moment, and then the next they're gone."

Price got to bring on a few musician's he's worked with in the past that helped him achieve the emotional register he was looking for. "Lisa Hannigan, an Irish singer who worked with me on Gravity, I got her back in but in a much different way for Fury. She was singing with John Smith, and I wanted these solemn lines that creep in sometimes. Then I had the cellist I work with a lot, Will Scofield, who somehow always plays exactly the sound I imagine in my head." Price's orchestra was none other than the London Philharmonic. "They were great, there’s a huge amount of orchestrals."

Price has worked on his share of epic films, including Gravity, Batman Begins and the last two films in the Lord of the Rings trilogy. Fury was a filmed with arguably the biggest star in Hollywood, a healthy budget, and actual tanks, yet Price says it felt like working on an indie film. “It was so great to work with a director who wanted you to explore and find a unique voice for the film. It always felt like an indie film in terms of the way you were thinking about it, and the risks David was willing to take. The scale of the film and the story were huge, but we were playing with extreme ideas at the time. David wanted you to feel, and we weren’t going to stop until that emotion was in the film.”

Listen to the score here.