Alejandro G. Iñárritu’s Birdman, out October 17th, marks his first formal foray into the comedy world, but this film only strengthens his reputation for touching, intricately woven narratives. A little too intricate, perhaps, as Iñárritu’s focus on contradiction, validation, and all things meta blend into a swirling mass of crises for both viewers and characters alike. But worry not – Iñárritu has a plan, and Birdman proves to be a film that brings an audience closer to the story than they might expect.

The plot of Birdman centers around Riggan Thomson, a.k.a. Birdman (played by Michael Keaton), a former cinema superhero with a dream: heading an ambitious Broadway play in order to validate himself as much more than a washed-up Hollywood icon. After a freak accident that leaves his leading man down for the count and his last chance at success nearly in shambles, he must balance his quest for relevance with the inevitability of its demise.

“I was interested in exploring the battles with the ego,” says Iñárritu in the press notes, “the idea that no matter how successful you are, whether in money or recognition, it’s always an illusion. It’s temporary. When you are chasing the things you think you want and empower the people to validate you, when you finally get them, you soon find an impermanence in that joy.”

This illusion carries its way through the entirety of Birdman, where even the film’s anchor and primary setting – Broadway’s esteemed St. James Theater – plays an essential role as both character and contradiction. The theater, rough around the edges but majestic in its legacy, became a perfect representation for Riggan’s mental state – a once limelight soaked place that is past its prime but still big on ideals. And that’s just the thing – the entire film serves as a juggling act between the real and imagined to the point where they become intertwined. 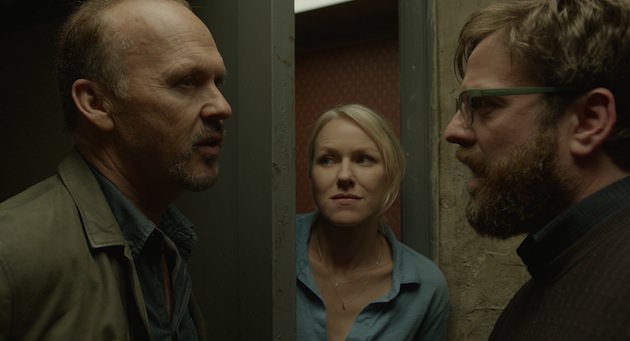 On the surface, there’s a pleasant irony as a viewer in how Michael Keaton plays a dejected yet hopeful former silver screen superhero. The obvious connection between Riggan Thomson's former reign as Birdman and Keaton's own portrayal of Batman in Tim Burton’s revival of the franchise is rich. Thomson the character seeks a return to legitimacy as Keaton the actor achieves just that before your eyes in Iñárritu’s film. “I think the heart of the character is his contradictions," Keaton said in the press notes. "He feels like a comet one moment and two seconds later, completely deflated.” This violent game of tug-and-war, whether between high and low or fact and fiction, sets the stage for just how many layers this film can pile on top of itself. And things only take a turn for the meta as an increasing number of parallels are able to be drawn from just a quick glance.

As mentioned beforehand, both Broadway and Riggan have some steep competition – with the continual rise of Hollywood as the paramount of modern entertainment, neither stands center stage and must rely on legacy to maintain validity rather than admiration or attention alone. To conquer his battle for relevancy, Riggan chooses Raymond Carver’s infamous What We Talk About When We Talk About Love to revive his career. This iconic play’s theme of man’s search for love and acceptance was the inspiration for Iñárritu’s decision to choose this play for Birdman because it was “actually a very bad idea.” Riggan plummets further down the rabbit hole by projecting his struggles onto his character in the play – he’s becoming the legacy he seeks to attain in a manner completely off base from his intentions, all the while being played by Michael Keaton, an actor who was on top of his profession and who is now reminding audiences of what they loved about him some twenty years ago in a performance that is earning rave reviews.

The cinematography, by that master, Emmanuel Lubezki, also seems to tease out all of Riggan’s seething ambition and insecurities by feeling as if it’s an unending, unflinching single take, never allowing Riggan, let alone the actor playing him, a cut-away to gather himself. This single, uncut shot, à la Alfred Hitchcock’s Rope, is actually an illusion, but a brilliant one. Because these takes last a lifetime (or so you’d think) and they’re free from any discernable cuts or edits that could allow for error, much less a pause, it’s very much like live theater – for Keaton as well as Riggan, this challenge fights against the norm of the multiple takes that most Hollywood actors are allotted while also serving as the precise opposite of this idealized production Riggan is attempting to recreate – all errors are bared for the actor and character. The film itself combines pressures of the theater and modern film, allowing for a new interactivity between the actors and the sets they inhabit.

Although the film’s not actually one long single shot, it was still designed as if it was. Rehearsals required blueprints for the sets, and production designer Kevin Thompson remarks how “…the notes that came out of those rehearsals defined the actual size and shape of the set,” meaning the St. James Theater actually morphed throughout production beyond accommodation for camera moves but also to reflect the inner workings of Riggan’s mind (Birdman was filmed sequentially according to the film’s plot).

And with this style of filmmaking, where all must face countless points of no return, the characters, actors, and even Iñárritu cannot quite obtain the usual Hollywood polish. Like theater, there’s no perfection, no ideal – so they strive to recreate this through theater. And it’s real. In life, “[w]e don’t cut to another reality,” Iñárritu explains. With innovative narratives like Birdman’s, we’re trapped in this film’s continuity as we the viewers attempt to reach our own best visions of ourselves, but, like life and theater alike, we can never truly uphold this vision. The validation that serves as the driving force for Riggan in the film becomes little more than grasping at air, with Riggan learning that this illusion may be the only “real” part of his grand endeavor.

As a result of this web of blind desires, Birdman has no problem with ensnaring itself (and you, too) in its metaphysical trap. The film, effortlessly self-aware and stacked with layers upon contrasting layers, creates a contradictory world in which a film attempts to capture (through theater, no less) this fleeting moment of a personal vision realized. However, with a narrative that stops for no one, even the film cannot combat time’s flow, and life somehow continues onward no matter how we choose to delude ourselves, mask on or off.