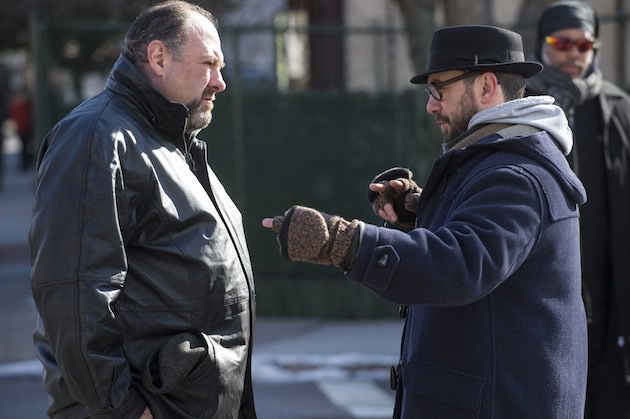 How did a Belgian director, most well known for his fantastic, Oscar-nominated foreign language film Bullhead, about a young cattle farmer’s deal with a notorious beef trader, end up filming one of the best New York crime thrillers in recent years with a predominately international cast and crew? Michaël R. Roskam's The Drop is based on crime novelist Dennis Lehane's short story "Animal Rescue," adapted by Lehane himself for his first feature film script. The Drop's premise is simple, yet because it's a noir that simplicity belies complexities (really, duplicities) that line the interior of the narrative. The story centers on reticent, doleful Bob (the British Tom Hardy), a bartender at Cousin Marv's in Brooklyn (the specific neighborhood is never mentioned, the actual locations were mainly Marine Park, Fort Greene and Windsor Terrace) who finds an abandoned, injured pit bull puppy in the trash. Bob's decision to pull the pup out of the trash introduces him to Nadia (the Swedish actress Noomi Rapace) and, eventually, her completely unstable, menacing ex-boyfriend Eric Deeds (the Belgian actor Matthias Schoenaerts). 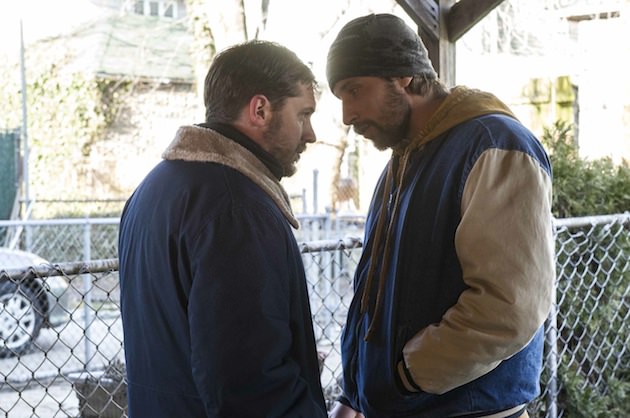 Meanwhile, Bob's job at Cousin Marv's means he works for his actual cousin Marv (the late, great, and very American James Gandolfini), and when the bar is held up, it sets into motion a series of twisting, increasingly dangerous events that threaten the lives of our protagonists, and, it should be noted, the impossibly adorable puppy, Rocco. Throughout the plot twists and fantastic performances, the still un-gentrified neighborhoods in Brooklyn that Roskam and his crew filmed in remain a beautifully well-worn, believable milieu for the action to unfold.

We spoke to The Drop’s Michaël R. Roskam about researching Brooklyn (from bar to bar to bar), working with writer Dennis Lehane and what the true heart of film noir really is.

So, what brought you to Brooklyn?

It was just the script. It’s always where it starts, and it was so well written. Plus the story itself had the elements that I always like to have in my work. I’m a writer myself, and I was looking forward to see if I could direct someone else’s material, and for this one I felt like, I wish I’d written it myself.

What about it struck you most?

Thematically, it’s this search for innocence, which Dennis wrote in a very complex way. I loved it. Looking for innocence is something we all do, it’s this thing that’s really deep down that drives us to deal with life, and we try keep as much of that innocence that was given to us the moment we were born as we can. Although according to Christianity we are born with sin, we will never be more innocent then the moment we are born. I’m really intrigued by that concept. So the story is driven by this basic concept, but then there are these complex, noir layers.

Tell me about the noir elements in the film. It’s a very unique Brooklyn noir, with these blue collar guys living in a neighborhood now run by international mobsters…

Well, the origin of noir is really about the way people in the lower classes react to government, react to the law and react to crime. Noir is always about the lower social classes and the noir genre has always been critical of the way they’re treated. Noir’s had this purpose to portray the lives of the people of the streets, which was a life of crime. Many people think if you make a film noir it is, by its’ nature, about crime. No. Noir is, by its’ nature, about people in the cities who have to deal with the consequences of the actions of the law. The law was there to protect a certain kind of people, but it never protects the poor from crime. So noir is the other side of the coin, it’s the opposite of the law. That’s also something that I’m intrigued by is how the absence of law easily becomes crime. 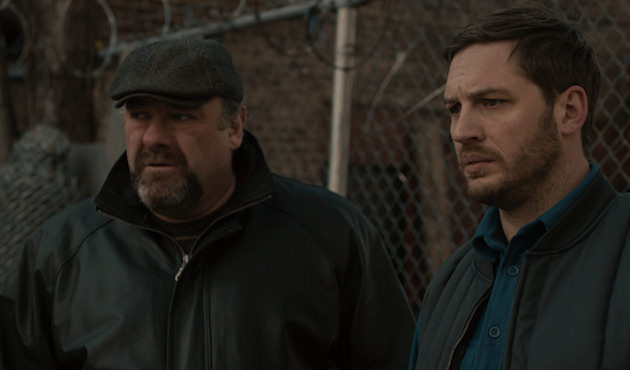 You really do get the sense that there is very little Bob or Cousin Marv could do in their situation—the cops will not save them from the Chechens.

Yes, for people in this position, you have to deal with the forces that are surrounding you, and the forces in these guys lives are coming from the criminal side of things.

What was it like working with Dennis Lehane on his first feature script?

Well it was based on his short story, which was really a failed novel he was never able to write because it never really came out. Producer Mike Larocca discovered the story and asked Dennis if he could make a film out of it. I know Dennis had been writing for The Wire and Boardwalk Empire, so I think he was ready for the next step and write his own feature script, and he did and it was so well written. He was also really cool to work with, he told em to do what I needed to with the script, and to call him if I needed anything. He was very collaborative.

Tell me about filming in Brooklyn, especially in these parts of Brooklyn that have still yet to be gentrified.

Well the location was a bar, so our location scouting became almost an anthropological expedition. I visited so many bars. We had a great crew and location scouts, and our location manager Keith Adams was amazing. He took me everywhere, and we went to look for bars all day long. The bars gave me a very good, quick impression on the people who live in, and around, the bars. It’s my job to be quick at it and to be a sponge and take iin as much as yI can, to filter it and crystalize it into a world I wanted to show.

You used a few Brooklyn neighborhoods to create the world of The Drop.

It’s bigger than Paris! It’s huge! Brooklyn is also so cities. Brooklyn has a lot of faces, and some are very particular. We recognize them immediately, like a beauty mark on the face. I didn’t  want to go too much into the clichéd Brooklyn, so I tried to the authenticity of Brooklyn to be right. Everything was shot on location, everything, we only reconstructed some interiors, but the bar is a mix of three bars. 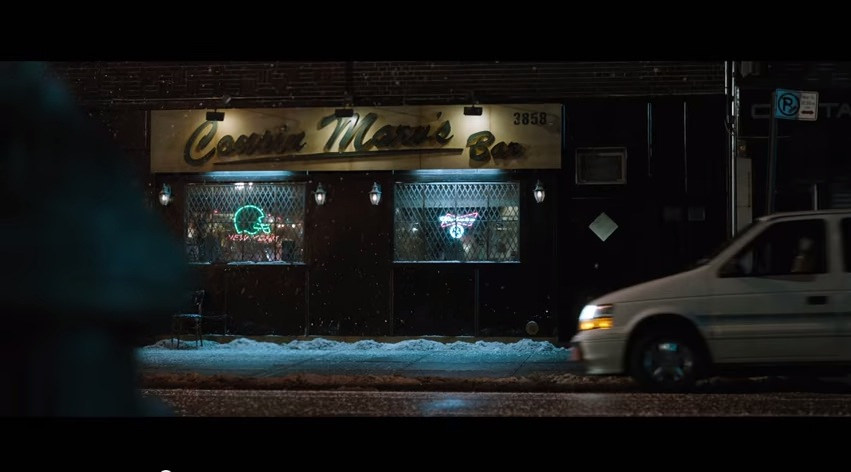 Cousin Marv’s bar feels like a very real, very beloved dive bar where you don’t ask too many questions about what might else be going on.

We found this empty bar, then we built the bar based on a cross breed of three bars that we really loved but we couldn’t get because we couldn’t put these bars out of business out of six weeks. Think about that—we offered to pay them, and for their bar to be in a movie, but they couldn’t do it because they rely on their people, and they thought that if they’re closed for six weeks they’d lose their people. They were that loyal. So rather than have someone shoot a film in their bar and get paid for it, they’d rather keep their bar open so they wouldn’t lose their people and stay loyal to their people. All the bars we tried to pick, not one would close down for six weeks. Not one of them, so that’s why we had to rebuild the bar. Our production designer, Thérése DePrez, she knew exactly how this world looks and did an amazing job. 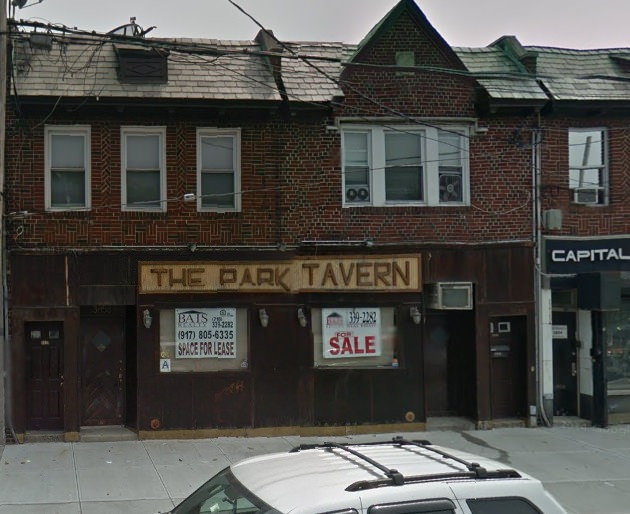 Where did you find your Brooklyn inspiration? Was it another film? Books?

What we found was, these blue-collar neighborhoods, everything is very worn but it’s also very neat. The houses, the cars the shoes, they keep things clean and neat. The places we filmed were not where everything is dirty and broken, they’re worn, but they’re neat. That’s what I tried to show, but also I wanted to be faithful to a tradition of showing Brooklyn the way the artist George Bellows used to paint it, that colorful Brooklyn street life. He had a show at the Met just as we were starting pre-production, and my DP Nicolas Karakatsanis told me we should look at that, and the colors he used in his paintings we still find those colors in Brooklyn today; cobalt blues, ochre yellows, burgundy reds, people are still using those colors, street after street we found those colors, and those colors already existed in early 19th century, so that’s what we did too.