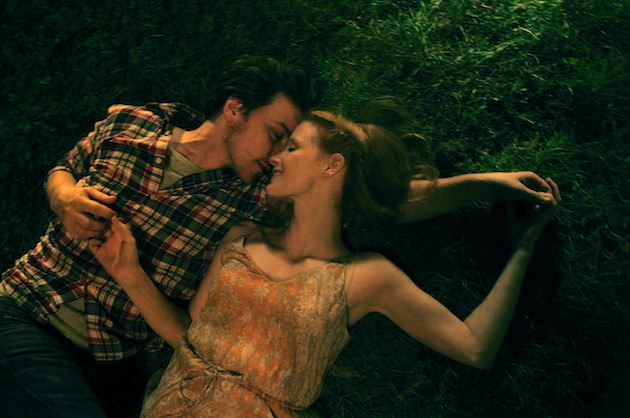 The Ambitious, Beguiling The Disappearance of Eleanor Rigby

Have you ever wondered what it would be like to see your life through someone else’s eyes? In his ambitious feature debut, writer/director Ned Benson gives his characters this unique chance in the emotionally charged tale of love, loss and rediscovery that is The Disappearance of Eleanor Rigby. The film follows the relationship of estranged couple Conor (James McAvoy) and Eleanor (Jessica Chastain) from first blush to final breath as they try to regain the connection they once had. A series of flashbacks throughout the film’s present-day setting unravels how the husband and wife went from star-crossed lovers to complete strangers after a horrific act of fate.

On its surface it may sound like any other devastating romance, but Benson’s ambitious and unorthodox direction chronicles the highs and lows of Conor and Eleanor’s relationship from both characters’ perspectives. The film’s final version, originally entitled Them, is a combination of his previous two films – Him and Her. In a Q&A with The New York Times, Benson explains that after showing Him and Her at the Toronto film festival in 2013, people were questioning the separation of the two perspectives. With the ever-imposing question “why not” in mind, he sat down with editor Krissy Boden and quickly put a cut together for the 2014 Cannes Film Festival? “I was really interested in the idea of subjectivity in terms of how two people can experience the same thing in different ways,” Benson explained in the production notes. With this approach and Chastain’s fire-red hair burning in his mind, The Disappearance of Eleanor Rigby was born.

Unbeknownst to Benson, the film’s premise began 11 years ago when he met then aspiring actress Chastain at a film festival.

“She was my first fan and has believed in me for a long time, which I am extremely grateful for, because without that I’m not sure I’d have made this project,” he said of his brief encounter with Chastain. “We became very close and I developed what became the two-film project with and for her…and here we are.” 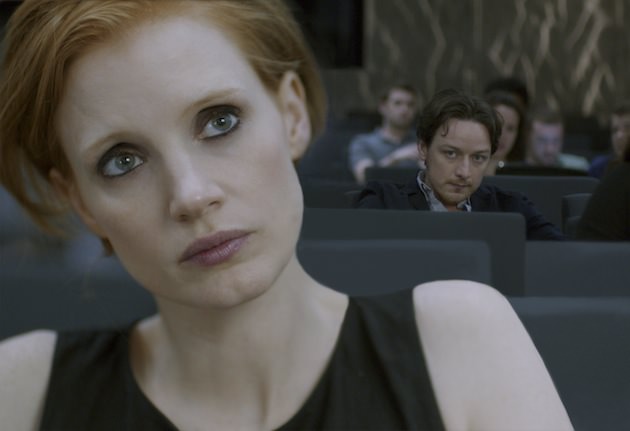 As Chastain and Benson’s working relationship began to flourish – the final piece of this cinematic puzzle, a lyric from the Beatle’s Eleanor Rigby, presented itself. Benson had written, “All the lonely people, where do they all come from?” in a notebook, and attributes this scribble to providing the “proper emotional space” for him to develop the evident theme of perspective and loneliness throughout the film.

With Chastain’s talent and the Beatle’s catchy tune, Benson and producing partner Cassandra Kulukundis set out to assemble their perfect ensemble.

Much like patience is a virtue in any successful relationship, it would become of key importance throughout the production of this film as Benson had to wait almost two years to sign McAvoy. And, according to him, it was well worth the wait because the standout cast joining the two leads, including Nina Arianda, Viola Davis, Bill Hader and William Hurt were all his first choices. The time spent waiting also allowed Benson ample time to develop the mood for every character and scene. 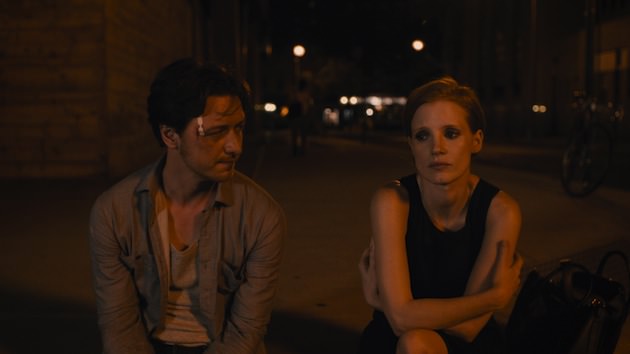 SPOILER ALERT: If you’d rather experience this movie in all its cinematic glory with a box of tissues and bucket of popcorn, read no further.

The final version chronicles Conor and Eleanor’s attempt to pick up the pieces after their young son dies. Although we aren’t shown the tragedy in the film, it is implied through conversations had between friends and family. And as the death becomes an ever-present weight amongst the couple, they let their life-altering circumstance become a cancer, destroying their lives one failed relationship at a time.

Eleanor continues to struggle in her new role as a parent without a child by denying her father (William Hurt), a psychiatrist and teacher, an opening to console her. And her guilt-stricken mother (Isabelle Huppert) can do little more to reach her as well. In addition to her family, Eleanor looks to unlikely mentor Lillian Friedman (Viola Davis) for a way to make sense of her tragedy. As the only character that is unaware of Eleanor’s situation, Lillian provides a glimmer of hope for the future. Unlike Eleanor, Conor is unable to come to any kind of understanding as his victim mentality pushes away good friend Stuart (Bill Hader), who has gone into business with him as the chef at his bar, while distancing himself from his father Spencer Ludlow (Ciarán Hinds).

Shot in and around New York, primarily the East Village, the film’s scenery highlights Conor and Eleanor’s contrasting personalities. “Every creative choice in terms of design reflects the characters, their emotional spaces and the story,” Benson said. This meant customized color palettes were created to give the audience a visual understanding of Conor and Eleanor’s different perspectives. Taking this tailored idea to the extreme, Benson and composer Son Lux (aka Ryan Lott) used props from the film to create the music that, for some, become the third protagonist. Wine glasses from a romantic dinner early on in the couple’s love story come to life as an instrument later on. Details like this only enhance Benson’s major themes of love, empathy and understanding.

Eleanor Rigby’s namesake becomes a self-fulfilling prophecy as she lets grief strip her of her identity and in turn her relationships, most devastatingly her marriage, to show us precisely where all the lonely people come from.