There was almost no reason to expect that there could have been a sequel to Dolphin Tale, considering it was based on a true story and a sequel would invariably have to be fiction. Not that Hollywood is averse to sequels (or prequels, or trilogies, or origin stories, or re-imaginings), but the original Dolphin Tale was a special case.

Dolphin Tale was released in September, 2011, and told the story of Winter, an Atlantic bottlenose dolphin that was already a local celebrity at the Clearwater Marine Aquarium (CMA), a non-profit marine animal rescue facility on the Gulf Coast of Florida. Once Dolphin Tale was released, however, Winter's story resonated with hundreds of thousands of people, and the result had a direct impact on the CMA.

Winter’s story resonated on a lot of levels. First, and most obvious, is humanity’s abiding adoration of dolphins. We love 'em, can't get enough of 'em. The second is people love comeback stories, and Winter’s is a doozy. Third, Dolphin Tale also offered something of an inventor’s tale—people coming together and through ingenuity, skill and compassion creating something to make the world a little bit better.

At three months old, Winter was found stranded in Mosquito Lagoon, near Cape Canaveral, Florida, frail, dehydrated and dying. She’d been caught in a crab trap line that cut off circulation to her tail flukes. Once she was freed, she was transported to CMA for treatment—her chances for survival were grim. Winter was saved, of course (otherwise there'd be no Dolphin Tale) but there was nothing the CMA could do to save her tail—she lost her entire tail fluke and joint, which "fell off like shreds of paper" according to NBC News.

The tail fluke is the engine dolphins use to power themselves through the ocean, and are attached to the joint, called the peduncle, the muscular part of the dolphin. To swim, a dolphin moves its peduncle up and down, allowing the tail flukes to propel it forward. Without the fluke and peduncle, the dolphin can, at best, utilize its entire body to propel itself through the water by moving side-to-side, like a shark. The problem was this swimming style would gradually degrade Winter's spine. Unless she could swim naturally, her life was still in danger.

The story of Dolphin Tale is in part about Winter’s resilience—as the CMA notes on their website, most dolphins caught in monofilament and crab trap lines don’t make it. Despite losing her tail, Winter’s recovery was astonishing. Thanks to Hanger Prosthetics and Orthotics, along with Dr. Mike Walsh, CMA’s marine mammal veterinarian and marine mammal trainers, a prosthetic tail was created and attached to Winter—the first time this had ever been done. Figuring out how to create a prothesis that can not only create enough force to propel a 400-pound dolphin out of the water and 10 feet into the air, as their natural fluke and peduncles do, but that stays on, was a feat of engineering.

What's more, the technology created to make Winter's tail might be useful for human amputees. Dolphins have extremely sensitive skin, so a gel sleeve was created to slide over Winter's stump. NBC News reported that prosthetic specialist Kevin Carroll Carroll, who helped create the gel sleeve, was applicable to people. The sleeve "also soothed a painful prosthesis for Air Force Senior Airman Brian Kolfage, who lost both legs and his right hand in a 2004 mortar attack in Iraq. The sleeve sticks to Winter’s tail with suction the same way a rubber surgical glove grips a human hand."

With the sleeve in place, the prosthetic was placed on top of it and attached the new fluke to her peduncle. Winter re-learned how to swim like she had before, using the prosthetic as a cue to help her swim in her normal, up-and-down fashion. By doing this, Winter was able to work all the muscles that surround her crucial peduncle, allowing her to then still swim comfortably when the prosthetic is off.

Dolphin Tale the film took creative license, naturally, when bringing Winter’s story to the screen, but the essence of her incredible recovery was left more or less the same. In the film, Winter is found as she was in real life, tangled in a crab trap with no circulation to her fluke. She’s found by a boy named Sawyer (Nathan Gamble), who learns from a marine veterinarian (Harry Connick Jr.) that Winter’s tail will have to be amputated. What’s more, Sawyer learns that although Winter can swim without a tail, the shark-like side-to-side wiggle will gradually destroy her spine and kill her. So, Winter needs a new tail. What needs to be noted is Winter in the film was played by the actual Winter.

The CMA’s educational outreach exploded after the first film. They had been averaging around 78,000 visitors a year, after the film came out that jumped to 750,000. Yates has explained that the movie revolutionized the CMA, allowing them to expand their animal care areas, create new operating rooms, new labs, new kitchens and food prep areas, new pools, including the one that was built during production as a permanent installation for the first film, which enabled them to take in Hope.

Wait, but who’s Hope? Hope is the incredible true story behind the making of the sequel to the incredible true story. Producer Richard Ingber, the man who brought Winter’s story to the attention of Alcon Entertainment, never considered there could be a sequel. “In terms of movies, true stories are usually told and then you go home,” he said in the pess notes. 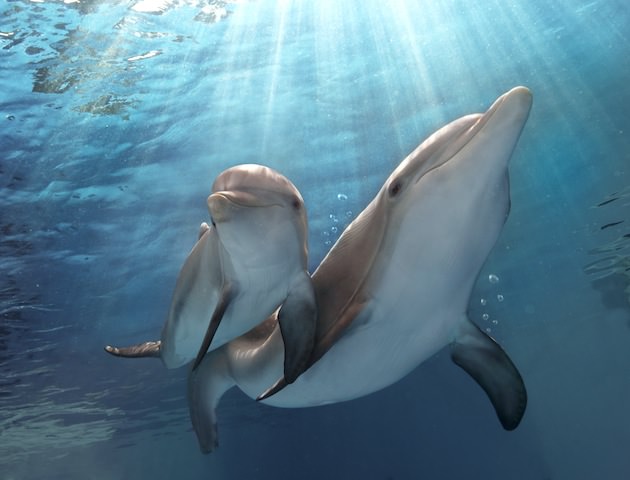 The cast and crew of Dolphin Tale had gathered for a wrap party back in 2010. “We were all at the wrap party when the aquarium got the call that a baby dolphin was in troubled and needed rescue,” Ingber said. “And there was a possibility that they could bring her to CMA.”

David Yates, the CEO of CMA and an executive producer on Dolphin Tale 2, said that the odds of this all happening at the Dolphin Tale wrap party were incredible enough, but the similarities between the two rescues were staggering. “They’re both Atlantic bottlenose dolphins; they’re both females; they were both about the same age when they arrived; and they were found in the same part of Florida by the same rescue team. The odds of all that happening are so small.”

The response to Dolphin Tale months later made the filmmakers reconsider extending Winter’s story with the new addition of Hope, who would now be Winter’s pool mate. Because Hope was stranded at such a young age she was far too young to have learned the life skills necessary to survive in the wild, so she will be joining Winter at the CMA for good.

Director Charles Martin Smith has said that he was thrilled to come back and show more of the great work that CMA does that didn’t make it into the final cut of the original film. “Especially emphasizing their mandate to ‘rescue, rehabilitate and, when possible, return the animals that come into their care to the wild.”