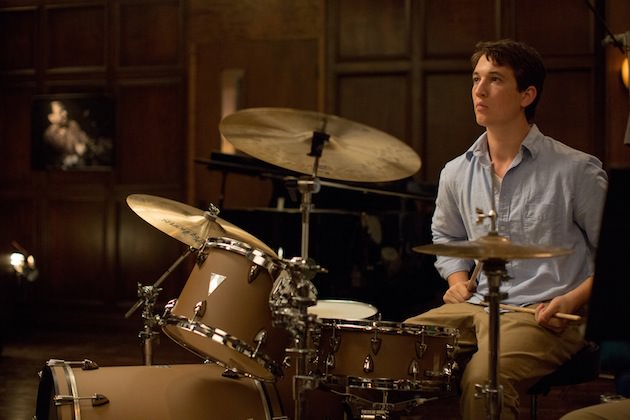 Composers Stand Out in Fall’s Most Exciting Films

Whiplash composer Justin Hurwitz recently told us that one his primary influences was legendary French musician Michel Legrand. "The early work he did during the French New Wave period, and on the Jacques Demy musicals, is some of my favorite film music ever. He's one of the most creative and inventive orchestrators alive."

This is coming from a creative and inventive orchestrator himself, who is a huge part of one of the most musically inventive films in recent memory. Hurwitz had another composer who inspired him, and his name is Charlie Chaplin. “The music he wrote for City Lights, The Gold Rush, Modern Times, The Circus, etcetera, they have some of the most gorgeous, most memorable melodies I've ever heard in film.  For me, it's not just a case of, ‘Wow, he did music too.’ I would honestly put him in my top five film composers of all time.”

Hurwitz is definitely on our list for one of our favorite composers of 2014. What he’s done on Whiplash, create an original jazz score that sounds like some of the best music from the 30s and 40s, is a major feat. Have a listen:

This is Hurwitz and director Damien Chazelle’s second feature that had music at its core – the first, Guy and Madeline on a Park Bench, was designed to be music forward (they didn’t have the funds to create “a visual feast” like the French new wave musicals they loved, Hurwitz said) – and now they’re taking the next logical stop. They’re making a musical.

“We did Whiplash, now we’re in pre-production on a musical at Lionsgate called La La Land. The story and music are original, not based on any IP or property.  It's a totally original musical in the tradition of Singing in the Rain for example, but we’re working hard to make it feel contemporary, of today.”

The fact that Lionsgate is backing La La Land from the jump is something to be excited about. Hurwitz explained that La La Land will be unique for contemporary cinema. “Most current musicals are based on stage musicals (like Chicago) or other properties, so it’s really cool they’re letting us do a totally original musical. Even the few other original musicals made today have diegetic justification for the music, like Once. Now I love Once, but the music is all on screen, as opposed to older musicals where orchestra just swells up behind the actor. Or take the film Enchanted from a few years ago, which I thought was great, but it had a high concept to justify the music — she was a storybook character. There hasn’t been a movie in a while where the music just swells up for no reason other than that the characters are moved and want to break into song." Hurwitz is definitely one of our new favorite composers.

We’ve interviewed a lot of composers since we launched in late 2012, and have learned just how crucial their part of the filmmaking process is (ditto the foley artists, sound designers, etc.) Documentarian Deborah Stratman, whose latest work laid bare the intricacies of a foley artist’s job, although film is a visual medium, filmmakers rely on sound to envelope, and sometimes overwhelm, the viewer. “If even if we think our vision is tantamount to our awareness,” Stratmant said, “sound can fool us much more than our eyes.”

This fall it seems like composers, and the sounds they make, are as varied and exciting as they’ve ever been. Along with Hurwitz, there’s a bunch of really sensational composers whose work awaits you at the theater, from the brilliant percussion on Birdman to the haunting score on Gone Girl to the meditative and moody sound you’ll hear in The Disappearance of Eleanor Rigby. There will also be whatever surprising brilliance Radiohead’s Jonny Greenwood conjures for his latest collaboration with Paul Thomas Anderson. He’s a quick sneak peak at the artists behind these scores.

In order to help keep the Birdman’s relentless momentum (the film feels as if it’s one, single take), editors Stephen Mirrione and Douglas Crise relied on a percussive refrain that followed Riggan (Michael Keaton) everywhere he went. And not just any drums, but those of Mexican drummer Antonio Sanchez, a world- class percussionist with four Grammys to his name, who joined director Aleajndro Gonazález Iñárritu in a rented studio for a week before principal photography began. There Sanchez recorded improvised takes based on some of the emotions and objectives the film needed, some 60 tracks worth of music. The director loved Sanchez’s work so much that he used it on stage at times to help the actors understand the rhythm of the scene.

The score for David Fincher’s Gone Girl will be Trent Reznor and Atticus Ross’s third collaboration with the director, after The Social Network and The Girl With the Dragon Tattoo. These three make a uniquely unsettling team, and if the first taste of this soundtrack is any indication, this film is going to crawl right under your skin…through your ears.

Haunting Melody in The Disappearance of Eleanor Rigby

A film based on the dissolution of a once promising marriage after a tragedy requires an equally haunting score. Who better than Son Lux (Ryan Lott), the musician behind Rian Johnson's brilliant Looper, a chameleon able to shift the tone and texture of his sounds .

Whatever the Score for Inherent Vice Will Be

We'll be seeing Paul Thomas Anderson's Inherent Vice at the New York Film Festival next Saturday, so we'll have to report back on the film and the score, which was done by one of Anderson's creative soulmates, Radiohead guitarist and film composer Jonny Greenwood. Greenwood has revealed that he composed the score for Anderson's adaptation of Thomas Pynchon's stoner detective novel with the Royal Philharmonic Orchestra, led by Clio Gould.