The Independent Film Project (IFP) is an organization that connects filmmakers with the resources they need to complete their projects. Founded in 1979, it’s the oldest and largest not-for-profit dedicated to independent film. This week, IFP is celebrating Independent Film Week. IFP represents a network of some 10,000 storytellers around the world, and helps them develop 350 new feature and documentaries each year, supporting projects from lesser known filmmakers to the likes of Michael Moore (Roger & Me, etc., etc.), Benh Zeitlin (Beasts of the Southern Wild), Debra Granik, (Down to the Bone) Miranda July (Me, You and Everyone We Know), and Ryan Fleck & Anna Boden (Half Nelson).

Countless legendary filmmakers began their careers making independent films (and some have stayed independent filmmakers throughout). Indie auteurs keep cinema fresh by challenging, often outright ignoring norms. Just this year two legends who lit up the indie world released films; Jim Jarmusch’s Only Lovers Left Alive reminded audiences why he’s so beloved, while David Cronenberg‘s Maps to the Stars is playing at the New York Film Festival a week from this Saturday. And just this week one of the most astonishing indie films of the 20th century debuts on the Criterion Collection—David Lynch’s Eraserhead. These indie filmmakers had such an impact on Hollywood that George Lucas initially sought both Lynch and Cronenberg to direct the final installment (at the time) of his space epic, Return of the Jedi.  In pure indie fashion, both Lynch and Cronenberg turned him down.

We recently spoke to the independent filmmaker is Sean Hartofilis, who wrote, produced and directed the feature Beach Pillows and is working on his next feature now. Beach Pillows is about the luckless, once promising Morgan Midwood, who moves back home to work in his father’s furniture store and save up enough money to buy his girlfriend an engagement ring. Things do not go to plan, however. Morgan’s girlfriend is less than faithful, and his carefree best friend, Nick, is less than sane, and as Morgan’s prospects dim his life begins to unravel. Then Nick has an idea, a revolutionary one at that, for a lucrative new item they could sell Morgan’s father’s store. That item doubles as the title to Hartofilis’s feature debut, a funny, bittersweet comedy that was ten years in the making.

Hartfolis is originally from Long Island, and attended Princeton where he took the few film classes offered. “Writing something, shooting and cutting it, I fell in love with the whole process,” he says. “I spent more time making movies in college than all my other classes combined.” He wrote the first draft of Beach Pillows in 2003, and it was optioned by Iron Films in New York. So far so good. Then he moved out to Los Angeles and began speaking with people at Reason Pictures, who bought the option from Iron Films. While they developed the project, Hartofilis made a short film. Then some time passed, then a lot more time. Then years. “I got to make the film ten years later,” he says. “It took a while to raise the money. All the while I kept the script alive, kept it current, I wanted to make it feel of a particular time and place. So while it was a frustrating ten years, it prepared me and made the script better. I spent years trying to get it going as my first film. Making your first feature without having made a feature is the chicken and the egg paradox.”

Hartofilis moved back New York in order to make it happen. “The movie is set in New York, and I figured we could make it there cheaply.” What he decided he needed to do was attach a few actors to make it marketable. “I thought I could raise the money on my own [with actors attached], and then my producer got the script to Geoffrey Arend, the kid from Super Troopers. We thought he would be perfect for a quieter lead role, and he’s so reliably funny we knew we wouldn’t have to work too hard on the comedy part.” One of the ways in which an independent film comes to life is through luck (which only smiles on those who put the work in first). This happened to Hartofilis once Arend came on board—he’s married to an actress by the name of Christina Hendricks, who works on Mad Men with Vincent Kartheiser. “So Geoffrey got the script to Vincent, and it took him a while to read it, but once he did he signed on. I got the confidence and momentum to package the rest of the film around those guys. It was a great way to do it, and it didn’t cost too much.” By the time he was done casting, Hartofilis had also managed to nab Richard Schiff, most well known as Toby from The West Wing and recently in Man of Steel.

Hartofilis describes Beach Pillows as a “brother’s keeper comedy about two very different personalities growing up and apart over the course of a summer on Long Island.” He was inspired by coming of age stories from his favorite artists, specifically F. Scott Fitzgerald and Ernest Hemmingway. This goes some way of explaining his book cover inspired poster for the film. 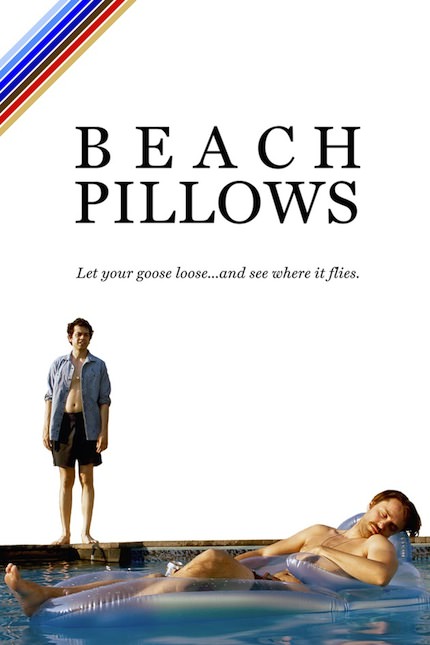 “I was inspired by ’This Side of Paradise’ and ‘The Sun Also Rises.’ I infused Beach Pillows with all the real stuff and emotion of my life. The ten years I struggled to make the movie put real struggle and disappointment into the movie. I was going through basically what these characters were going through. One guy’s the ego, one guy’s the ID. By the end of the movie, hopefully they learn from each other and become whole people.”

In order to cut down on production costs, Hartofilis relied on a time-tested indie film technique—calling in favors and using locations owned or operated by friends. Filming in Long Island, the two main characters houses were two of his best friends’ homes. For some of the city apartment interiors, he used the apartment he and his wife share, as well as their friend’s apartment downtown. “This let us keep costs of production down, gave us more creative control, and my hope was that the movie would be infused with the reality of these settings.” Although this was his first feature, and one of his stars is a major character on one of the most beloved shows on television, Hartofilis wasn’t afraid to ask his cast to get into the indie spirit. “Jeffrey and Vincent lived together throughout the shoot in an apartment in the East Village,” he says. “The basement in my apartment building in Astoria was our production office and wardrobe. The whole shoot had a family atmosphere.” Hartofilis also wrote a part for his friend from Long Island. “I wanted to ground these guys in the reality of the Long Island world.”

Hartofilis took Beach Pillows on a festival run, fittingly premiering at the Light House Festival on Long Beach Island. He won the Van Gogh screenwriting award in Amsterdam Film Festival, to boot. He readily admits his festival submission game wasn’t nearly as ingenious his filmmaking process. “We were blindly submitting to these big festivals without any inside horse—no sales agent, no studio rep…I would have loved to have been in Sundance, but I’ve always been encouraged by response to the movie and quality of the film. This was going to be a small movie regardless, so I’m just glad people are responding to it emotionally. “

His next film is a touch darker than Beach Pillows. “It’s set in upstate New York along the Hudson River, and it’s about a young man whose family is murdered and the killer’s found not guilty by reason of insanity, so the young man plots to break into the mental hospital where the killer’s being held in order to avenge them, potentially compromising his own sanity in the process. It’s something along the lines of Taxi Driver meets One Flew Over the Cuckoo’s Nest.” Whether it takes him two years or ten to make his next film, Hartofilis and independent filmmakers like inspire us with their dedication and perseverance.