Building the Sensational Sets of The Maze Runner

One way to jumpstart your film career is to create your own mini-masterpiece, have it blow up on YouTube, and force Hollywood to come knocking. This was the case for animator/director Wes Ball, whose 2012 short film Ruin grabbed the attention of 20th Century Fox. Ball was called to a meeting where the longtime animator was asked to take the reigns on an adaptation of a popular 2009 sci-fi YA novel. While there, he successfully pitched them to turn Ruin into a feature. Not a bad day's work.

Ball’s feature film debut is the adaptation of James Dashner’s bestselling 2009 novel The Maze Runner, a work that fuses elements of The Hunger Games, Lord of the Flies and Lost into a sweaty, breathless story of survival. Dashner has said, however, that he wanted to write a story about boys (and one girl) in an impossible Lord of the Flies-like survial situation in which, instead of turning on one another, they became more cooperative, more committed to banding together to survive. Also unlike Flies, the monsters in The Maze Runner are real.

In the film, Thomas (Dylan O’Brien) is the latest teenage boy to be deposited in the Glade—an oasis in the center of a vast Maze that is sealed off from the rest of the world by massive concrete walls. Thomas is greeted by a group of boys, all of whom made the same strange trip he did into the Glade, arriving with amnesia on a freight elevator that rose through blackness for what seemed like hours. The reason they’re there is one of the mysteries at the heart of the story, as is the function of the Maze, which reorganizes itself on a nightly basis.

The makeshift society the boys have created in the Glade includes ‘Runners,’ the boys who enter the Maze every day to map each new configuration in an ongoing effort to find a way out. They’re led by Minho (Ki Hong Lee), and their exploration must end before nightfall, as no Runner has ever survived a night in the Maze. This is primarily because of the existence of Grievers, colossal biomechanical spiders that patrol the Maze. After Thomas helps Minho and Alby (Aml Ameen) survive a night in the Maze, and the arrival of Teresa (Kaya Scoldelario), the first girl ever sent to the Glade, the social order begins to shift as the Gladers attempt to reconcile the sudden possibility of a different way of penetrating the Maze and surviving.

“They stood in a vast courtyard several times the size of a football field, surrounded by four enormous walls made of gray stone and covered in sports with thick ivy. The walls had to be hundreds of feet high and formed a perfect square around them, each side split in the exact middle by an opening as tall as the walls themselves that, from what Thomas could see, led to passages and long corridors beyond.”

As the rare animator/director, Ball was uniquely positioned to bring Dashner’s vivid world to life using CGI, but much of the film was shot with practical, handcrafted effects.

Both the Maze and the Glade were created in locations in Louisiana. Production designer Marc Fisichella, who recently was the supervising art director on X-Men: First Class, had to build something that would be both practical to shoot in and around, but also provide enough of a physical reality that, aided by CGI in post, would credibly create the harrowing world of the novel.

To create the Glade, the crew utilized a farm in St. Francisville, Louisiana, an hour or so from Baton Rouge. This lush, remote location was a perfect place to credibly recreate Dashner's Glade. In fact, perhaps it was too credible. Producer Lee Stollman explained in the press notes that the location was lousy with venomous snakes, mosquitoes, and horseflies. The production needed to hire a snake wrangler who removed dozens of lethal cottonmouths, tree rattles and copperheads during the three weeks of filming on the farm. He caught some 25 venomous snakes, another 35 non-venomous snakes, and one 5-foot rattler. This is to say nothing of the heat and humidity, the mud and the rain.

Another key element of the production design was the Map Room, the crucial location of where all the accrued knowledge built through the dangerous expeditions of the Runners is stored. Fisichella and the crew decided to put the Map Room in a secluded area on the property, not in plain sight of the Glade. They chose a spot deep in the woods of the property which was legitimately wild and overgrown. This allowed them to film the scene amongst shafts of light pouring through the foliage, adding a necessary sense of wild seclusion to the scenes.

“The Map Room’s centerpiece is the map table, which was one of my favorite pieces in the movie,” Fisichella said. “The Runners go into the Maze and come back with their notes and hand-draw maps, which they piece together on this big table, and when they connect them in a certain way, you start to see the layout of the Maze. I thought this would be a great opportunity for the audience to really get the scope of the Maze in 3D form. I thought, ‘wouldn’t it be great if the Gladers actually built a model of the Maze out of sticks and twigs, and that’s how they would document it?’ And we ended up with this really beautiful eight-foot table with a complete creation of the Maze with two and a half inch sticks, and they even did a miniature version of the Glade itself right in the center. It looks very primitive but it’s like a beautiful piece of art, and when you pull back on it, you can see how big this Maze actually is.” 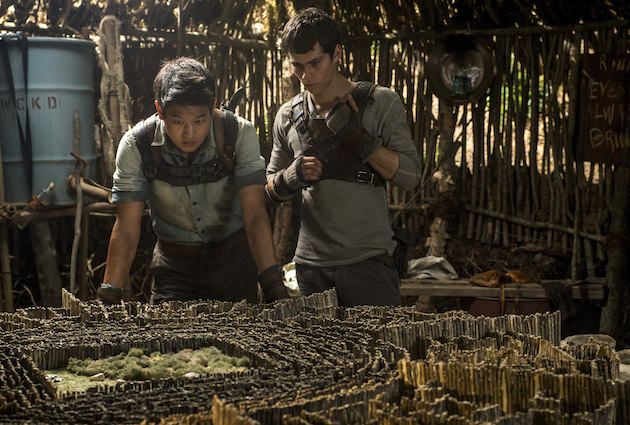 The crew also made use of a former Sam’s Club in Baton Rogue, Louisiana, where they built a 160-foot by 80-foot stage for the Maze. “In the movie, we have a lot of Maze, and of course we’re very limited as to how much we can actually create,” Fisichella said in the press notes. “I came up with a modular concept. We were able to rearrange it and create different corridors and intersections that would satisfy a lot of the blocking in the plot. With different layers of greens and vines and other elements, we were able to change the look of it enough so we could sell it as different parts of the Maze.”

Fisichella and his team built the Maze walls sixteen feet tall to allow room for lighting above. Visual effects then extended those walls to a hundred feet in post. One of the art department’s biggest engineering tasks was creating a set of practical gates for the Maze. “The doors themselves were each 20 feet deep and 20 feet tall, with a 20 foot opening,” Fisichella said. “They were mechanical, so they actually opened and closed on cue and we could have the actors running through them, which makes the film more dynamic than shooting it on blue screen.” The gates weighed seven thousands pounds each, and the doors were moved by the set’s visual effects crew. “It was a challenging installation, to say the least, since we did it out in a field far from our home base,” he adds.

One departure that Ball took from the story was to make the living quarters in the Glade the creation of the Gladers, rather than structures that were mysteriously present when the first boy arrived. Fisichella was determined to make each Glader’s hut look authentically built and, furthermore, different from each other. “The last thing I wanted was for each one to look like they were designed and conceived by one person. I wanted each one to have a personal touch, so we had different crews building all the different huts.”

All this work was done to ensure that audiences would get blissfully lost in the Maze, and want to return again when the second of Dashner's books is adapted for the screen.