The film adaptation of The Giver has been a long time coming. In fact, it has been in the works for 18 years since Jeff Bridges found out about the Newbery Medal winning book while searching for a part for his dad, Lloyd Bridges, to play. Unfortunately, his father since passed away in 1998, but Bridges was already engaged with the book and the idea of a movie.

“I said, Oh this is going to be a cinch to get made, over ten million copies sold in twenty-one countries, the money guys are going to go crazy over this,” said Bridges in a press conference at the JW Marriott Essex House. “That did not prove to be true.”

Now his daughters are in their thirties and Jeff Bridges himself has become the Giver. The film stars twenty-five year-old Brenton Thwaites and seventeen year-old Odeya Rush, the second of whom, Bridges notes, would not have been alive had production moved forward years ago. 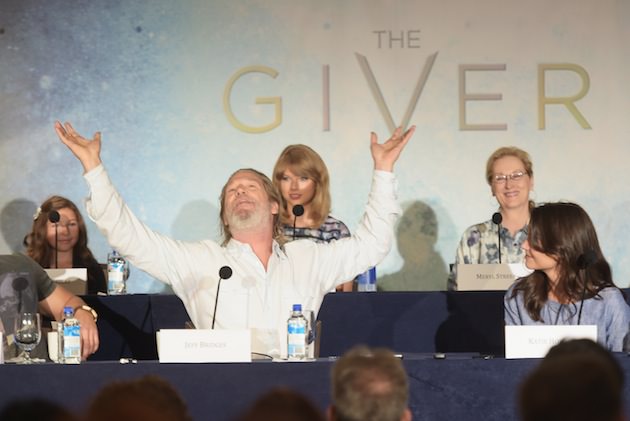 “I’m pleased it took this long because we got the right team,” said Bridges.

Though she jokes about her age, Lowry approved making the book into a movie years ago and has patiently awaited its debut. She has been greatly involved in the production, thanks in part to Bridges’s insistence, though writer Robert Weide remarked that she was “not precious about her words” when the two began discussing a screenplay during the early days of email.

The Wienstein Company finally took on the film, and Bridges and Lowry were at long last able to see their dream movie to fruition. Since then, the filmmakers were set with the challenge of creating the world of Sameness, where the novel takes place. The film was shot in South Africa and director of photography, Ross Emery, utilized black and white to portray the Sameness. In this dulled world, we meet protagonist Jonas who floats along happily in his colorless world.

Sameness is sterile. The buildings are futuristic in the way people thought of the future in the 1950s, inspired by Lowry’s childhood spent on military bases. Everything is clean, inhabitants don’t touch, lying is forbidden and everyone takes their meds. Babies are produced by society’s moms—conceived assumedly through in-virtro rather than the old-fashioned way—then raised in a giant nursery and passed out to designated Elder-approved family units.

The movie itself is a somber warning about a future dystopia where the passions of humanity are muted. Jonas, played by Thwaites, is the Receiver, responsible for receiving the memories of previous societies and using this information to advise the Council of Elders to avoid the mistakes that led to the near downfall of humanity. The Chief Elder, played by Meryl Streep, leads the Council of Elders, the ruling body of the community. Streep is perfectly dispassionate and logical in her quest to keep humanity from the pain of war, death and general suffering that led them to create Sameness. 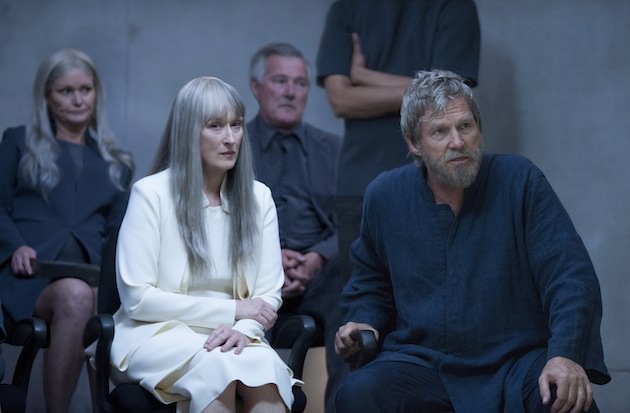 The foil to Streep and her stunted society is the Giver, Jeff Bridges, who remembers what humanity, nature and life were once like. He is responsible for giving Jonas the memories of past generations and to teach him about humanity. He sees life in color and remembers the feelings of both pain and happiness. The film utilizes flashes of color to portray Jonas’s increasing awareness of a world beyond Sameness. He becomes inspired by the thrills of experiencing music, dance and cultures from around the world. In a poignant moment in the film, the audience sees Jonas realize the word “love” has lost its meaning. Jonas attempts to ask his assigned parents if they love him and Mother (Katie Holmes) admonishes him for using an antiquated word the refrain, “Use precise language!” 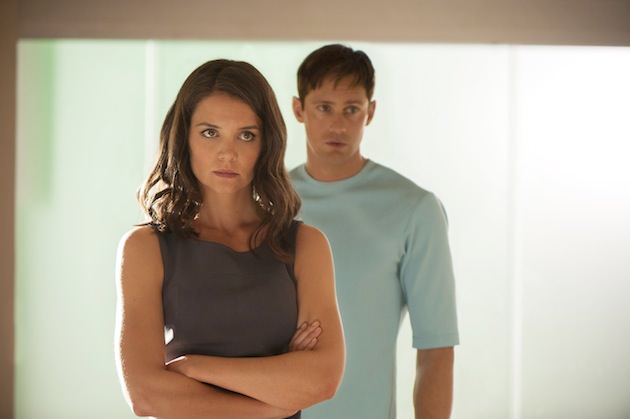 As he comes to understand how limited life is in a world where the community is drugged and numb, he decides to buck the limits of society and return his memories to everyone. His quest to reacquaint society with the emotions that mark human experience is met with confusion and skepticism from members of his family unit and Chief Elder. Streep's Chief Elder argues against the reintroduction of pain and sadness, asking why anyone would want to remember such emotions. She fears the violence and hurt that accompanies passion. His goal, to return both grief and joy to the community, is best explained in the words of Taylor Swift, who plays Rosemary, a previous Receiver who experienced too much pain and asks for “release,” a euphemism for death:

“In a world where right now I’m seeing so many of my fans write to me on Instagram and Twitter and letters saying that they’re having such tough time with life because they can’t imagine that we can experience such great pain, such intense loss, such insecurity, the thing I wish I could tell them over and over again is we live for these fleeting moments of happiness. Happiness is not a constant, it’s something that we only experience a glimpse of every once and a while but it’s worth it. And I think that’s what I take away from this movie.”

This message driving the film and the novel is universal, making it easy to understand its lasting appeal. One important difference between film and movie, though, is the character delivering this lesson. In the novel, Jonas is twelve years old. In the film, he is eighteen. This change has been met with a strong reaction by fans of the book, including Bridges and Lowry. When the change was originally announced, both star and author fought this decision.

“That was really a struggle for me to let that one go,” said Bridges.

In the end, both came to terms with the change because they were so confident in the choice to make the movie. Bridges decided to “surf the wave and see” because he couldn’t let go of the film. As a compromise, he reminded himself of the need to yin and yang—though he’s “mostly a yinner.” After his personal pep talk, he felt galvanized to stay with the project, speak his mind as needed, and just ride the wave. Whether fans feel positive about the change or not, this film was a labor of love and a well-intended production close to two decades in the making.

Featured image: The Giver (Jeff Bridges) and the Receiver (Brenton Thwaites) in 'The Giver.' Courtesy The Weinstein Co.