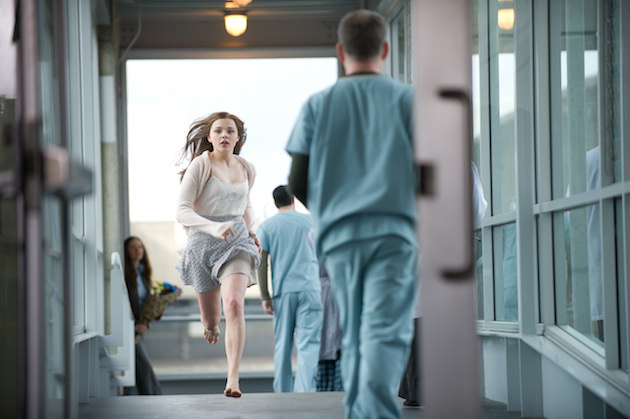 If I Stay’s Social Media Smarts

The rise of Nicholas Sparks was an early sign of the success to come (find me one female between the ages of 12 and 40 who hasn't seen The Notebook), but when The Fault in Our Stars bombarded the box office, the triumph of the traumatic romance genre was in full throttle mode.

It’s a simple story that we’ve seen take over the screens in the past decade. A best-selling young adult novel turns into a film with an overwhelming fan base. The latest, If I Stay, stars Chlöe Grace Moretz, beloved Hit Girl from the Kickass films, and Jamie Blackley from Snow White and the Huntsmen as her love interest. Not a bad bit of casting to attract tweens and adults alike.

Gayle Forman’s novel centers on Mia Hall (Mortez), a cello prodigy who believed her most difficult life decision would be choosing between pursuing her musical dreams at prestigious Juilliard, or, eschewing classical training for a more youthful track—following her budding rock star boyfriend Adam. A third path presents itself, of course, and it's a tragic one. A family drive turns fatal and Mia’s caught in a limbo between life and death. With memories flashing before her eyes, she finds herself in an out-of-body state where she must decide whether to wake up and live a difficult life, or, let the curtain close.

If I Stay embraces its heavy conceit, as The Fault in Our Stars did, with fearless sincerity. It also shares with Fault a hugely successful source text, which is currently number one on Amazon’s young adult best-sellers list. In order to capitalize on both the existing fan base and the age of the likely viewer, If I Stay has put together an interactive, exciting social media campaign that involves fans in the film and embraces the sharing/caring ethos of the story.

Here’s a look at a few components of the film’s social media campaign, which is both savvy and sincere.

Tumblr, the wildly popular platform where teens can plunge into a world of infinite scrolling, I I Stay's page is a thorough-going multimedia experience of photos, videos, fan art and more. Just as TFIOS took on the millennial-geared platform to keep fans involved in the film (one popular conceit is to count down how many days and weeks until the premiere with fresh photos and GIFs), If I Stay is following a similar approach, including videos that display Moretz and Blackley’s undeniable connection (and his peculiar dedication to a fresco ceiling). The Tumblr includes the latest tweets from fans, sharing (and one could argue, spreading) their excitement, feelings and thoughts about the book and film. Under the reblog section, there are photos of Mortez, the YA female icon (including her posing with a genuine smile for her fans), GIFs, quotes from Gayle Forman, photo sets created by the film’s followers and more. A fan art contest (more on this in a bit) asked followers to step up on their level of excitement for the film and create their own work.

The If I Stay Movie Network channel on YouTube includes exclusive videos from a look at Adam’s rockin’ band Willamette Stone to B-Roll footage. The videos allow fans to get some teasers at the “all of the feels” scenes. Moretz and Blackley posted their own funny behind-the-scene videos, whether it was Blackley singing along to "Uptown Girl" or taking a graceful fall while ice skating, they made sure to post their hilarious antics on the channel. Even in a film that will make you ugly cry, the videos showed how much fun and close-knit the cast became.

The Tumblr includes a weekly fan art challenge, where fans can post a piece of art dedicated to the film and it will be posted on the site. Art work includes graphics, photos with the novel and quote art. First-prize winners each week will receive a film poster signed by the cast and a Forman-personalized copy of the novel. One grand prize winner will receive a trip to Hollywood to attend the premiere of the film on August 20.

With over 142,000 Instagram followers, the photo-video based social media account includes pictures of the cast touring the country for the film (and posing with fans) and moments from the film like Moretz's lip curl, which got 14,000 Likes. On Emoji Day (which does exist, and is on July 17), they included two icons of a girl and boy, the former holding a cello emoji and the latter a guitar, to symbolize Mia and Adam’s musical connection and the universal love for adorably small cartoon icons. The idea was to invite fans to comment on the emojis with their own emojis that describe themselves, which you can bet they did which honed in on the importance of social media in the film’s interactive campaign.

If I Stay’s social media campaign may not be as massive as TFIOS (John Green, the author of The Fault in Our Stars, already had millions of YouTube fans and is one of the most social media savvy writers working) but it has, by all rights, done a fantastic job of stoking anticipation and excitement. There's got to be an emoji for that.