The entire process of filmmaking, from script to post, is about problem solving. The inviolable law of the medium is often Murphy’s Law, and filmmakers find themselves having to reverse course, rewrite, restructure, rethink their film due to some fresh problem. Yet, as David Mamet memorably wrote in one of his must read books on filmmaking (he has a few) “Bambi vs. Godzilla,” often it’s the problems that occur and their unexpected consequences that can make a scene, or even a film, great. “Near the end of filming a movie, I lose an important location, and several months of planning and preparation go out the window," Mamet writes "This, however, must be viewed as a blessing, as it forces me to, once again, reduce the scene from the pictorial to the schematic.” Mamet mentions Steven Spielberg’s confession after shooting Jaws that “the brilliance ascribed to him in withholding the appearance of the shark until halfway through that film must be credited, instead, to the mechanical shark, which refused to function when the cameras turned.”

So what does this have to do with The November Man? Based on Bill Granger’s novel “There Are No Spies,” the script by Michael Finch and Kari Gajdusek was five years in the making. The story is about an ex-CIA operative Peter Deveraux (Pierce Bronsan), code named 'The November Man,' who is lured out of retirement to protect a witness, Alice Fournier (Olga Kurylenko) with some potential explosive information. The November Man finds himself targeted by his former protégé, David Mason (Luke Bracey), and a chase through a complex, crowded city ensues. The script called for much of the action to take place in Berlin, where Deveraux and Mason’s cat and mouse game could take place in cosmopolitan epicenter of Germany, but costs for filming there were prohibitive. Producer Sriram Das visited a host of Eastern Europe’s capital cities before visiting Belgrade in 2012.

Like Luc Besson did with Taipei for Lucy, director Roger Donaldson found himself with a rarely utilized location that was a major boon to the film. Perched at the confluence of the Sava and Danube rivers, this city of 1.23 million might be lesser known to Americans (save for its importance as a central location of the Kosovo War in 1999), it is an ancient, beguiling metropolis. The city government of Belgrade, as well as Serbia’s, cooperated with the production, opening up key locations throughout as well as providing a top notch crew from the well established local film industry.  “We’ve seen Berlin a lot of times, but we’ve never seen Serbia in a commercial movie. So I was very enthusiastic about shooting it in Serbia,” Donaldson told Variety. “The Serbian people and the Serbian crew, nobody ever, ever complained about anything, they just worked their butts off.” In Andrew Barker’s review of the film for Variety, he wrote that the Serbian location was, “well-scouted and well-shot, with the film’s geographic specificity representing a nice change of pace from the often vague Eastern European settings employed in such films.” While the Serbian crew worked their butts off, even Serbian royalty were employed in the welcoming of cast and crew. When Brosnan arrived in Serbia to begin filming in May of 2013, he was greeted at the airport by the granddaughter of Princess Jelisaveta Karadjordjevic, reported Balkan Inside.

Much of the film was shot outdoors, utilizing the mixed cultural and architectural palette of the city. Production Designer Kevin Kavanaugh said in the production notes that the city's varied architecture allowed them to use the different character of the buildings, as well as the different colors and the mixture of the old and the new (Belgrade has been razed 44 times in its history), to dress their sets. “Detail is everything even if the audience doesn’t spot it, the actors need to be working in a set that feels authentic," Kavanaugh said. "We had the city as a huge back lot and it’s an incredibly appealing place to shoot.” 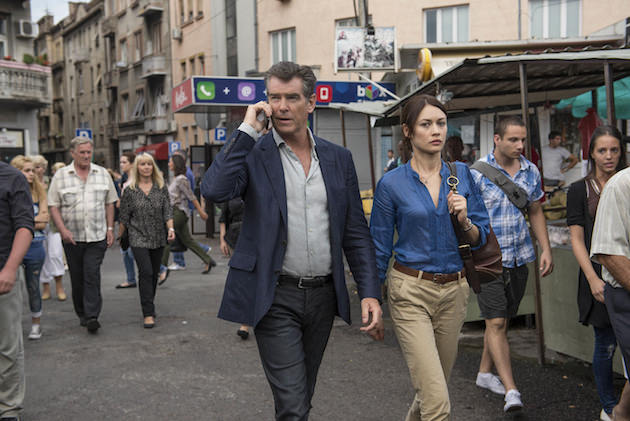 Because The November Man is essentially a chase picture, they shot all over Belgrade, following Deveraux’s movements through markets, cafes, train stations, alleyways, parking lots and restaurants. Some of the city’s most stunning landmarks were opened to the production, including the Serbian Parliament Building, City Hall, The White Palace and the Fort. Cinematographer Romain Lacourbas used the latest anamorphic lenses to soften and bring volume to the images. This gives the digital film an effect very similar to 35mm camera lenses used 30 years ago, which was appropriate for a film that has a Cold War style, with spies and femme fatales playing deadly games in an exotic city. 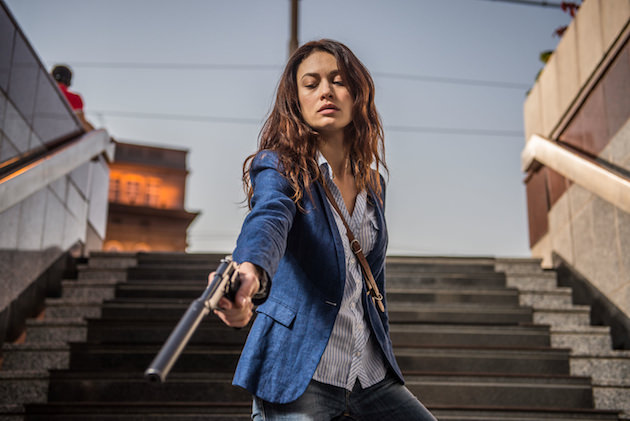 Lacourbas shot some scenes by using ‘tilt and shift’ lenses, which add a dreamlike touch to scenes by creating out of focus areas in the frame. Because the film is so swiftly paced and action packed, there was a lot of steadicam work as well as car and quad bike mounted camera rigs. In one thrilling sequence, Lacourbas had to shoot from the back of a motorbike to get the necessary speed and immediacy needed for a car chase.  Another complicated, and ultimately rewarding, sequence of shoots was from the perspective of a CIA drone – these were made possible by actual drones flying overhead and tracking the actors through the crowded markets and streets.

The November Man was further improved by the efforts of stunt coordinator Mark Mottram, who worked with Brosnan on three of the Bond films and also served as his stunt double. His core team of four included two additional stunt doubles, a stunt rigger, and a stunt utility bike and car specialist. A few of the more complex sequences required some 30 Serbian and Russian stuntmen joining the British team, specifically for car chases which required real precision driving through the often narrow streets of Belgrade.

Although practical effects ruled, the special effects team were still busy, especially when it came to two huge vehicle explosions and a car crash. One such explosion called for a van exploding thirty feet from the nearest building, where both Brosnan and Luke Bracey would be right there in the midst of the action.

The van was rigged to have two carefully timed detonations, one on each side, with the fan fixed so that no debris flew off and harmed anyone. The explosion was pre-rigged to blow twice. In the film it’s caused by Brosnan's November Man cutting a fuel line and shooting into the car to set it off, so the power of the blast needed to send the van skyward as well as produce a fireball. The SFX and stunt crew pulled it off, all while the citizens of Belgrade watched on.