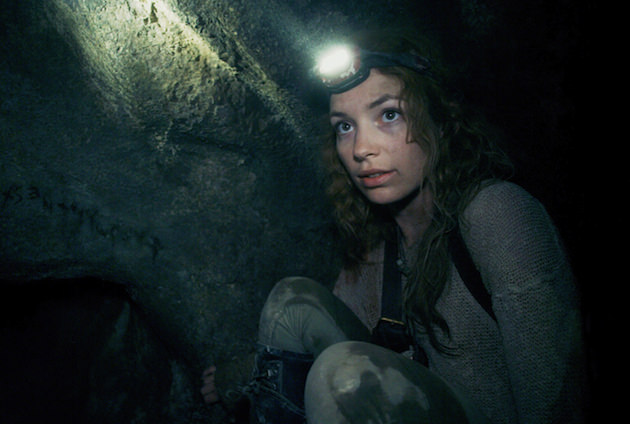 Filming in the Paris Catacombs for As Above, So Below

Imagine all your fears, mistakes and regrets returning to haunt you…while you’re trapped in a claustrophobic 180-mile underground cave system and mass grave. Apparently brothers John and Drew Dowdle found this premise inspiring enough to write Legendary and Universal’s new psychological horror film As Above, So Below. The same twisted minds behind Quarantine and Devil, the brothers are no strangers to inducing audience-wide panic attacks. Legendary CEO and As Above producer Thomas Tull called the Dowdles with the idea of setting a movie in the Paris Catacombs and the two filmmakers were all too happy to oblige him.

The low-budget film utilizes a set many productions would spend hundreds of thousands of dollars building: the narrow, winding tunnels of the Paris catacombs, complete with real skeletons artfully (some might say creepily) arranged centuries ago. This was the first production that secured permission from the French government to film in the catacombs. Only roughly a mile of the entire cave system is open to the public, and usually there’s a three or four hour wait to get in.

The premise of As Above, So Below is as simple as it needs to be—a team of explorers ventures into the catacombs in search of a historic find and instead end up coming upon relics from their own pasts in an increasingly confused, panicky nightmare. 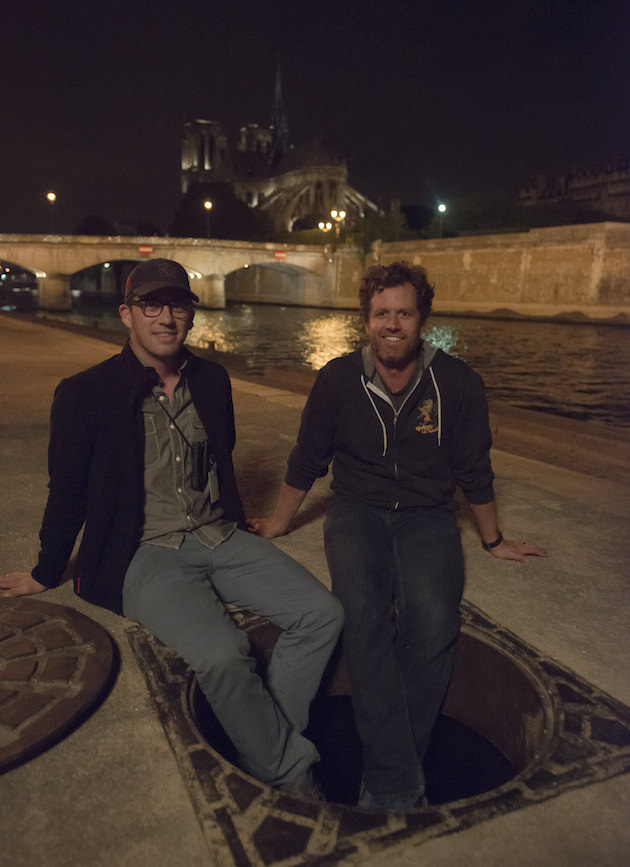 After getting safety clearance essentially guaranteeing the walls wouldn’t collapse and the air was fit to breathe, production was able to commence. The crew army-crawled their way through tunnels while actors donned head-mounted Panasonics in the narrow passages. Using a Red Epic camera, as well as a variety of cameras mounted on the actors’ helmets, the team utilized long single shots through the cramped, dimly lit space to help take the audience on a twisting journey deeper into the catacombs and, ultimately, the psyches of our characters. 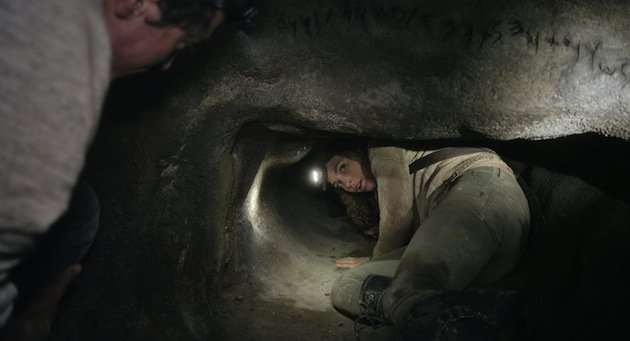 Scenes were often lit solely by the light off the cameras as the actors ran through the caves in a panic. Close at the heels of the cameras were the Dowdle brothers, running behind the cast with handheld monitors. The guerilla-style shooting helps give the film a recovered footage feel, like a modern day Blair Witch set underground.

Despite obvious spatial limitations and their location six stories below the streets of Paris, the crew managed to haul down a piano and car, which they later set on fire. As for other props, the goal was to build nothing and draw only from the environment around them. As the tunnels were narrow and filled with bones, this was not too hard. 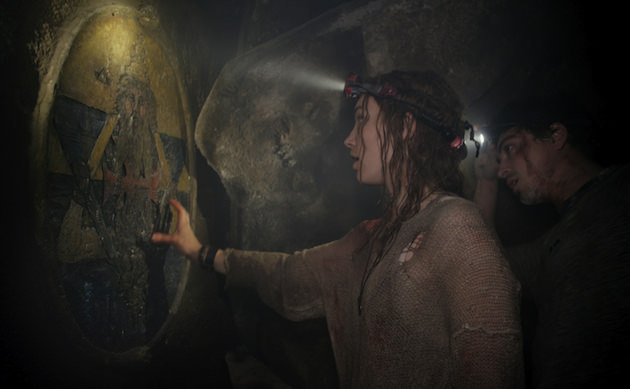 Unsurprisingly, there was no electricity or cell service in the centuries old catacombs, so crewmembers had to fend for themselves in the dark, tight caves. The shooting experience was legitimately creepy and exhausting itself, but created the perfect environment for creating a horror film.

And what a strange environment it is. Europe is rife with bizarre, haunting sites—bone churches and mummy-lined catacombs—but the catacombs of Paris are especially gothic. The 180-mile labyrinth houses the remains of six million people, outnumbering the living walking the streets above.

The Catacombs were created after Parisians repeatedly complained of the overcrowded cemeteries in the 17th and 18th centuries. Bodies frequently became uncovered, the area was unsanitary and residents were sickened by the smells (and germs). The turning point came after the wall surrounding Paris’s largest and oldest cemetery, Cimetière des Saints-Innocents, collapsed, sending a deluge of human remains into the surrounding neighborhood.

Thus began the 12-year project of moving all six million bodies underground into the old mines. Some of the ancient skeletons were over a thousand years old. Burials continued in the catacombs until 1860. The skeletons were originally placed haphazardly in the tunnels, but in 1810 head mine inspector, Louis-Étienne Héricart de Thury, was kind enough to arrange the bones in a manner more befitting a mausoleum.

Too add to the dark history of the caves, urban legend has it that in 1793, Philibert Aspairt, a doorkeeper at a local hospital, fled to the Catacombs during the French Revolution—never to be seen again. For eleven years, no one knew what happened to him until his body was discovered in one of the tunnels. He was buried in the catacombs where his body was found.

Parisians have since become fascinated with sneaking into the restricted tunnels. A distinct and rich counterculture of cataphiles (underground explorers) has flourished for decades. In the seventies, spacious areas of the caves were popular spots for drug-fueled parties. Over the years, people have scrawled graffiti, opened popup eateries, and even held raves in makeshift nightclubs. Artists have written raps about the caves and subterranean revelers have thrown countless parties. One nightclub is rumored to have had 1,000 people in attendance in one of the larger catacombs larger chambers. There’s an underground art scene and even a defunct restaurant-theater, found eerily abandoned.

Characters in As Above, So Below are infused with a similar spirit of exploration and adventure…until they find themselves trapped in the tunnels and fighting for their sanity.

Cataphiles may proceed with caution after watching the Dowdle's claustrophobic and seriously unsettling film.  Leader Scarlett (Perdita Weeks) braves the caves with archeologist George (Ben Feldman), filmmaker Benji (Edwin Hodge), navigator Papillon (Francois Civil), protector Souxie (Marion Lambert), and quiet Zed (Ali Marhyar). The group follows the footsteps of explorers who came before them, but find themselves in their own, personal Inferno. A striking sign that sets the stage and greets the characters (and, in fact, all visitors to the catacombs) declares Arrête! C'est ici l'empire de la Mort  (“Stop! Here likes the empire of death.”)

Obviously, it’s all downhill from there. The group begins the journey in the hopes of finding the fabled gravesite of alchemist Nicholas Flamel, believed to have been entombed with the Philosopher’s Stone (yes, the one Harry and Dumbledore keep talking about). But hope of power, life eternal and turning metal to gold that spurred the group to enter the empire of detah eventually devolves into madness. Soon they realize the stone is their only hope of survival as they face the horrors of their pasts.

At the heart of the film is the namesake mantra “as above, so below.” An occult maxim, the words follow the characters during their journey. To fight the fears that surround you, you must face your inner demons.

Featured image: Perdita Weeks in 'As Above So Below.' Courtesy Universal Pictures.