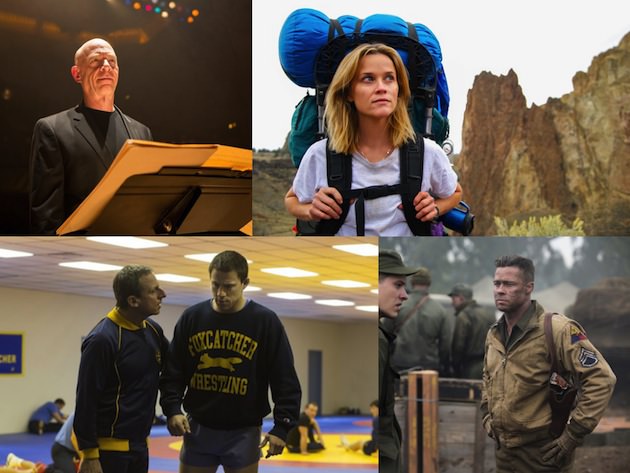 Extreme Personalities: Four Fall Films About People on the Edge

Sociopaths, addicts, battle fatigued soldiers trying to hold onto their humanity—yup, summer blockbuster season is just about over. The fall is packed with films everyone's excited about, from Christopher Nolan's Interstellar to David Fincher's Gone Girl. Here are four films we're looking forward to that involve people dealing with extremes, internally and externally.

“There are a lot of movies about the joy of music,” director Damien Chazelle said in his director’s statement, “But as a young drummer in a conservatory-style high school jazz orchestra, the emotion I felt most frequently was a different one: fear.” And fear is what J.K. Simmons, as band leader and instructor Terence Fletcher, instills in his students in Chazelle’s feature. We saw it when it was a short in last year’s New York Film Festival and were absolutely blown away by how potent it was. As a feature, we can’t wait to see what Chazelle did with the extra time–in the short, Fletcher was pure menace.

Following a tank unit at the end of World War II, actor Michael Peña said that Fury is a character study with action. The film tracks the battle fatigued unit’s brutal final days in the war, led by Don Collier (Brad Pitt), who has promised his men he will get through the war. As Michael Cipley wrote in The New York Times, Director David Ayer (End of Watch, Training Day) has created "one of the most daring studio movies in an awards season," in which we see American soldiers doing unspeakable things to make it through the last "great" war.

Steve Carrell as an unhinged, creepy billionaire desperate to prove to his withholding mother that he's capable of greatness? Yes. Directed by Bennett Miller (Moneyball, Capote) from a script by E. Max Frye and Dan Futterman, Foxcatcher was the most talked about film at the past Cannes Film Festival. Based on the true story of Olympic wrestler Mark Schultz (Channing Tatum) and his strange, ultimately tragic relationship with sponsor John du Pont (Carrell). Du Pont, the heir to a vast fortune and a troubled, wounded man, built a state-of-the-art wrestling facility on his estate determined to produce Olympic champions, as well as glory for himself. After luring Mark and his brother Dave (Mark Ruffalo) behind the gates of his sprawling property, Du Pont's motives, and Mark's own insecurities and confusions, led to a tragedy neither could foresee.

Wild is the adaptation of Cheryl Strayed’s memoir about going on a 1,100 mile solo hike on the Pacific Crest Trail after years of heroin addiction, the dissolution of her marriage and her mother’s death. Adapted by novelist and screenwriter Nick Hornby and directed by Jean-Marc Vallee, Wild stars Reese Witherspoon as Strayed, who co-produced the film with her own money so she could play a role she might not have had the chance to otherwise. “I’ve never seen a film like Wild where the woman ends up with no man, no money, no family, no opportunity, but she still has a happy ending,” she told Vulture. Amen.