If you have not seen Luc Besson’s Lucy but plan to, do not read this article. Just stop. There are SPOILERS AHEAD.

Towards the end of Luc Besson’s mind-bending Lucy, Scarlett Johansson's title character, having nearly reached harnessing 100% of her brain capacity, travels back in time. This capability, which was brought on by having a drug she was forced to smuggle, internally, leak inside of her, sends her back eons to the birth of the universe. In essence, you get to watch the creation of the earth in reverse.

What you're really seeing are exaggerated version of Hubble Space Telescope photography created by Industrial Light & Magic, with references including X-Rays, underwater imagery and MRIs.

The catch for the viewer, however, is we’re not able to follow Lucy on the path of total enlightenment. We are, after all, not on Lucy’s level, and so what we see up on the screen is beautiful, abstract, and beguiling.

Industrial Light & Magic illustrator Cody Gramstad was one of the people who helped bring Besson’s head trip into reality, including his idea for the very last scene. Gramstad walks us through the process of painting the birth of the universe, in reverse.

You have mentioned how a lot of the look of these sequences is based on marine life. Can you explain that a bit?

It’s a very saturated film, and this sequence came right from Luc’s childhood influences. He was very into marine life and diving, and that kept coming up over and over again in our discussions. So I used a palette built on the light that you would eventually lose as you got deeper and deeper. We start with orange and red and move down to greens and yellows, and as you go deeper and the light would stop refracting through the water, we’d pull out more light based off the spectrum. First you lose orange and red, then the next to go are the greens and yellows, and slowly we pull out different temperatures of color until we get down to the deep dark black and blues.

So tell the idea us of how the idea of Lucy being able to perceive the birth of the universe came about.

One of the early notes we received from Luc was that we would be travelling back through time until the moment of the Big Bang. He had certain key moments he wanted to capture, but the general idea was that the further back Lucy goes the more expansive her knowledge becomes. As the sequence progresses, we start losing sight of what we understand as she starts understanding more, until we end at a point where the audience can really no longer comprehend anything. 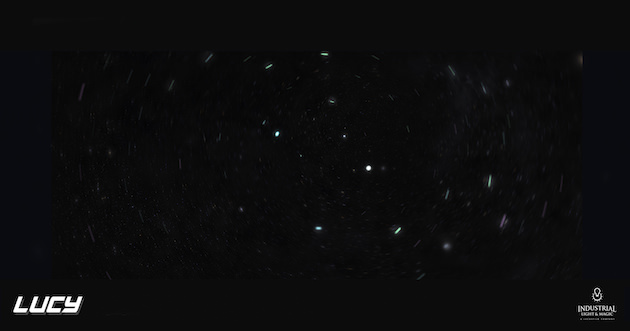 What are those colored dots that appear before the Big Bang supposed to represent?

For us working on the film on the VFX side, we were interpreting the big bang as less as the moment of origin, but as the moment that Lucy leaves us behind and we as the audience and normal humans can no longer interpret what Lucy’s experiencing. For us, that was the moment right before she disappeared, when everything is consolidated into a single red and green dot of information. The design of the cells that bookend the film is also based on this moment of the film.  They are both consolidations of information, and, because of that we wanted them to visually mirror themselves. After seeing the galaxy, which was the last recognizable part of her journey, we tried to pull out anything that would really give away scale so we could feel like a tiny speck in the broad expanse of the universe. We no longer see planets, and the stars become darker, less focused and more gaseous.

You described to me how Luc wanted us to see Theia, but what is Theia?

Theia is one theory of the moons’ creation that Luc wanted to use during his time travel sequence. It is the theory that the earth was impacted by another planet called Theia, which released debris into orbit around the earth and ultimately formed the moon. 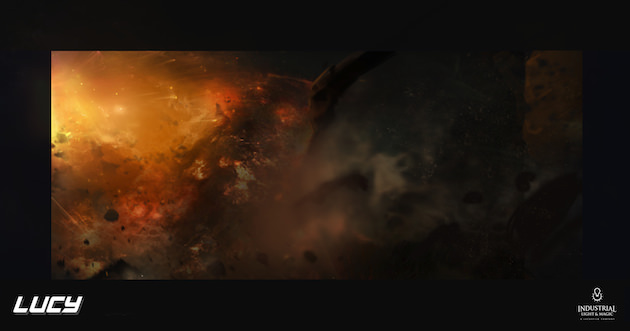 How did you create the space imagery?

Much of the space imagery was actually derived visually from an interesting and different approach.  One of our coworkers, Daniel Ferreira, started some of the designs for the nebulas by taking animated fractal shapes (fractal shapes and mathematical sets that create repeating shapes at every scale) and driving particle simulations through those shapes to create abstract nebulous creations that had a hint of “intelligence” to them. The major 3D fractal particle sequences were ultimately omitted from the film, but they were one of the major early influences of the look of the big bang sequence. I believe there will be a demonstration at Siggraph of the use of fractal rendering in film based on those sequences. 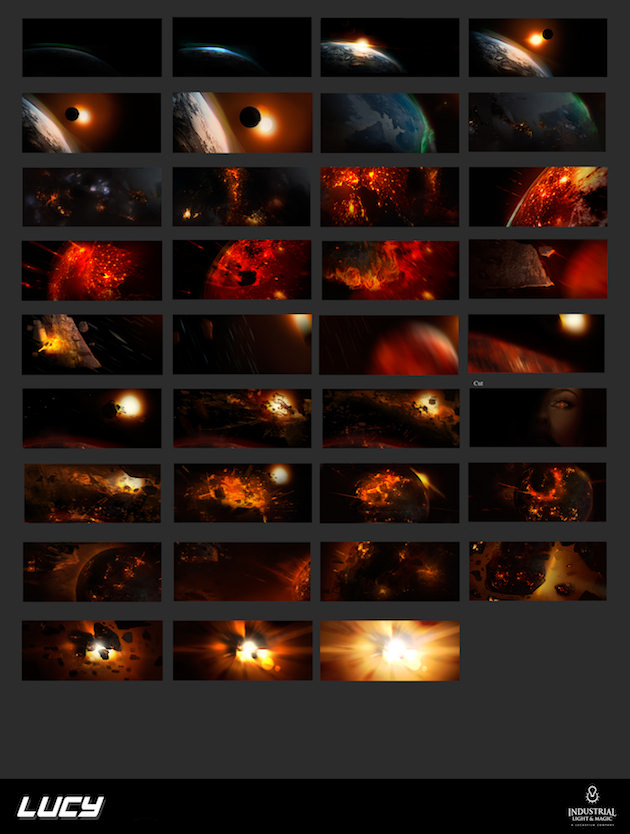 So the whole Theia sequence and Big Bang sequence is primarily about stripping colors from the palette?

Well, the first shot, which was the formation of Pangaea and the impact Theia, were built primarily off a red, orange and violet palette. The next shot, which was leaving the galaxy and nebula clouds, we’re transitioning through the orange, yellow, green part of the color spectrum. As the sequence became more abstract we ended on a dark blue palette. The final shot before we reach the big bang is meant to feel as if we are rising back up to the surface of the water. We follow the streams of light up to the surface, which is represented by the inverted space, where we reach the apex of brightness and color for our final decent to the moment of the Big Bang.