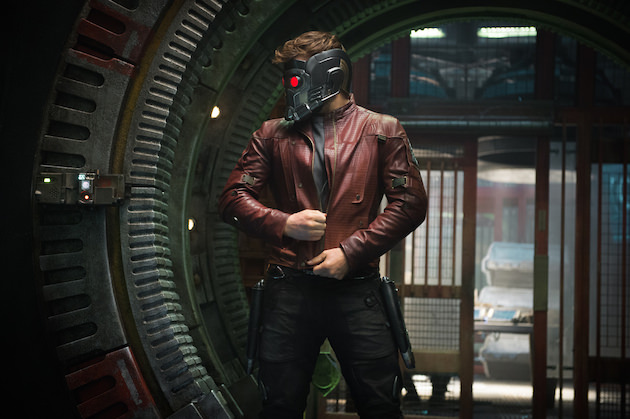 Costume Designer Alexandra Byrne on Gearing Up the Guardians

Oscar-winning costume designer Alexandra Byrne is a major reason why Guardians of the Galaxy doesn't look like your average space epic. Part of the film's appeal is its visual splendor and wit—along with all of the eye-popping special effects there is an undeniable charm and style on display that bring to mind Han Solo's timeless black vest and buttonless collared deep-v (also known as the pared-down space pirate look). From Peter Quill's leather jacket to Rocket's sleeveless armored vest to Gamora's battle-ready green bustier, Bryne crushed the unique challenge of creating costumes for various species of wildly different shapes, sizes and skin tones. Byrne was responsible for more than just the principal cast—she had to come up with the bespoke looks for an assortment of alien races, factoring in species, skin tone, weather, and culture.

Working closely with production designer Charles Wood, makeup and hair designer Elizabeth Yianni-Georgiou and special effects makeup designer David White, Byrne's work in Guardians helped fashion a sexy nether-world where the cosmos are filled with intelligent beings, some nasty, some nice and all nattily dressed in their own, unique ways. We spoke to Byrne to get the skinny on all those great jackets, vests and fingerless gloves.

You’ve had such a distinguished career, working in such a wide range of film genres. Is there a guiding principle you work under when deploying your skills on films as different as The Phantom of the Opera and Guardians of the Galaxy?

My starting point  is the same for any script, my job is to help the director to tell the story he wants to tell.

The look of the clothes in the film is not at all the nehru collar look of Star Trek, but a lot more varied, even grungy for some characters (like Quill, Yondu & Drax) —how much leeway did you have in interpreting the look of these characters as opposed to the comic book?

On a Marvel project the source materials are always the comics. I then expand my research into as many visual areas as possible with the aim of making a series of mood boards for characters and story moments. The images do not have to reference clothes, I look for varied and eclectic visuals that will resonate and inspire discussion. Sometimes it leads to ideas too far flung; I always refer back to the comics to check where I'm taking things.

Can you walk us through what your process was on Guardians? Obviously you work closely with the director, but what other departments do you strategize the looks of these characters with? How does your role change from pre-production into production?

Guardians was a very collaborative film, we needed to create entire worlds that were credible. So I worked closely with every department. And most closely with special effects make up—if a prosthetic simply ends at a T-shirt neckline then it's going to look like bad halloween.

How do you design clothes for characters that are not only different species, but different colors and entirely different shapes?

I use color as one of my main tools, and I realised on Guardians that my use of color is very instinctive. It took me a while to find my sense of color because we were using such strong colors for different types of alien skin tones. Equally, I didn't want to shy away from using strong colors in the clothes.

Tell us about Quill’s costume, specifically that leather jacket he wears—what was the thought process behind outfitting him? He ditches that jacket in favor of a tighter fitting, shorter jacket once he and the Guardians are teamed up… 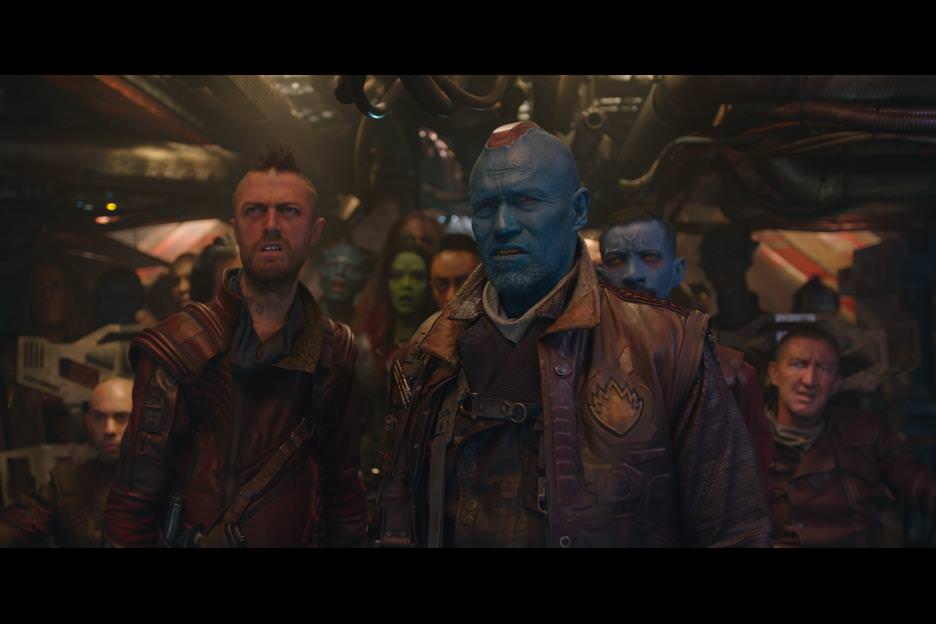 Yondu has a similarly cool look, which seemed to me like part biker, part bounty hunter. How did you devise his look, as well as his gang’s?

I wanted the Ravagers to have a distinct look—a coat type silhouette and a through line of color. But within that I also wanted them to be individuals with personalized looks. Yondu is the leader, the top dog, and a collector. Within all the Ravagers there are five generations of the ravager garb/uniform—all personalized, adapted and repaired. When the Guardians dress for the final battle they are wearing the latest Ravager garb. 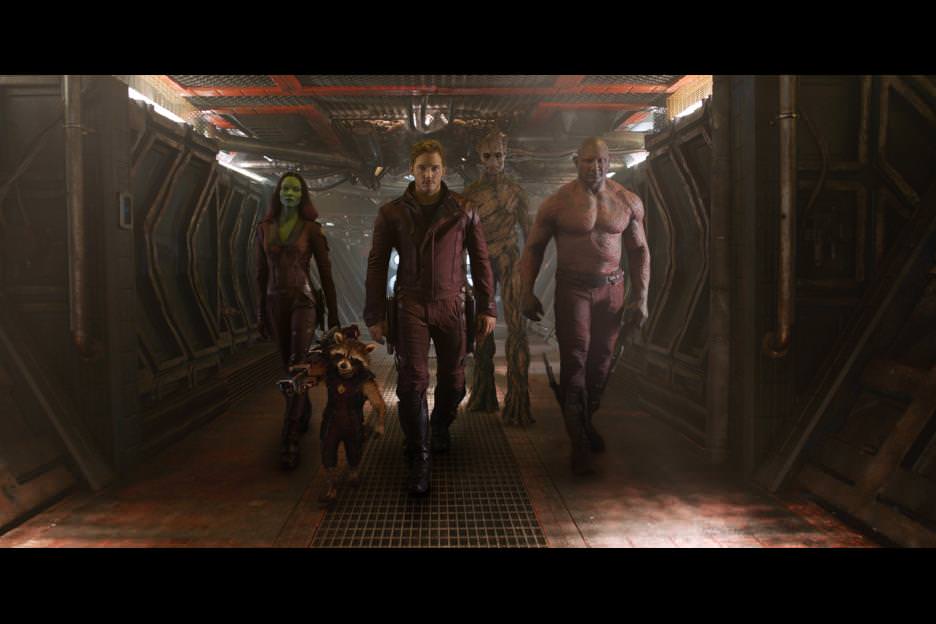 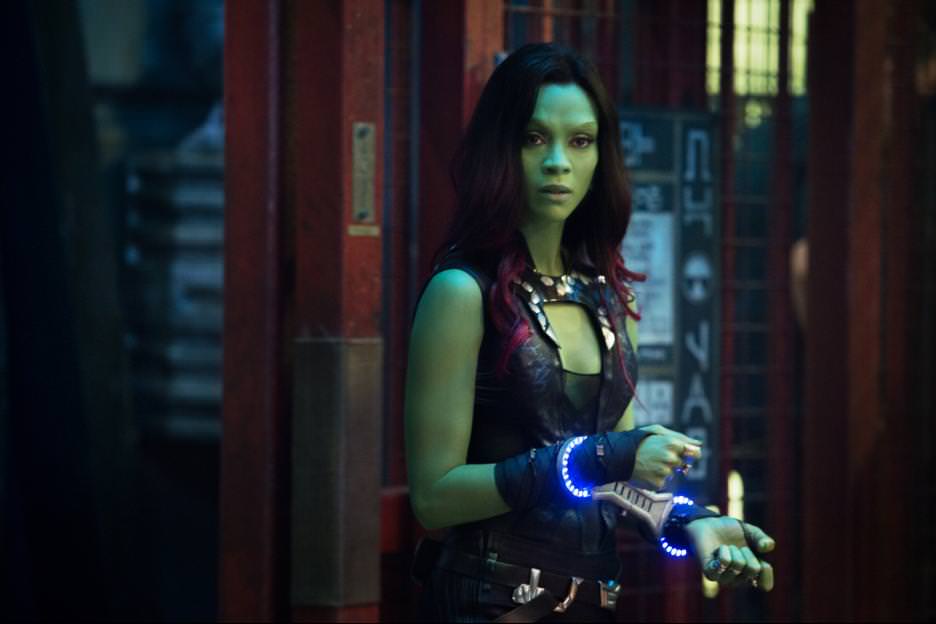 Gamura’s fingerless gloves/wrist covering are bad-ass—how did you create the look for this super assassin?

Gamrora's look is based in her looks across the comics. While working on her mood boards and designs, Zoe Saldana was cast. Once I know who is playing the part, then the designs can really start to develop because the actor brings ideas, shape, physicality and style of movement to the design. And then once we start fittings, there is the very practical aspect of movement, all these costumes need to move and behave in many ways.

Were there any materials that you worked with primarily on this film? Do any specific materials better suit a film of this scope with this much action?

I had the luxury of working with a brilliant textiles team on this project, people I have worked with for many years, so we were able to develop some very exciting finishes and designs. In practical terms, a fabric with good stretch and good memory is always useful in an action film.

You’re not new at films of this size—does your process change at all when working on a Marvel film compared to working on a smaller film like Finding Neverland?

Whatever the size of the project we always work hard, there is no end point when designing, ideas can keep evolving and growing. Experience means you get better at knowing when you need to stop the ideas and start making  so that the costumes are ready for filming.