Spoiler alert. For those of you not caught up with Boardwalk Empire, do not watch the video or read the below. 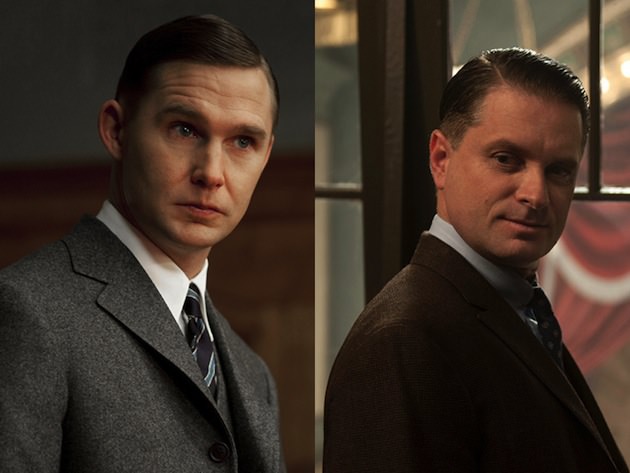 In one corner, you've got Agent Warren Knox (Brian Geraghty), the young comer at the Bureau of Investigation whose clean shaven baby face belies a murderer's malice. In the other corner stands Eli Thompson (Shea Whigham), little brother to Atlantic City's crime boss Nucky Thompson (Steve Buscemi), a former police chief, a murderer himself, but also a husband and father of eight with everything to lose. The two men enter the parlor in Thompson's home, but only one man can leave…

Before we revisit the most brutal fight on television last year, which leads us to Boardwalk Empire’s fifth and final season premiering on Sunday, September 7, let's take a quick look back. While not the cultural touchstone that HBO's previous mob series, The Sopranos, became, nor the darling of dark dramas like Breaking Bad was, or the beloved period pace Mad Men is, Boardwalk Empire has slowly, steadily built itself into a terrific series, and has delivered two absolutely thrilling seasons back-to-back. Superbly acted and written, as dark as Breaking Bad and filmed with a similar loving attention to period detail as Mad Men, Empire may not get the press and the buzz, but prohibition era Atlantic City is one hell of a place to spend an hour on a Sunday night.

Last year's season, the show's fourth, had a lot to live up to after season three’s explosive arc. Season three introduced us to a new, irresistible force of nature by the name of Gyp Rosetti, played with impassioned lunacy by Bobby Canavale. Everything we’ll learn about Gyp’s unhinged volatility and easily bruised ego are evident in the opening few minutes of season three. When we first meet him, he’s having car trouble as he drives along a deserted stretch of highway between New York and Atlantic City. A Good Samaritan offers to help him and does just that, but an offhand (and harmless) joke he makes is taken to be an insult to Gyp’s intelligence. Gyp beats the man to death with a tire iron. Then he steals his dog.

There were already plenty of outsized personalities on Boardwalk Empire before Gyp came along. Atlantic City boss and protagonist of the show, Nucky Thompson has always been, with a few lapses here and there, the show's most pragmatic and icy character. His brother and on again/off again lieutenant Eli, is a less controlled (and inarguably less intelligent) version of Nucky, a drinker, a brawler, with a chip on his shoulder and a family to feed. Yet it's been Boardwalk's periphery players that have always burned up the screen. Atlantic City's black leader Chalky White (Michael K. Williams), Chicago's very own Al Capone (Stephen Graham), and New York's contingent of Lucky Luciana (Vincent Piazza), Meyer Lansky (Anatol Yusef) and boss Joe Masseria (Ivo Nandi) are colorful, intelligent and determined gangsters. This is to say nothing of the likes of spooky former federal agent Nelson Van Alden (Michael Shannon), shrewd mobster-philosophizer Arnold Rothestein (Michael Stulhbarg) and the beloved, maimed, mask-wearing WWII veteran Richard Harrow (Jack Huston). And equal to all of these maniacs, movers and murderers is Gillian Darmody (Gretchen Mol), brothel madame and master manipulator.

Yet perhaps with the exception of Stephen Graham's Al Capone, Gyp represented the first Boardwalk character who walked off with nearly every scene he was in by the sheer force of his personality and the omnipresent danger that he might take offense to something said (or not said) and kill somebody. So when season three ended in a massive gang war in Atlantic City, with all the above mentioned players involved in some way, it wasn't surprising that the fuse had been lit by Gyp. He was too intense to live, even for this crew.

So how would season four top that? Certainly not with the arrival of the baby faced, milk fed Federal Agent Warren Knox. As played by Brian Geraghty, Agent Knox tiptoes into season four like a lamb seeking guidance from a pack of wolves. The young agent needs to learn the ropes of Prohibition politics between law enforcement and the criminals they’re nominally there to police, and most importantly, where the law falls on the hierarchy in Atlantic City (spoiler alert; below the criminals).

Initially dismissed as an uninformed weakling by the power players in the Boardwalk universe, Knox turns out to be a character more unsettling, and beguiling, than hot headed Gyp Rosetti. By the end the season, Knox had become one of the most chilling characters in the entire run of the show, a relentless, ruthless true believer out to destroy Nucky Thompson's criminal enterprise no matter what it takes, no matter who he might have to toss out of a window or shoot in the face. After seizing upon an opportunity to squeeze Eli, the lamb reveals the wolf inside as he turns the younger Thompson against his brother by using Eli's son as a pawn. In the season four finale, Agent Knox and Eli Thompson have an impromptu meeting at Eli's house. What happened next was one of the most thrilling moments in television last year.

In our above interview with Agent Knox himself, Brian Geraghty explains how they filmed that explosive finale scene, and how he and Shea Wingham managed to not kill themselves in the process.