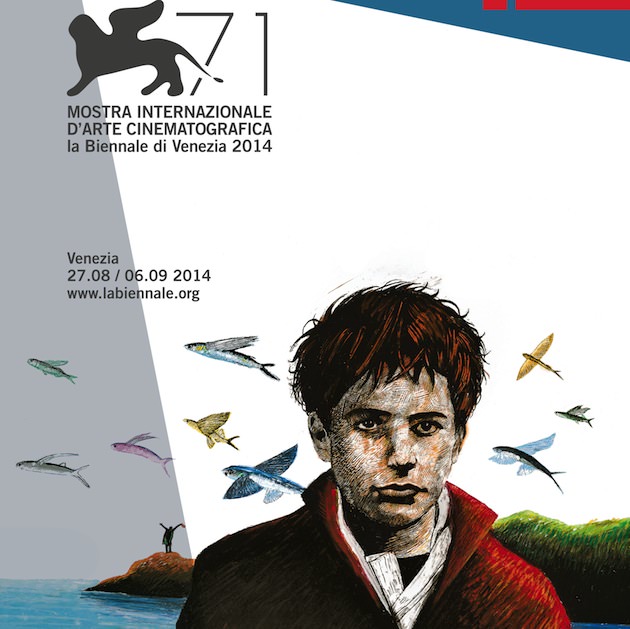 The 71st Venice Film Festival officially opens the fall festival season on August 27, followed just two days later by the Telluride Film Festival and, six days after that, the Toronto Film Festival (TIFF). There’s been a bunch of press lately over the recent announcement by TIFF’s artistic director, Cameron Bailey, that from now on only world premieres and North American premieres would be allowed to screen during the festival’s all-important first four days. TIFF’s decision is based on the fact that Telluride, and to a smaller extent Venice, has been nabbing Oscar winners and contenders a week before they arrived in Toronto. Last year Venice was the venue for Gravity’s world premiere, while Telluride nabbed 12 Years a Slave, among other major films, all more than a week before they played at TIFF. If you premiere in Telluride, TIFF's saying that you'll be moved to the tail end of their festival, when most of the studio players with purchasing power have left.

Venice Film Festival artistic director Alberto Barbera is not engaging in what Variety described as “the cinematic cold war” between Toronto and Telluride. “If there has to be this frenzy to have a world premiere at all costs, meaning that you’ll take a film just so that you can have the world premiere, that’s a game I’m not playing,” Barbera told Variety.  “There are plenty of great movies out there around the world.” Some 39 countries worth of great films are represented in Venice, from Azerbaijan to Taiwan.

Festival intrigue aside, the Venice-Telluride-Toronto festival cycle screens a huge majority of the films that will be competing come awards season, and Venice is showing 54 world premieres alone, after Barbera and his team saw more than 1,500 movies and winnowed them down to 55, with 20 in the main competition for the Golden Lion, awarded to the festival's top film. Here’s a sneak peak at a few films from that select 20 premiering at the first, and oldest, of the three major festivals in the coming weeks.

There's a lot to be excited about with Birdman, Venice's opening night film. Co-written and directed by the Mexican master Alejandro González Iñárritu, and starring criminally underused Michael Keaton, Birdman looks a whole lot lighter than Iñárritu's Babel or 21 Grams. Keaton is Riggan Thomson, a washed up actor who used to play the titular iconic superhero and is now attempting to mount a comeback on Broadway. The cinematographer is Emmanuel Lubezki, one of the best of his generation, and the cast is absurdly top notch, including Emma Stone, Ed Norton, Naomi Watts, Amy Ryan and Zach Galifinakis. It looks loose, wild, and lyrical.

Sivas is the only first feature competing for the Golden Lion, directed by Kaan Mujdeci who financed the film by opening a bar in Berlin (that should be a movie itself). The film focuses on Aslan, a eleven-year old boy in a unforgiving village in Eastern Turkey who saves an old fighting dog, Sivas, he finds wounded in a ditch. Aslan's love interest is Ayse, a girl who is being wooed by Osman, a rival and the son of the village head. Meanwhile, a recouped Sivas starts winning fights, drawing unwanted attention to Aslan and his new friend. The story of a boy and his dog is an old one, and in the right hands, it can be a great one, too.

Director Xavier Beauvois says of his film, "the idea here is not to retrace truthfully the sad epic of the two comrades, or to make a documentary film about an event that, in the end, doesn't really deserve such attention…but rather to slide, little by little, towards a bittersweet comedy of sorts." And what sad event is the story loosely based on? As the seventies come to an end, a recently released Flemish crook and his financially enfeebled friend are looking for a way to break free of their grinding poverty, and they think they've found it when Charlie Chaplin's death is announced. Why not steal the fabulously wealthy legend's corpse and demand a ransom from his family? We want a piece of the action.

Andrew Garfield stars as Dennis Nash, a Florida resident evicted from his home by a gun wielding, venal real estate broker Mike Carver (Michael Shannon). Nash is forced to move his mother and young son into a greasy motel, until an opportunity arises in which he can make some serious money, and possibly get his home back, by working with Carver in a criminal enterprise where banks, the government and hard working families are all marks. Director Ramin Bahrani said in his director's statement that "the common man around the world can no longer do hard, honest work and expect to thrive against systematic greed and corruption." With incendiary Michael Shannon as the face of greed and corruption, you can safely assume the common man has his work cut out for him.

Adapting a book for the screen is never easy. Director Saverio Costanzo took an interesting tack when he adapted Marco Franzoso's book—he never reread it during the screenwriting process. "That's how Franzoso's story accompanied me," the director said in his statement, "in the search of what has turned into a very personal tale." The story is about Jude (Adam Driver), and American who meets Mina (Alba Rohrwacher), an Italian, in New York City. They fall in love, get married, and Mina becomes pregnant. When complications arise, however, first with Mina's insistence that the unborn child is special and must be protected from all the pollution of the outside world, and then, with the child himself (he's not growing), the couple are plunged into a battle of resentments and suspicions while they desperately search for a solution.

Featured Image: Inspired by the closing scene of The 400 Blows by François Truffaut, the Venice Film Festival poster has been created by Simone Massi