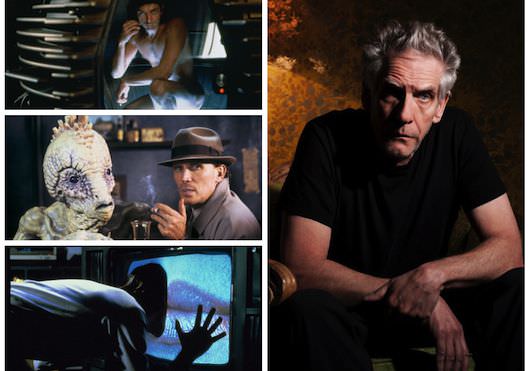 David Cronenberg has a new short film , The Nest, that was recently commissioned by the International Film Festival in Rotterdam. The film is a single shot, 9-minute take in which a woman (Evelyne Brochu) is undergoing a surgery consultation with an unseen doctor (voiced by Cronenberg). The short doesn’t have any of Cronenberg’s trademark visual potency—nothing molts, explodes, or mutates—but what it does deliver, in spades, is his fascination with technology, insects and the transformation of the body. Few directors could turn a brief consultation between a woman and her unseen surgeon into something this gripping and uncanny.

Cronenberg was recently rewarded with the Filmmaker on the Edge award at the 16th annual Provincetown Film Festival. He’s been on the proverbial edge his entire career. His latest film, Maps to the Stars, dives into the dark heart of a Hollywood, where aging actress Havana Segrand (Julieanne Moore) seeks a part her mother once played, while manipulating and psychologically mauling that most beleaguered of Tinsel Town residents, her assistant Agatha (Mia Wasikowksa).

Cronenberg’s last few films have relied less on the outright gore of many of his earlier works, from Scanners to The Fly to the more recent A History of Violence and Eastern Promises, but have retained all of his emotional and psychological intensity. A Dangerous Method, his look at the complex, hugely consequential relationship between Sigmund Freud (Viggo Mortenson) and Carl Jung (Michael Fassbender), was an emotionally and intellectually potent film that threaded the birth of psychoanalysis through a story of sexual compulsion and professional rivalry. His adaptation of Don DeLillo’s novel Cosmopolis, which took place almost entirely inside a bullet-proof limousine, managed to make a crosstown drive through New York City a riveting, grotesque plunge into the animal kingdom of capitalism, centered on a billionaire alpha predator Erik Packer (Robert Pattinson), who's increasingly surrounded by his furious, fulminating prey.

For a glimpse into Cronenberg’s mind, you can do no better than by reading his introduction to Susan Bernofksy’s new translation of Franz Kafka’s Metamorphosis. Cronenberg's fascinated by the way we all transform and the illusions we willingly live with that tell us we won’t. He likens Gregor Samsa’s awaking to find that he’s a giant beetle to his own recent discovery that he’s a seventy-year-old man. In many of his earlier films, the transformations took place physically, from the melding of man and machine in Videodrome to probably his most enduring film, the union of man and insect in his iconic adaptation of The Fly. Although he eschews the label “body horror” that’s followed him around for decades, he’s without a doubt fascinated by physical transformations as well as psychological, and believes that, contrary to being inhuman, insensate and cold, our increasing mastery of technology, and our adoption of it in ever deepening ways, is as human as you can get. We are not separate from our technology but a part of it, and it’s a part of us.

“In the 50’s sci-fi that I used to read, technology was sometimes literally from outer space,” Cronenberg said when we spoke to him in Provincetown. “Also metaphorically, it was from outer space.  It was inhuman, it was dehumanizing. It was mechanical, mechanistic. It was Fritzz Lang’s Metropolis. It opposes the reality of humans, it dehumanizes us, and I thought, wait, that can’t be right.”

Cronenberg explained that the separation of technology from humanity was backwards. “I mean, where does technology come from? It comes from us. We are the only creatures who really create technology. So I thought, it’s obviously us.  I am sure I was influenced by Marshall McLuhan and his teachings at the University of Toronto when I was there.” McLuhan, the famed philosopher of communication theory, predicted the creation of the Internet some thirty years before it came into being.  “He is the one who said that the medium is the message, and he had very interesting things to say about media, but also about the technology that evolved in media. I came to the conclusion, it should have been obvious, that technology is a one hundred percent an expression of us. That includes every aspect of ourselves, that includes the worst aspects of ourselves as well. Technology showcases our most destructive, hideous, atrocious parts, as well as our most beautiful and incredible and creative parts. And the kitchy, trashy parts. It’s no surprise that we get all of those things from technology.”

Cronenberg has created some of the most memorable film moments of the last thirty plus years out of his deep thinking our relationship to technology. His 1983 film Videodrome looked at our use of video to feed our insatiable voyeurism, where he memorably, and horrifically, merged man and technology into a grotesque union. 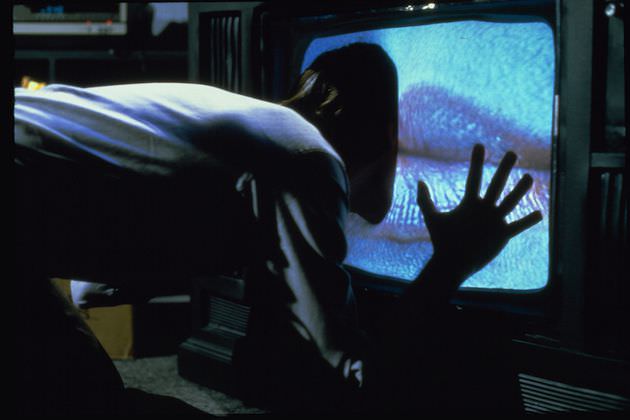 Cronenberg took man's mastery of technology, and all the wondrous and grotesque transformations it can abet, to a place of pure awe and terror in his remake of the 1958 sci-fi horror film The Fly. Jeff Goldblum’s obsessed scientist creates a wondrous new technology, the ‘telepod,’ only to accidentally merge his genes with a fly that he's unwittingly shared his creation with. When I asked him if he saw these transformations as monstrous, he made an interesting point about his own hybrid status. 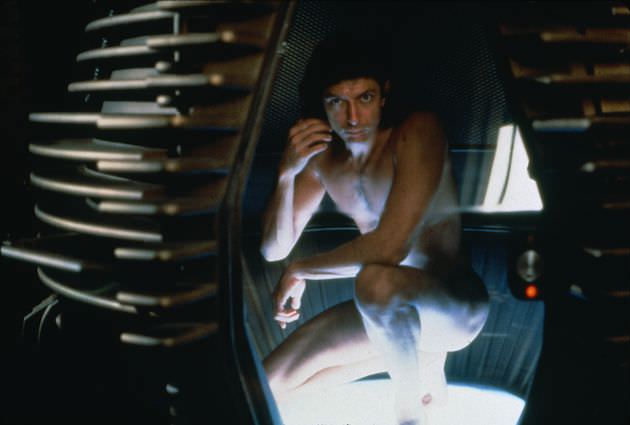 “I’m wearing hearing aids right now, this is my fusion," Cronenberg says. "I have six programs on this side," tapping his left ear, "and volume on this side," tapping his right ear. "I am sure one day I'll be able to connect to the Internet from my hearing aids. Its wireless technology that connects through my brain. I am grateful to it." Cronenberg told me that he probably wouldn't have even been able to do our interview if it wasn't for the technology he'd merged with, and that it's extended his career.  "You cannot make a film without hearing. So that is my understanding of what technology is."

While in his actual life Cronenberg finds technology more benign, and in the case of his hearing aids, life-supporting and crucial, in his films he's often weaponized the things we make. This has been done, he says, to serve a truth that is ineluctable in film—the need for conflict. "You don’t have a drama without conflict. Nobody wants to see a movie without conflict, where everything is perfect and nothing goes wrong.  Naturally, If I'm dealing with the relationship of technology or the influence of technology, there needs to be conflict." No one could ever argue that Cronenberg's films aren't suffused with conflict, from the limitations and mutations of our bodies to the perpetual warfare in our minds. The Fly, A Dangerous Method and Maps to the Stars are wildly different films that all share, at their core, the conflict inherent in our attempts to make sense of our lives and to control our own destinies. In Cronenberg's films, as in life, that is usually a losing battle.

When I asked him if this notion of constant transformation was something he saw in DeLillo's Cosmopolis that got him interested in adapting it, he said what we need to understand is that money is technology, too.

"Money does not exist outside of what we have invented. Darwin’s evolution is a kind of accounting, there are species that live and species that die, all depending upon how they manage the resources that are available to them. For example, if you're an insect, you give up something to have flight. You become lighter, allowing flight, but then you don't have the protective armor that an earth-bound insect would have. This cost analysis is not done by a human, its also not done by a god (for me), it's done by the pressure of the environment, where over time a species makes trade offs. Birds can fly, but their wings are hollow, and that puts them at other disadvantages."

And what about us? What kinds of trade offs does he see humans having made?

"We have taken control of our own evolution," Cronenberg says. "We are no longer living in the forest or on the plains. We are not influenced by environmental pressures. We are creating the environmental pressures, forcing our own evolution." He says that thanks to our reliance on technology, to cocooning ourselves from the pressures our ancestors dealt with in favor of new pressures (isolation, the disconnection of our omnipresent connectivity), our brains are no longer even wired the way they once were. "The brains of the ancient Greeks that we still refer to, like Aristotle, our brains are totally different from then to now. The neurology is completely different because of the pressures that technology has put on us."

When I asked him if he meant this literally, that our neurochemistry was totally different from an ancient Greek's brain, he said absolutely.  "There's a brilliant scientist named Gerald Edelman who won a Nobel Prize, and he says that the brain is much more like a rainforest then a computer. There's a struggle for a Darwinian dominance in your brain.  Some neurons dominate and destroy other neurons that wither and fade away. The brain is constantly changing. No matter how old you are, it does not deteriorate with age, or denigrate. Older guys who learn to use technology grow new neurons to deal with that.  Likewise, DNA is not static." Cronenberg says that DNA isn't a fixed property, but rather a set of genes in which many are turned off, but, can be "switched on and off in an incredible, infinite number of combinations." He says its our environment that determines which genes are switched on and off. A change in environment can mean a change in you, at the most basic level.

Our conversation ended where it began, with a reflection on how the human being is in a constant state of transformation. It's what many of his films have touched upon, and what his introduction to Kafka so eloquently and beautifully evokes. "We are constantly transforming. Life is a constant transformation. You really are not the same person you were ten years ago. On a cellular level, you are not the same person."

One thing that seems constant is Cronenberg's curiosity and the way it manifests itself in his films. Whoever he becomes next, he will certainly still be worth watching.

TAGSDavid Cronenberg Interview Maps to the Stars The Fly