Welcome to the new Credits

After a lot of thinking, tinkering and testing, we’re very excited to unveil our new website. Like an improved Iron Man suit, The Credits has upgraded its software, streamlined its design and increased its adaptability. We’ve now got a fully responsive design and layout. This means that whether you're loading up the site on your smartphone, tablet or desktop, you'll get the full expression of The Credits at your fingertips.

Under the hood, we're now using the latest techniques in CSS3 and jQuery for quick load times. To speed things up even more, we're using Ajax to load in content, which means content is refreshed on the fly without reloading the page. We've also implemented custom Google Search to better help you find content. On our full story pages, commenting is now available to post your thoughts.

As for the look, we wanted to bring some aesthetic excitement to the redesign via vibrant, energetic colors and bold type. While the original design featured muted grays and blues, we now have bright pops of chartreuse, salmon red, and teal grounded by a darker navy blue and black. The photos and videos are larger, too, allowing us to better show off the work of filmmakers and artists we routinely feature. 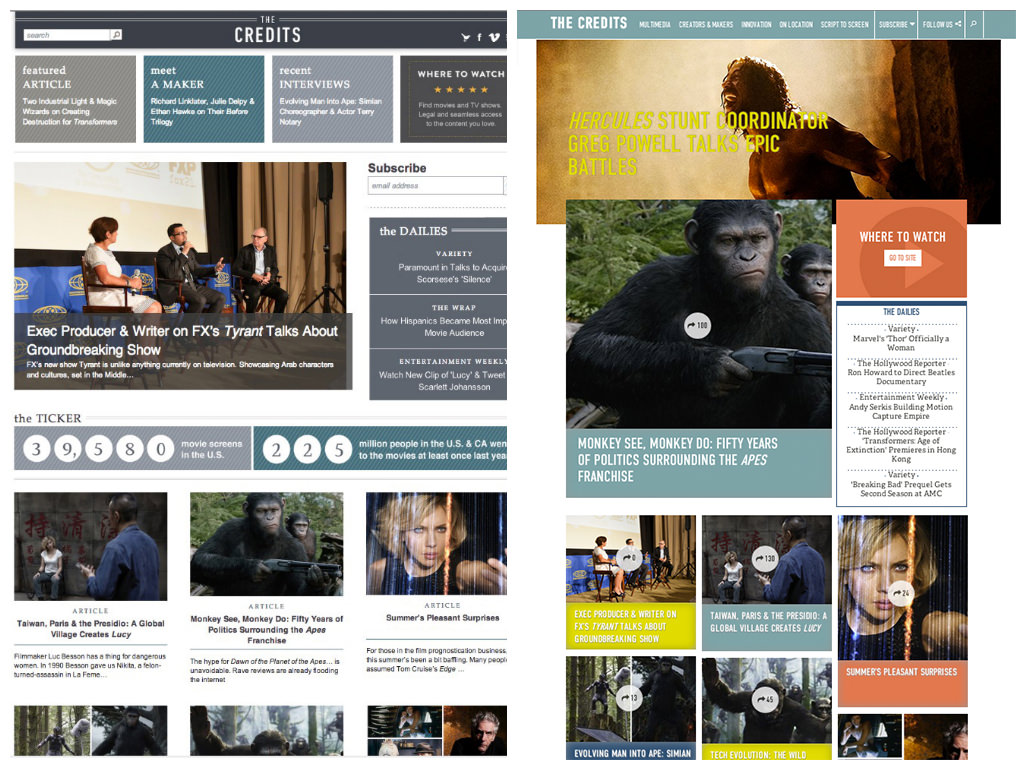 We have broken down our articles and videos into five categories: Multimedia (including videos and interviews), Creators & Makers (our interviewers with the people who make the films and television shows we love), Innovation (focusing on the always evolving technology behind film and TV), On Location (whether it's Pittsburgh, Cleveland or Albuquerque, these are the stories about what film and TV production means for local communities) and Script to Screen (articles about how films and shows are made, from that first idea to the premiere).

In short, the site is simply faster, smarter and more visually appealing. It was time to move on. While we'll always be fond of our original site, launched back in September of 2012, we're really excited to have a more appropriate platform to share our love of film and television, and the thousands of people who make it happen.