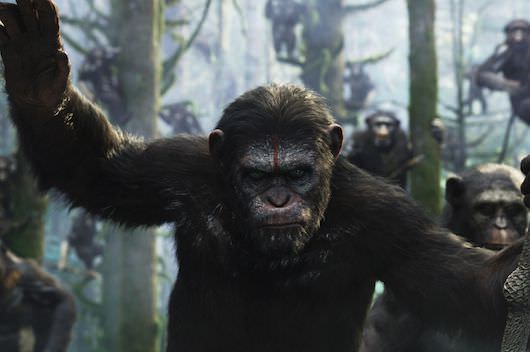 Tech Evolution: The Wild Ambition of Dawn of the Planet of the Apes

When director Matt Reeves took the helm on Dawn of the Planets of the Apes, he wanted his apes, which would far exceed their numbers in Rupert Wyatt's excellent 2011 Rise of the Planet of the Apes, to have an even greater level of emotional reality. Reeves was starting fresh with an entirely new cast of humans, but he retained some crucial actors from Wyatt's film, including performance capture extraordinaire Andy Serkis and two other notable ape performers, Karin Konoval and Terry Notary. Reeves also had an advantage—in the three years since Rise, Weta Digital, the visual effects house that has made so many incredible contributions to films over the years, has made a slew of technical advances and refinements that would allow Reeves to capture more apes, with a greater degree of photo realism and emotional resonance, than ever before. 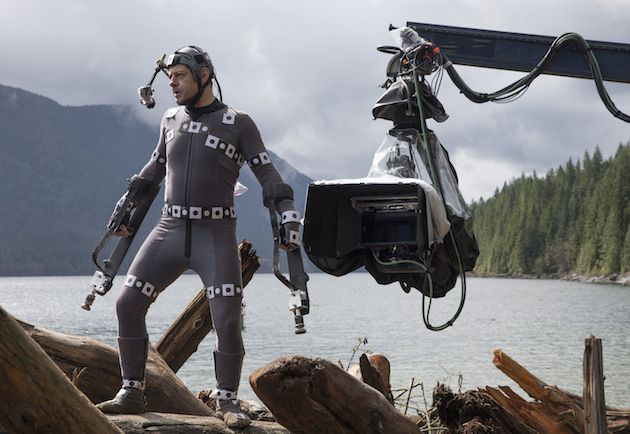 For Rise, the motion-capture technology had advanced enough to be able to shoot the actors using the performance capture suits in daylight (before, the reflectors that track their movements wouldn't work in the sun), as well as shoot up to six actors using the suits at once. For Dawn, the technology has improved, if not exponentially, than dramatically, and a fresh crop of ape actors, no doubt inspired by Serkis's incredible career, have helped create what Serkis has called the most ambitious performance capture film of all time. “My hope is that audiences—even knowing about the visual effects—will say, ‘Wait a minute. There weren’t real live apes in that movie at all?’” Reeves stated in the production notes.

In order to achieve this emotional reality, Reeves took a notion that began in Rise and increased it tenfold—the evolving intelligence of the apes and their ability to express themselves in more complex ways. He brought back Rise’s screenwriters, Rick Jaffa and Amanda Silver, who, along with Michael Bomback, created a story that would test the absolute limits of what performance capture technology could achieve. Dawn takes place ten years after the events in Rise, and in that time the simian leader Caesar (Serkis) has helped create a thriving, complex society in the woods north of San Francisco. The goal the filmmakers set for themselves is to remove almost all aspects of fantasy from their story—the only fantastical element in the film is that, due to genetic tinkering, the apes have become intelligent—their society, their interactions, the complexity of their relationships and their varied, singular personalities, the evolution of their language abilites—all of it needed to be completely realistic. 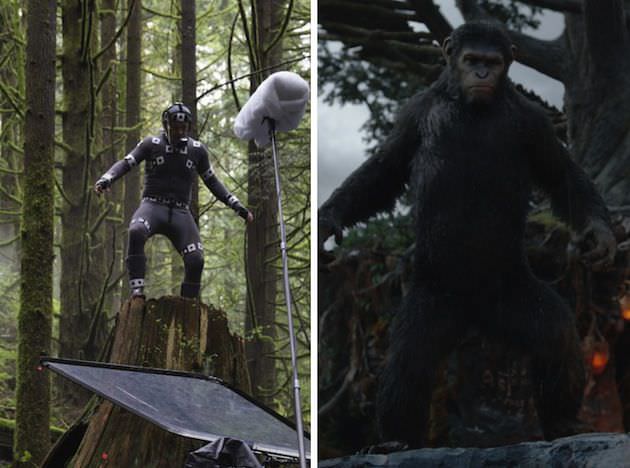 Much has been made of how much Serkis deserves recognition for his acting chops. He's not merely mimicking an ape in Dawn (and you could argue his performance as Gollum, throughout the Lord of the Rings trilogy and now in the three Hobbit films, is one of the most astonishing achievements in the entire series), but fully inhabiting a character every bit as challenging as his non-hirsute counterparts. Caesar is the star of this film, a fact that Reeves has said he reminded his screenwriters when they first approached him with a script more focused around the human dramas. Serkis's impact is such that many fine performers are adapting their skills to the specific, and highly difficult, challenges of performance capture. This includes newcomer Toby Kebbell, who plays the defiant, scar-faced bonobo Koba, a powerful presence who has his own ideas on how to lead the apes. 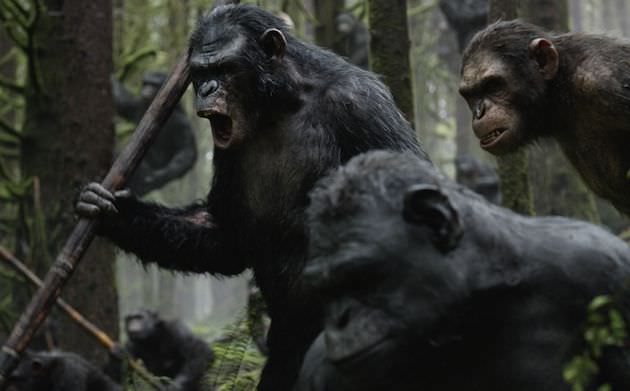 Kebbell and Serkis are joined by the aforementioned Karin Konoval and Terry Notary, who are back as Maurice, an ex-circus orangutan who serves Caesar as his wise and loyal consigliere, and Rocket, Caesar's most skilled combatant, respectively. The great actress Judy Greer donned the performance capture suit to inhabit Cornelia, a young female chimp who is Caesar's wife and queen, and the mother of their child. 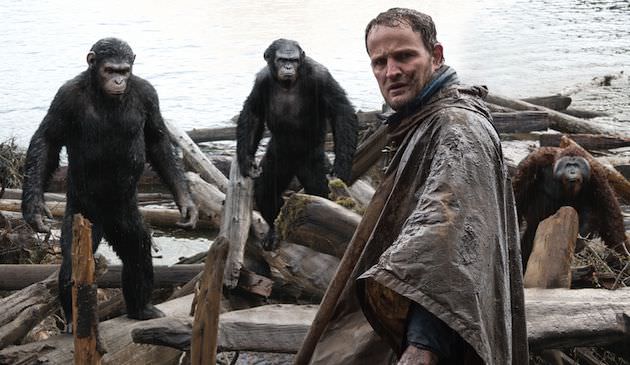 One component of the production process that helped Dawn achieve its realistic look was the use of outdoor locations. We spoke to location scout Catou Kearney, who took us on a tour of some of the lush Canadian rainforests she helped find to double for Northern California and serve as the apes forest sanctuary. By shooting outside rather than in front of a green screen or in more manageable (but less interesting) interior sets, the filmmakers allowed the actors portraying the apes to interact directly with their human counterparts. Serkis has said that the decision to shoot outdoors gave his fellow ape actors a “huge technical leap that enables there to be no disconnect with the other actors.”

The performance capture work that turned the human actors into the fierce, intelligent, complicated apes was on a scale many times greater than what was attempted in Rise. Not only were they filming the bulk of the production outdoors, fighting the elements (first rain, then humidity, always uneven ground, trees, rocks and wildlife), they were depicting a community of some 2,000 apes while shooting native 3D. Serkis said that this combination has never been attempted at this extent.

The performance-capture actors (there were 50 of them) all wore form-fitting Lycra suits that are covered in reflective markers. These markers are the points on the actors bodies that are captured by approximately 50 mo-cap cameras that were arranged (and re-arranged) for every single scene in which an ape actor was performing. They also had eight witness capture camaras that never stopped rolling on any scene involving an ape. Some 35 Weta Digital personnel were put on each unit to make sure the entire production ran smoothly, and, that all the moving parts cohered into a single compelling narrative. The cameras triangulate the actors movements, which are then fed into a computer program that creates a three-dimensional avatar that replicates their every move. Weta Digital’s senior VFX supervisor Joe Letteri says in the below featurette that Dawn’s ambition was unparalleled. To do performance capture shooting in a forest, where every tree is a potential obstruction to the camera that needs to see every single thing the actors playing apes were doing, meant having to painstakingly arrange and re-arrange the dozens of cameras for every movement. The wireless cameras, however, allowed the filmmakers to forgo the need to lay and maintain cables.

The cameras mounted on the skull caps Serkis and co. wear pick up their facial expressions. Then it’s up to the visual effects team at Weta Digital to take the actors performances and translate them into the orangutans, bonobos, gorillas and chimps who populate the film by transferring them into photorealistic ape models. The technology that Weta brought to bear on Dawn is much more sensitive than ever before. The hair, skin and moisture simulations they could run on Dawn were merely prototypes and “wouldn’t it be cool?” dreams of just a few years ago. Something as striking as the condition of the apes fur, from dry to damp to soaking wet, requires incredibly sophisticated technology to achieve. It wasn't possible at this level just three years ago.

In 2011 The New Yorker's David Denby, in his review of Rise of the Planet of the Apes, wrote that it was "one of the few films to use digital technology for nuanced dramatic effect." Dawn sought to utilize digital technology to further the possibilities for the seamless cohesion of the digital and the human. And if this isn't as important to you as, say, just watching a really kick ass film, The Hollywood Reporter's Todd McCarthy writes of Rise, "In the annals of sequels, Dawn is to Rise of the Planet of the Apes what The Empire Strikes Back was to Star Wars — it's that much better."