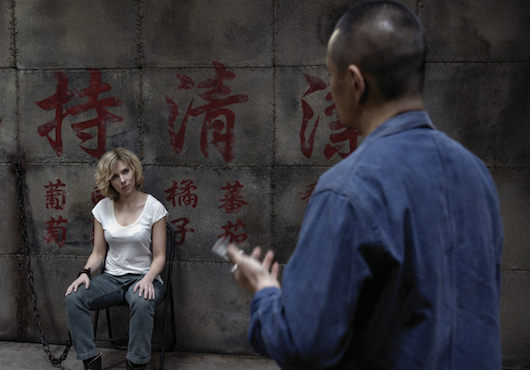 Filmmaker Luc Besson has a thing for dangerous women. In 1990 Besson gave us Nikita, a felon-turned-assassin in La Feme Nikita. Four years later he came back with The Professional, in which a young girl named Mathilda (Natalie Portman) is trained by professional assassin Léon (Jean Reno) after her family is killed in a police raid. And three short years after that, Besson created his most powerful woman to date, Leeloo (Milla Jovovich), in his color saturated sci-fi romp The Fifth Element. 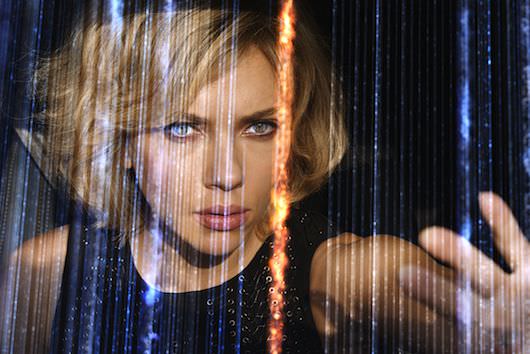 For his latest film, Lucy, a script Besson had been noodling with for more than a decade, he's created perhaps his most potent female character of them all. Played by Scarlett Johansson, Lucy isn't trained in the dark arts by an assassin/mentor, nor is she a cosmic weapon, but rather a regular young woman who's forcibly turned into a drug mule, only to have the drug leak into her bloodstream and give her access to increasing percentages of her brain. Every jump in percentage gives Lucy fresh insights and new powers. Before long, she's manipulating reality like Neo while serving up vengeance with the undeniable cool of Jules from Pulp Fiction (while still looking like Scarlett Johansson, no less).

In order to build some credibility into his story, Besson contacted Neurologist Yves Agid, co-founder of the Brain & Spine Institute based at Pitié-Salpetriére Hospital in Paris. Besson decided that the drug Lucy would be forcibly fed would actually be a natural substance produced by pregnant women in the sixth week of natal development, called CPH4. The idea was that this drug would unlock the vast potential inside all of our brains. "Lucy begins colonizing her own brain, accessing 20 percent, 30 percent, 40 percent…she can’t stop it, she doesn’t want all this power and she doesn’t know what to do with it," Besson said in the production notes.

Besson came up with a chart that Johansson could follow so she could match her performance to the percentage of brainpower Lucy was accessing. “For every ten percent, we charted out what you could do with that percentage,” Besson said. “It was a very good guide. Every morning she’d look at the chart to see which girl she had to play. If you look at Lucy at the beginning and the Lucy at the end, they have little in common.”

In 1997 Besson was on a promotional tour for The Fifth Element in Taipei, Taiwan. He felt an immediate connection to the city and its people, and this is where he set much of the action in his first version of Lucy, written ten years ago. After considering several Asian cities for budget and logistical reasons, the production ended up right where Besson had intended, even the very hotel he hstayed in 20 years ago.

Taipei hasn’t been used all that much by filmmakers. The Taipei Times reports Martin Scorsese will be filming there for his upcoming Silence, about two 17th century Jesuit priests facing violence and persecution in Japan, but Besson is beating the drum for more filmmakers to utilize the city. Taipei presents something of a filmmaker’s dream—within 100 miles you have skyscrapers, ocean, forests and mountains.

Once Lucy flees Taiwan, she ends up in Besson’s hometown, which goes some way to explain how he was able to shoot a wild car chase going the wrong way on one of the busiest and most famous streets in Paris, the Rue de Rivoli. Besson filmed thet chase in the middle of summer when there are fewer people on the streets, sending his heroine down the busy four-lane, one way street between the Louvre and Concorde Square, at top speed, against traffic.

Besson utilized his nine-studio facility for the wholesale destruction that occurs around Lucy at practically all times. He shot several key sequences inside his 102,500 square foot Cité du Cinéma, just outside of the city. This is where Besson and his team recreated portions of the Sorbonne, each of which would need to be hole punched by bullets and obliterated by explosives. Besson, who dropped out of college, poured more than 2,000 rounds of bullets into the Sorbonne’s walls, the faces of its sculptures and the marble floors. “The funny thing is that the Sorbonne is all about knowledge, but I dropped out of school at an early age to make films. Now, here I was, making a film on knowledge and intelligence and destroying the ultimate embodiment of self knowledge.”

Cité du Cinéma filled in for not only the Sorbonne, but also interiors of a luxurious Taipei hotel suite that would also undergo some explosive remodeling. Lucy involved more than 1,000 special effect shots, which meant that there was another location Bresson would have to utilize to see his vision through—the Industrial Light & Magic headquarters in San Francisco.

Senior visual effects supervisor Nicholas Brooks oversaw the process of turning Lucy’s world of manipulating matter into reality. When the conceit of your film is an ordinary woman becoming capable of bending reality to her will, it requires wizards not only of sight but sound. Skywalker Sound’s Shannon J. Mills, whose work has made blockbusters Avatar and Titanic a sonic spectacle, worked with sound editor Guillaume Bouchateau and two-time Oscar winning sound mixer David Parker (The Bourne Ultimatum, The English Patient) to make Lucy as mesmerizing on the ears as it is on the eyes. Besson also managed to get Blur and Gorillaz frontman Damon Albarn to write a new song for the film, "Sister Rust," a melodic ballad that closes Lucy's epic story.

Besson likes to get involved in every part of the production process thanks in large part to having worked in almost department before he became a director. Whether he's touching up some fake blood or going over the set design, the director is involved deeply in the film because he has such a clear vision of what he's trying to accomplish. What Besson does most often on set, however, is hover by the camera or hold one himself and commune with his actors. "I like to be very close to the actors. I've realized that when you say, 'Action,' it's like sticking a syringe in the actor's arm. It's an anesthetic. Between the moment you say, 'Action' and 'Cut,' he's on an anesthetic. He's someone else. So I don't want to break that."

Besson's made a career of creating films that are like shots of adrenalin themselves. He's been a writer on all of the films in the hyper kinetic Transporter series, as well as the writer/director of Taken 2, and Lucy appears to be another mad dash of a film. Yet Professor Agid, the man Besson sought out to ground some of his film in reality, said after watching the film that Lucy is a "contribution to knowledge on the brain." Agid believes the film will inspire people to want to learn more about the brain, our most crucial organ and the one most shrouded in mystery. "I want people to come out of the film and say, 'Oh my God! I'd love to find out more about the brain and intelligence," Besson said.