Playing With Fire: Chadwick Boseman is James Brown in Get On Up

Some lives seem almost too perfectly suited to be portrayed on the big screen. The larger-than-life figures whose existences seem endlessly dramatic, enjoying the highest highs—success, adoration, fame, fortune, romance, and the lowest lows—shame, disgrace, and the specter of death. These individuals often turn out to be nearly impossible to portray successfully on screen. For every winning portrayal of an icon (Denzel Washington as Malcolm X, for example), there’s a dozen or more than seem to suffer from the responsibility of plausibly portraying an outsized personality, of capturing the spirit inside them that burned so brightly.

The rising star Chadwick Boseman has now played two such figures, portraying one of the titans of American sport and a central figure in the fight for Civil Rights, Jackie Robinson, in 42, and one of the most iconoclastic musical figures in the history of American music, James Brown, in Get On Up. He has managed to play both men without being swallowed whole by their legacy and, in the case of Brown, his potent, explosive personality.

Much has been said about Mr. James Brown, quite a bit of it by the man himself. He has been involved in some 26 films in his long, historic career, from concert films like James Brown: Man to Man (1968) and James Brown: Live in East Berlin (1989), roles in The Blues Brothers (1980) and Rocky IV (1985), to documentaries like When We Were Kings (1996) and Glastonbury (2006). Yet Tate Taylor’s Get On Up is the first attempt at a proper biopic of one of the most influential musicians in history.

Mr. Brown, as he instructed most people to call him, lived a complicated life that influenced a host of major musical movements since he burst onto the scene 60 years ago. A self-made man, Brown’s career spanned the Civil Rights Era he seemed practically destined to be a part of. Indefatigable, defiant, gifted and self-destructive, Brown’s career was both incandescent and shrouded in darkness—he was a superstar, he was a perfectionist who demanded loyalty and a work ethic to match his own, he was incarcerated (multiple times), he demanded a strict no drug policy amongst his bandmates but battled drug addiction himself, and his volatile temper included several domestic abuse charges. He also inspired millions, including musical luminaries like Michael Jackson, who was such a big fan that not only was his music influenced by Brown, he even copied Brown’s casket—a 24 karat gold masterpiece that cost $25,000 and weighed roughly 500lbs. Boseman’s task was to credibly inhabit not only the supremely talented performer in Brown, but also that Brown with the insatiable appetites and violent temper. Brown always claimed, not credibly but with intense conviction, you could learn all you needed to know about him from his music.

Brown was a perfectionist and a punishingly demanding front man. He took each performance so seriously that he fined musicians if they played a wrong note. He’d also ask them to improvise mid-show, without warning. Boseman captured Brown’s spirit excellently, but more than that, the movie reveals the rewards that accompany such gruelingly high standards. Get On Up shows that along with the exacting demands he asked of his players, Brown brought out the very best they had to offer by pushing those around him (and himself) to their absolute limits. 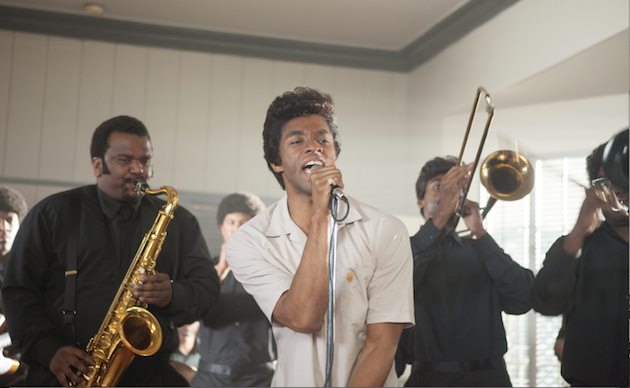 These high stakes, high-energy performances quickly became legendary. Brown and his group stole the show wherever they performed. One such instance was at his famous 1964 concert on The T.A.M.I. Show. His performance was a showstopper, which was unfortunate for the band performing after him, a little group called The Rolling Stones. Keith Richards later claimed in an interview that choosing to follow James Brown and the Famous Flames was the biggest mistake of their career. 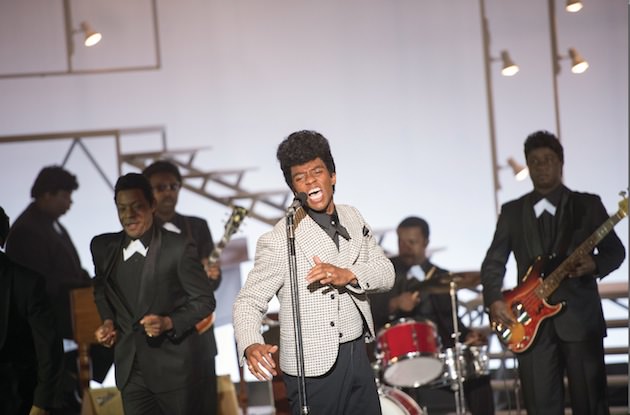 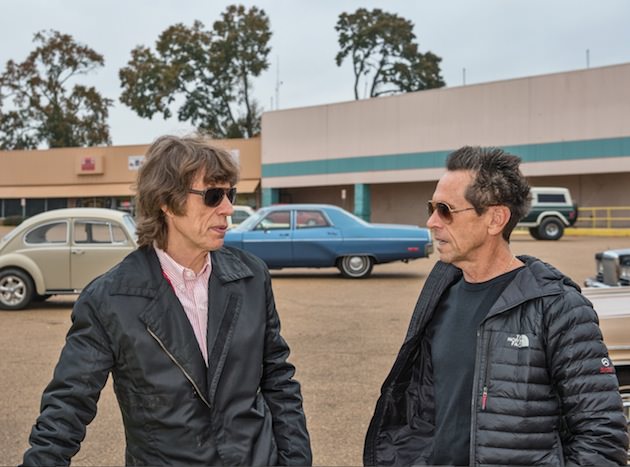 In the film, this moment is juxtaposed with a scene that flashes backwards in time to a young Mr. Brown getting arrested for petty theft. The film utilizes a fluid timeline to portray the extremes Brown encountered, especially growing up poor and black in the South.

Brown’s activism took center stage during a crucial moment in the battle for civil rights. In 1968, the day after the assassination of Rev. Dr. Martin Luther King, Brown was scheduled to perform a concert in Boston. The country was racked with riots and fires following news of the assassination, and law enforcement prepared for even worse the next day. Despite the danger, Brown chose to continue with the concert, which was televised, and many believe that focusing on Brown’s powerful, peaceful tribute to MLK saved Boston from the upheaval occurring elsewhere. At one point, fans stormed the stage and security quickly became riled up, but Brown rightly told the police that he could handle it and continued the show. Director Tate Taylorcaptures the crackling emotions of the night, recreating the charge of the performance by directing the actors to sing and play live on top of the backing tracks during filming, then utilizing recordings of Brown’s voice for the final sound. Music was a vessel that night to convey the mourning felt throughout the African American community and by all who supported MLK. Brown’s music held valuable social and emotional power, a power Get On Up strives to capture.

But in the late 70s, Brown’s success began to slow and his songs fell off the top charts. He remedied this issue with a performance in the 1980 film The Blues Brothers. With his career back on track, Brown enjoyed a renewed burst of fame that including a parody on Saturday Night Live, signifying his wide reaching appeal. In a routine that helped make his own career, Eddie Murphy came out with the well-known 1983 sketch “James Brown’s Celebrity Hot Tub Party.”More celebrated than even that moment though, was the debut of Brown’s new 1985 song "Living in America," one of the biggest hits of his career, which was featured in Apollo Creed’s entrance in Rocky IV and spawned generations of imitations in the TV and movie world.

Sadly, Brown lost a bit of his musical momentum when his drug abuse became widely known (try Googling ‘James Brown high in interview’). His spiral culminated in what is the opening scene of Get On Up: a car chase. Brown’s 1988 arrest began with a car chase that ended with police shooting Brown’s tires out. While this moment marked a sunset on his creative powers, in the movie it serves as a jumping off point in exploring a man who earlier in life claimed a strict no drug policy with his employees.

In a review of the new film, Variety writes: “But perhaps it’s fitting that a movie on a subject as polymorphous as Brown never quite settles on a style or a tone.” The movie’s broken up timeline underlines the highs and lows, the conflict, within James Brown. Boseman sets out to portray each shift in Brown’s life with equal intensity. Most importantly, Boseman and the rest of the crew, including executive music producer Mick Jagger, smartly utilize Brown’s true legacy: his music. The film uses more than two-dozen of his songs, and Boseman’s performances in each one capture the intensity and the incredible life force that flowed through Brown, always in danger of exploding. James Brown is, without question, one of the most important musical figures in American history, and his imprint on the musicians who came after him is undeniable. According to the New York Times, “Brown was a dominant force in the soul ’60s, created funk, inspired disco and laid hip-hop’s foundation with his beats.” Get On Up rightfully puts Brown’s craftsmanship, and the musical performances that inspired generations, front and center.

TAGSGet On Up Universal Pictures