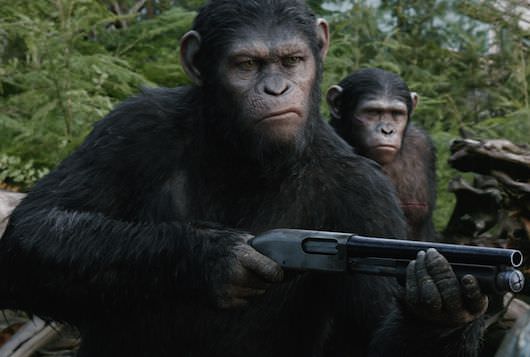 The hype for Dawn of the Planet of the Apes is unavoidable. Rave reviews are already flooding the internet and much has been made about the cutting-edge motion capture technology that renders the apes shockingly realistic, but the parallels of violence and struggles for peace have also captured viewers’ attentions. The Apes movies have always served as allegories, influenced by the political, social, economic and environmental issues of their times, as did the inspiration for the franchise: the Pierre Boulle's novel. To develop a deeper understanding of the franchise, here is a little historical context for the thematic issues in the novel and the films (and television series) that it spawned.

Boulle's novel was published in France in 1963 during a time when French society was undergoing an array of changes and social tumult. The sustained anxiety of the Cold War era was especially vivid in France, where the country was plunged into escalating violence as Algerians pushed for independence from French rule. French settlers protested and chaos ensued in North Africa, while President Charles de Gaulle set out to make France a nuclear power. Boulle wasn't merely using the high drama of the time to fuel his writing—he was actively involve din it. He served as a secret agent with the Free French in Singapore, where he was captured and subjected to two years of forced labor. As many imprisoned writers before him, Boulle used his time served as inspiration—it was the basis for his other famous book, “The Bridge on the River Kwai.”

In “Planet of the Apes,” readers follow human Ulysse’s journey through space to a future where sophisticated apes rule and humans, thought to be dumb, are used in lab experiments. Ulysse is able to eventually free himself, and learns that human civilization collapsed when enslaved apes rose up against their human masters. Ulysse and his (human) female companion eventually flee and return to Earth, only to find that their home planet is now ruled by apes. The inequality, colonialism and imprisonment Boulle saw and experience in his life charged his uncanny novel with a vitality that would spawn a franchise covering some fifty years.

The American movie franchise began with the original Planet of the Apes in 1968, a year of immense turmoil and change. You had Nixon in office, growing opposition to the Vietnam War, the Civil Rights movement (which would be rocked, two months after the film's release, by the assassination of Martin Luther King Jr.) and environmentalists agitating to protect the planet. The original film's themes of government corruption, environmental degradation, and species-based conflict were all drawn from the schisms happening throughout the country.

Planet of the Apes greatly pushed the cinematic envelope, utilizing makeup and prosthetics, sci-fi plots, and compositional techniques, helping it to win a variety of accolades including an honorary Academy Award for outstanding make-up achievement and Oscar nominations for Best Costume Design and Best Original Score for a Motion Picture (not a Musical). Far from a sci-fi romp, the filmmakers and actors alike took their adaptation as seriously as Boulle did his novel. During filming, the actors would self-segregate off-camera into different primate species and humans depending on their character. The National Film Registry also recognized the film in 2001 and selected it for preservation. And then there's that iconic ending. There are few cinematic finales as deathless as Charlton Heston, playing our hero George Taylor, coming upon the ruins of the Statue of Liberty and shouting, “You Maniacs! You blew it up! Ah, damn you! God damn you all to hell!”  The line has lived on in pop culture, immortalized again and again in shows like The Simpsons, Family Guy and The Big Bang Theory.

Hoping to capitalize on the popularity of the Apes franchise, CBS ordered a fourteen episode show that would build on the world and, hopefully, becoming a ratings juggernaut. Unfortunately, the show bombed and was soon cancelled. While most of the episodes remained fluffy, focusing on two astronauts who crash-landed on an ape-ruled planet and the chimp sidekick they pick up along the way, one episode was so edgy that CBS decided not to air it. This risqué episode examines the creation of poisonous gas, and the morality of using such a weapon of mass destruction. Set to air during the height of the Watergate Scandal, the Vietnam War protests and the Agent Orange controversy, the network shelved it. The episode was, however, eventually aired during reruns years later.

Return to the Planet of the Apes Animated TV Series, 13 Episodes (1975)

The cartoon version of the Apes world was not particularly lauded by viewers or critics, either, hence its quick cancellation. The show was the last gasp of the Apes franchise for a good number of years.

The Tim Burton reboot, such a great idea in theory (Tim Burton! Apes!) was a surprise critical flop while still earning some decent BO; in fact, many advise first time Apes watchers to avoid Burton’s film altogether. Mark Wahlberg, Helena Bonham Carter, Tim Roth and Paul Giamatti constitute a strong cast, but the film muted their gifts, as well as Burton's vitality and originality as a filmmaker, mostly due to a weak script.

The studio went through a number of screenwriters before settling on William Broyles, Jr. and even his drafts were rewritten, resulting in a muddled screenplay. The film was intended to be more in keeping with the novel, but instead left viewers perplexed. Burton focused his attentions on the actors’ portrayals of the primates and even made actors attend “ape school” to perfect their simian movements, not unlike the work Andy Serkis and the talented cast of ape actors put in for the two most recent films, but the story didn't cohere.

This newest chapter in the Apes franchise continues to push boundaries, though it no longer relies on makeup to draw the audience into the simian world. These two films focus on the perspective of the apes, with chimp Caesar (played by Andy Serkis) as your undeniable star. The ape actors took off the prosthetics and began donning technologically advanced motion-capture suits to portray their primate characters. In Dawn Of the Planet of the Apes, released today, director Matt Reeves took filming to the rainforests outside Vancouver to make filming extra challenging (and the scenes more realistic).

Dawn reflects our current political climate, touching on issues like gun control and paradoxical peace through violence. Two of the few words Caesar roars in the beginning of the film are, “No guns!” The movie is fraught with mistrust as apes and humans struggle to ascertain who is a threat and who can be trusted. The viewers themselves are unsure of the answer to this question as both factions warrant sympathy. Each group is rendered complexly, with the power struggles coming between characters who truly believe what they are doing to be just. The actions that each side feels must be taken to protect themselves, sometimes preemptively, resonate in a world in which the seemingly oxymoronic term “preemptive war” became such a crucial part of the lexicon in the first decade of this century. The film reminds us that fear can make followers of us all, and the consequences that come from being blinded by prejudice.

Since Boulle offered the source material with his novel, through the five original films, the television series (both live action and animated), to the three films of this century, the world of human-ape conflict has now spanned roughly fifty years. Many of the iterations have managed to capture topical issues facing society, with varying degrees of subtlety and grace. Whether your allegiances lie with the apes or the humans (or maybe just Maurice the orangutan in the last two films, who is impossible not to love), the Apes series has made for compelling viewing, with this latest film giving you much to mull, long after the 3D glasses come off.