There’s not a scratch, scrape, slash or bite mark he can’t create. Broken bones and severed heads aren’t a problem. Welts, warts, rashes and burns are perfectly doable. Whether you need prosthetics for a superhero, war hero, or son or daughter of Westeros, Conor O’Sullivan is your man. O’Sullivan doesn’t only work in the realm of gore—he’s also created one of the most famous noses in film history, turning Nicole Kidman’s perfect sniffer into Virginia Woolf’s more pronounced proboscis for The Hours, and created the prosthetics that the late, great Heath Ledger used to help him embody The Joker. It was O'Sullivan who crafted The Joker's identifying facial scars, the "smile" that he could never wipe off his face.

When O’Sullivan got the call to work on Hercules, which premieres Friday, July 25, one of his biggest challenges was designing the Bessi army, a tribe of brutal, green-skinned warriors who Hercules and his allies have to face. The Bessi battle was one of the biggest action set pieces in the film, requiring hundreds of extras, weeks of training, and 224 VFX shots from Prime Focus World. Yet before any of that could happen, O’Sullivan and his team had to create the army's wild, nasty look.

“We went through the whole process with Brett [Ratner], quite a few tests, designs, drawings, all to get the characters absolutely right. He wanted their leader to be a giant, so I got in touch with Ian Whyte, and we went from there.” Ian Whyte is the 7’1” actor who has memorably played behemoth baddies before, from the blue-skinned Last Engineer in Prometheus to the Mountain, a.k.a Gregor Clegane, in Game of Thrones.

“Logistically it was a big deal, they’re all painted green and covered in tattoos, and there’s 150 of them,” O’Sullivan says. He knew that meant it would take several hours and hundreds of thousands of dollars to get them ready, so he had to find a way that would be logistically, financially and aesthetically practical.

The Bessi soldier began with a rough sketch from Weta Digital that, as far as O’Sullivan could work out, wasn’t based on any specific mythology. “There was one loose sketch that showed these blue-green guys covered in tattoos that almost looked like war paint, and that was something that Brett liked,” O’Sullivan says. “We were worried about the time to get the soldiers painted and tattooed. Like putting prosthetics on, it can be very time consuming. So initially, we were working from the design, trying various options to make it work, thinking of maybe using scars instead of tattoos, for example, because we hadn’t really worked out the manufacturing of the tattoo materials.” O'Sullivan studied primitive scarification, which he initially liked. After initial tests, however, Ratner preferred the tattoo look, so O'Sullivan began sketching designs.

O'Sullivan began his tattoo research by looking at Greek painting and pottery. He wanted the design to mimic the way the Greeks themselves drew and painted. The Bessi are ruthless, animalistic killers, however, so their tattoos, it was decided, would combine the classical Greek illustrative method with a serpentine look. One version of the Bessi that O'Sullivan worked on actually had scales, but it didn’t look right, and, O'Sullivan said, it was out of keeping for period. “In the end we went to the viper family, and this particular snake, which we call Adders, but in America you call diamondbacks. So I used nature and Greek pottery to get the right look.” 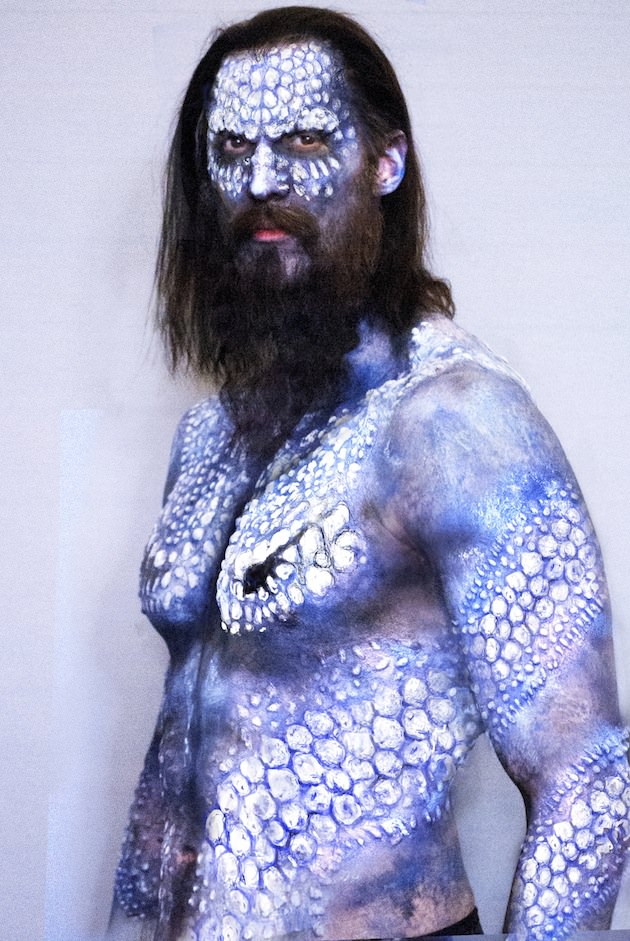 “Drawing from the adder, or diamondbacks, they literally have triangles on their back, it looks like a bolt of lightning, they’ve got this very distinctly diamond shaped pattern in the color of the scales, if you look at the snake we designed, that’s exactly what we used. It took a lot of time to get it to look right, because it wrapped around their arms. It was a lot of work, I must say, a lot of weekends and evenings.” 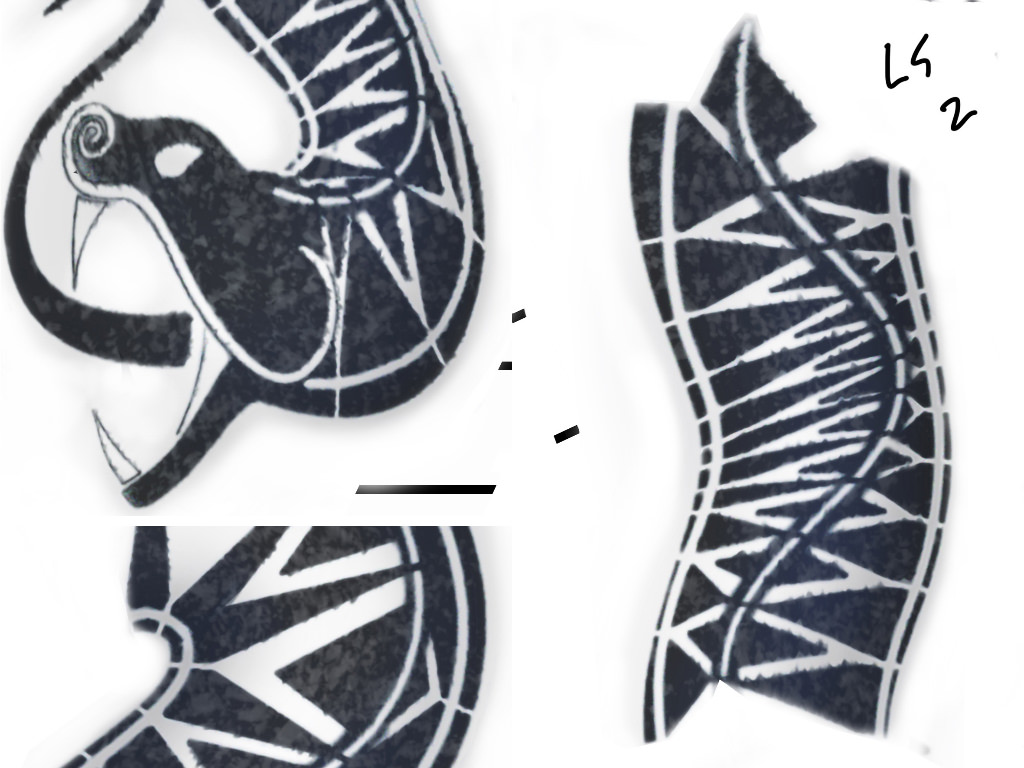 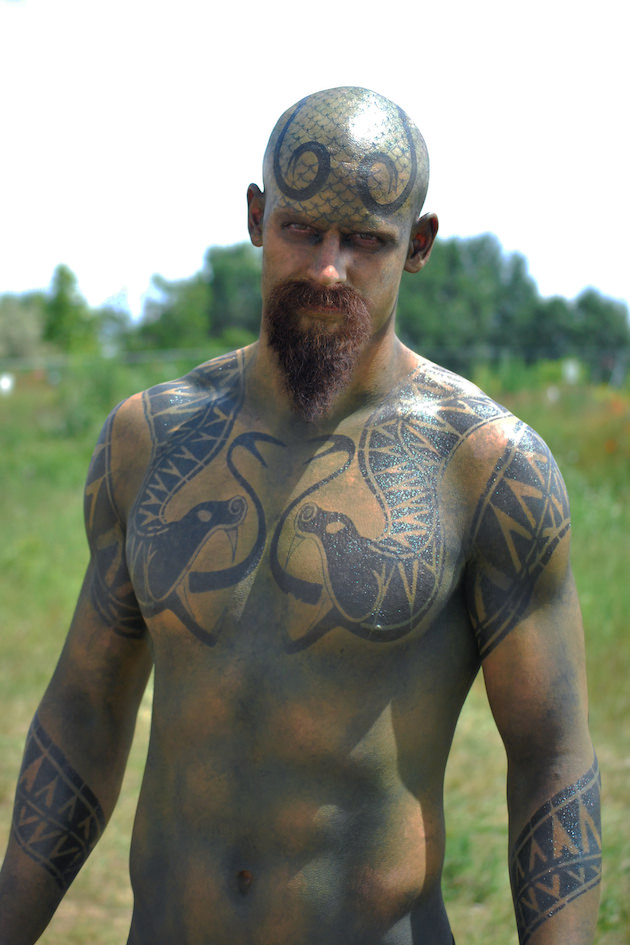 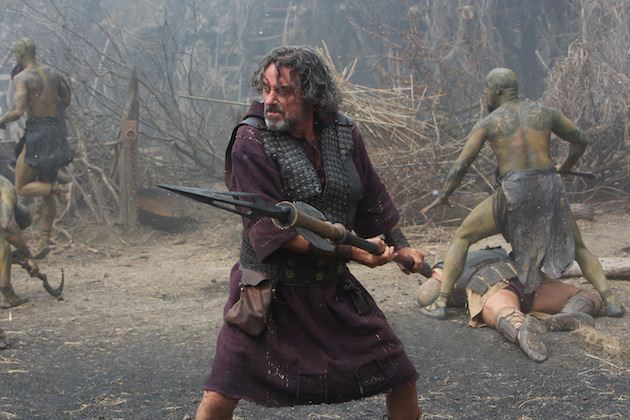 The actual logistics of getting the Bessi ready for action was a major hurdle. “Initially it was taking two hours to get one person ready, so if you work that out for the whole cast, it would have required a crew of one hundred people to get them all ready in the morning." This, of course, wasn't possible, so O’Sullivan and his team found an ingenious way of painting and tattooing more than a hundred soldiers quickly and with great detail—they broke down the army into three groups; heroes (who would be in the foreground), mid-ground, and background Bessi—and each group received a different level of attention and detail based upon how identifiable their group would be on screen.

For the background Bessi, they created what amounted to tattoo suits. “They wore a stocking material made of a fine spandex flesh covered in lyrca meshing. We found this company that does sublimation printing, which is basically a heat transfer, so you print a design onto paper and then transfer it, by heat, from the paper onto the material. In this case it transfers the actual dye rather than a plastic material. We printed 22,000 sheets of paper for tattoos for the film. So we had forty of the background actors dressed like that." This allowed them to be prepared for battle without the same level of exacting detail that would be required for the mid-ground and heroes, the latter of whom, lead by Ian Whyte as the giant Bessi leader, would be up front and center. For the hero Bessi like Whyte, O’Sullivan had stents of the tattoo design created, which would then be transferred directly onto the 20 or so heroes that you see up close and personal in the film. By breaking down the process into groups, they were able to have the entire army painted, tattooed and ready for battle in a little under five hours, beginning at 5:30 am and finishing at around 9.

Every detail was thought of, including the components of the paint itself, which was infused with all day sunblock and insect repellent to keep the actors from being burned and bitten. The paint was also glue based, so that the tattoo transfers would stick to it and stay on.  “We sprayed them with the green paint, which was then textured with sponges, followed by transferring the tattoos onto them. It was quite a factory, we actually had to design the tent, which we called a sausage factory— they’d come in one end clean and come out the other end as fully formed Bessi warriors.” 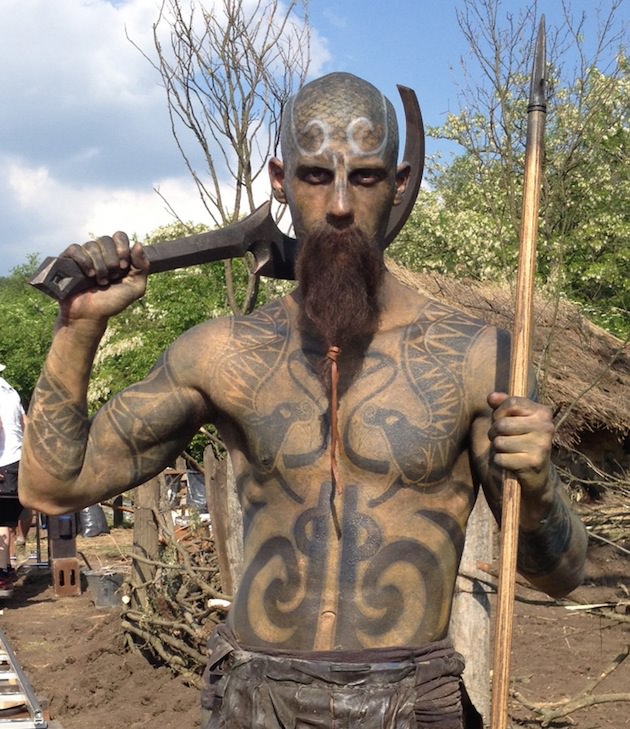 O'Sullivan and his team had a ton of work to do on the wound front, considering the film contains several massive battles. "There were lots of dummies, dead bodies, hydra heads, scars, wounds, bites, scratches, so there was a ton on design work for various characters, one of whom gets burned. So that meant we needed lots of prosthetics for makeup."

As the star of the film, Dwayne Johnson's Hercules is also a major glutton for punishment. This meant O'Sullivan and his crew had a lot of work to do to keep the hero in wounds and battle scars. "Very early on he gets a would to the shoulder that gets stitched up, so we made a special wound that ages from stitching to scabbing and into a scar." 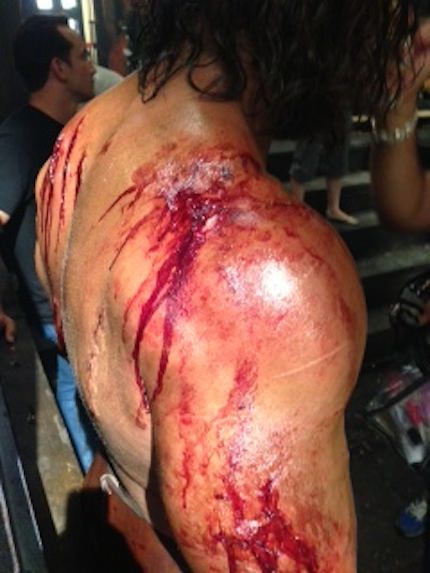 The wounds O'Sullivan creates tend to be flat molds. "You put the wound on a flat surface, then you being the process of putting silicon into the mold, getting a flat edge, and curing and setting it. Then you transfer and glue the wound onto the actor, with the goal of making them impregnable to the day’s labors." Sometimes those wounds are bite marks, or, in the case of Hercules run-in with the Nemean lion and the three-headed warg, they're huge scratches. 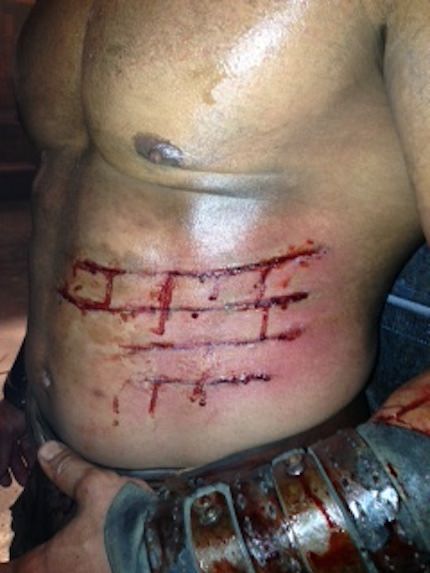 Askel Hennie's character, Tydeus, one of Hercules most ferocious allies, suffers (among many wounds) a severely broken nose. "For Tydeu's broken nose, we did a cast of the actor, sculpted the design, molded it, then that broken nose mold, which is an eighth of an inch think, and we apply it fresh every day." 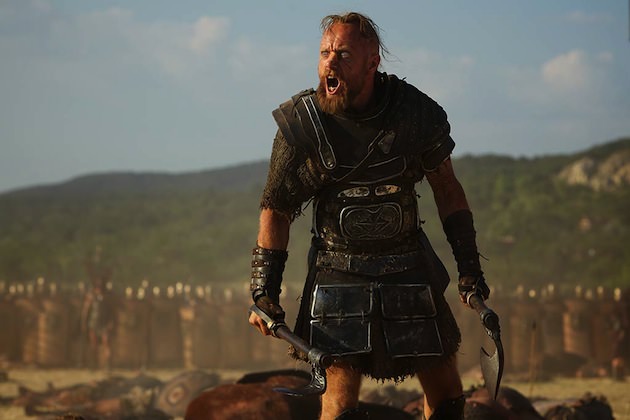 For the three-headed serpent Hydra that Hercules battles, O'Sullivan and his team made what he called "good quality heads."  "The heads are made of silicon, and we use a lot of silicon. Latex foam used to be the traditional material, but silicon’s quality is much better, it's translucent, so the finished product looks and moves like skin. It's actually almost indistinguishable from skin."

O'Sullivan recalled how on the set of Ridley Scott's Prometheus he had the luxury of taking several hours to lavish on The Last Engineer, the blue-hued giant alien so crucial to the plot of the film (and the entire Alien series). "You can make the most beautiful things with that kind of time…it took us hours to get The Last Engineer ready because he only appeared once. He had sixty pounds of silicon on him. If we took 3 hours for every member of the Bessi army, that’s 450 man hours to get them ready. We were two people to each warrior, so that’s a crew of 300 people—it becomes impossibly expensive. Part of the job is logisticvs, and Hercules was a game of logistics, as well as technical understanding. Eventually we got it all down."