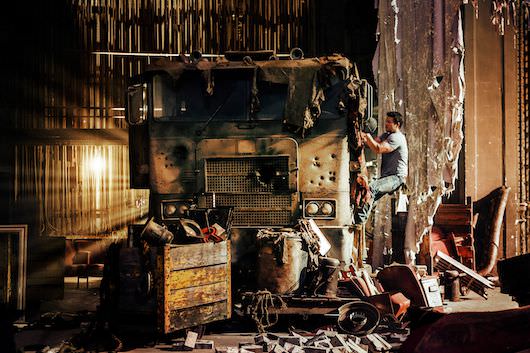 How Transformers Construction Coordinator Jonas Kirk Managed a Crew of 200

The role of the construction coordinator is a massive one. For Transformers 4: Age of Extinction, Jonas Kirk was the man responsible for the building and manufacturing of the massive sets the film required, which meant bringing in all the equipment, building and moving massive structures, managing the production budget and keeping his 200-man crew on schedule and on budget.

This was a tall order considering the production took place in Texas, Illinois, Utah and Washington. One of the more intricate construction projects the film required of Kirk and his team was the interior of the alien ship you see at 1:05 in the below clip:

“We had to build these parts that could be moved around on dollies and reconfigured,” Kirk says. They created the illusion of a cohesive spaceship that was actually a series of moveable walls. “These walls were thirty feet tall, twenty feet long and made up of ten-thousand parts, all on casters that we could move and recombine to make it look like different parts of the ship,” he says. “That was a scheduling dance.”

The alien robot action in Age of Extinction moves from America to China. What this meant for the construction team is replicating a section of Hong Kong in a parking lot in Detroit. Kirk and his crew created several city blocks worth of Hong Kong which required scaffolding up to five stories high and bamboo shipped in from Hong Kong. Creating the site took roughly 14 weeks, and they designed much of what they built to be destroyed. For some of the smaller pieces they were able to create replicas in case the explosion didn’t go to plan, but they couldn’t do this for every piece, which increased the pressure on the production to get their shots right the first time.

“Depending on the size of what the piece is, they’ll ask for a few replicas,” Kirk says. “For the Hong Kong set we had a building that was 42-feet tall, and they decided they wanted to drop the building,” Kirk says, meaning they wanted it destroyed. “You’re not making two of those.” The construction crew worked closely with the special effects team to come up with the best plan of attack so the building is destroyed on cue, in one take.

These aren’t plaster and foam buildings, mind you, but structures that must be built to hold real people and that must meet all the necessary safety codes. “They’re made with steel, with regular footings, all of it engineered to stand up to wind load and support a crew,” Kirk says. The plaster only comes in at the end, when the crew adorns the exterior of the buildings with various materials, layering it to the production designer’s specifications to create structures that look weathered, real, and in many cases gashed by giant alien robots.

Sometimes the construction crew is building onto existing structures rather than creating ones from whole cloth. In fact, in some cases, a film production will win a location by their ability to improve, or add onto, a building, house or apartment. “Sometimes you’ll leave the modifications in place after the shoot,” Kirk says. “Sometimes that’s part of the deal upfront.” So when a film's location scouts find that perfect farmhouse or apartment, save for a few necessary additions, the owner might win herself some free renovations for use of her residence

For the farmhouse in the clip above, owned by Mark Wahlberg’s character, Cade Yeager, Kirk added a side porch onto the residence they filmed at, as well as painting and building lightweight walls to make other parts of the farm look of a piece with their main location. A few of the buildings on the property looked too modern, so Kirk’s crew aged the exteriors by adding on materials. For the interior of the barn where Yeager discovers the truck he’s bought is actually Optimus Prime, they found a barn some forty minutes from where they shot the exteriors that fit their needs better. There they had to do some landscaping, cutting and trimming trees, cutting grass, and, at times, even adding trees so that the continuity between the exterior shots in the other location and what you could see out of the window from the interior location matched.

Film productions live and die on the strength of their channels of communication. For a film of this scale, with hundreds of people scattered all over the world working on a single vision, you need to build a communication structure every bit as strong and resilient as those you build for the set. Kirk’s team alone was comprised of seven different departments, each with their own head and additional foremen, all who report to him and keep him apprised of their process. Carpenters, plasterers, painters, sculptors, mold makers, laborers and greensmen all working in synchronicity to meet the demands of all the other departments, from art to set design to SFX.

No production plan ever goes unchanged. When you’re heading up a 200-person department, you have to be able to rejigger the plan and rethink the process, Kirk says. And that’s why communication is the most crucial aspect of his job. "It goes back to the lines of communication we build—with the producers, with the director, with the designers, with everyone. There are a lot of busy days, and a lot of long days, but Michael surrounds himself with quality people so it makes it all doable. Everyone’s approachable, even on the hard days.”