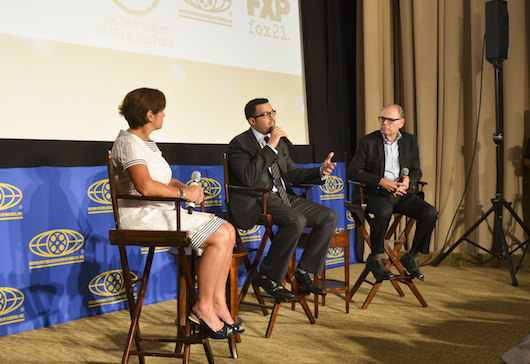 FX's new show Tyrant is unlike anything currently on television. Showcasing Arab characters and cultures, set in the Middle East, the 10-episode first season is a bold step towards showing American audiences people and situations rarely depicted. While Netflix's Orange is the New Black is deservedly lauded for filling the frame with three dimensional female characters who are black, brown, gay and transgendered, Tyrant will put faces on our screen who have too often been portrayed as villains or marginal characters at best.

The show focuses on the story of Bassam Al Fayeed (Adam Rayner), the son of a dictator in the fictional country of Baladi, who has been living in Los Angeles in contented, self-selected exile with his American wife, Molly (Jennifer Finnigan) and their two teenage children. Bassam, who goes by Barry now, reluctantly travels back to Baladi to attend the wedding of his nephew, where he's reunited with his family for the first time in 20-years.

The pilot was directed by David Yates (Harry Potter & the Deathly Hallows, Parts 1&2) and written by Gideon Raff (the creator of the Israeli inspiration for Homeland), plunging us into Barry's increasingly unstable predicament once he returns home. Barry's father, and his home country, exist in a post Arab-spring world, and soon enough Barry's life is turned completely upside down as his homeland and his family's troubles become his own. The production itself is not immune from the realities of world it's set in—it recently announced a move to film in Turkey while tensions mount in the Gaza Strip.

Cynthia Schneider, co-director of Muslims on Screen and Television Initiative (MOST), sat down with Glenn Gordon Caron, executive producer and writer on FX's new show Tyrant, and Ramy Yaacoub, the deputy director of the Tahrir Institute for Middle East Policy, to discuss the show, the implications of trying to depict the complex and often misunderstood world of Arab culture for an American audience, and how Hollywood might better depict the Arab world.