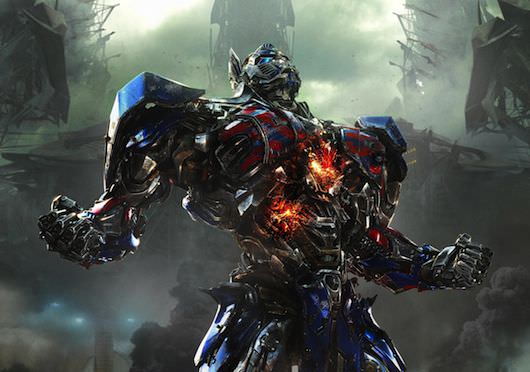 When your film centers around alien robot colossi laying waste to each other and their surroundings, it's pretty crucial that the wreckage look real. Two of the job titles responsible for making Michael Bay's latest carnival of destruction, Transformers 4: Age of Extinction, look realistic (and, in its way, beautiful) are the creature supervisor and the FX technical director, so we spoke to both, Michael Balog and Sheldon Serrao.

“My group deals with anything geometry based,” Balog says, the creature supervisor. “So that’s the Transformers, large pieces of ground, anything that’s a large piece of math. The particle guys basically add particulate dust, concrete dust impacts, pyro effects, fire, water, sparks, clouds. So they add the small particulate effects that are based off the large pieces of destruction. Our stuff drives what their stuff does, so if the piece of concrete cracks in half, my job is to crack that concrete in half, they’re in charge of all the debris and dust and tiny pebbles.“

In essence, Balog and his team knocks stuff down, and Serrao and his team covers it in smoke, dust, fire and sparks to make it look like it actually happened in a real environment.

“We use effects to tell a story,” says Serrao, FX technical director. “You have to tell a story, along with the animation, about what is going on in the shot.” The way Serrao describe his team's role is that they give the damage being done by, and to, our Transformers, the proper weight. They do this by giving every impact in the film the necessary particulate response—when Optimus Prime is blasted by an enemy, all the bits of pulverized metal, the sparks and the smoke aren't just cool visuals, they're elements that are needed to tell that moment in the story. For a film franchise famous for it’s destructive impulse, the particle effects team is very busy, indeed. At nine seconds into the below clip, look at what happens when Prime is shot—all of that flying particulate wreckage was put there, bit by bit, byte by byte, by Serrao's team.

Before Serrao and his team go to work, they need to speak with dozens of individuals from various departments within Industrial Light & Magic, from San Francisco to Singapore and Canada, as well as director Michael Bay, to make sure everyone is on the same page. “We all have to work together to establish a story in these effects, in how these elements are moving.”

Balog said that his work was cut out for him on this film. One of the new additions to the Transformers universe are the dinobots, which are exactly what their name suggests. The dinbots leader is undoubtedly Grimlock, the robot T-Rex that dwarfs all other Transformers in size and destructive power. When Grimlock is running through the forest, Balog needs to make sure the grass moves the way it should, the trees snap as they would, and the large scale damage looks right. “The dinobots are so massive in this film that when they run down the street, they tend to crack and destroy the ground as they go. We’re not used to dealing with characters this size, they’re clumsy and they’re not aware of their environments,” he says. They’re roughly 40-feet tall and 60-feet long, and every single thing they come into contact with pretty much gets destroyed, and considering they’re running around in downtown Hong Kong, that’s a lot of destruction for Balog and Serrao to handle. 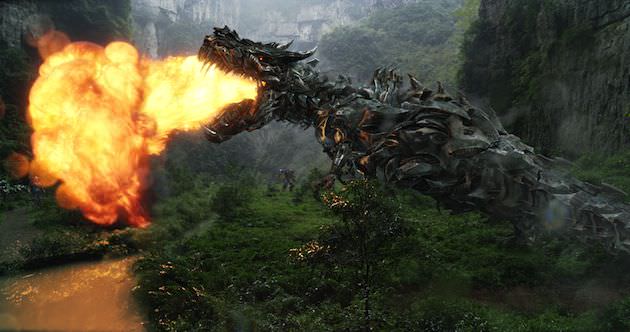 When Serrao and his team add the obliterated bits that the dinobots and the rest of the Transformers are constantly scattering into the atmosphere, one of the biggest challenges is to make it all move in appropriate way. “You want it be fluid, and move in a mathematical way, but Michael [Bay] wants there to be artistic movement, too,” Serrao says. “So that’s where, as an effects person, you have to move between two worlds; the physically accurate and the artistically driven.”

Industrial Light & Might has lots of proprietary software they use to create these effects. Two such programs are Zeno, the particle effects package that Serrao uses, and Phys-Bam, their geometry based physics engine that creates a lot of Balog's simulations.

“Where the process starts for us is, for the most part, with the animation,” Balog says. “The animation supervisor and Michael will block out the scenes, and the animators are great about giving us cues on what they’re expecting us to deliver in the final product, so if Grimlock is clipping a building, they’ll put a cue in their animation that they’re expecting an explosive impact.”

“Even in live action, we kind of look at what live action people do,” Serrao says, referring to how he builds the particulate response to Grimlock clipping a building or an explosion taking place. “My inspiration is looking at elements of real explosions, all the dust and debris flying around, and use it. We see how they set up the explosion, from point zero to the end, how all those explosive elements happen, and we use that. I create the particle effects in a very similar way in the 3D world. A lot of it is art directed,” he says. “An animator gives weight to a Transformer, and we give weight to a dust simulation.” 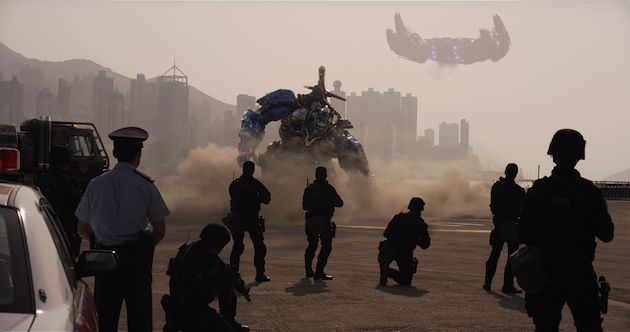 Because a lot of the effects that Balog’s team are creating can't be drawn from the practical shots that Bay and his team capture (you can’t really shoot a ferry falling from the sky in real life, not even on this budget), they do what so many of us do at our own jobs—they search for stuff on YouTube and Google.

“We’re looking for ground impacts, cars being crushed, we go to demolition sites so we can reference buildings imploding or being smashed by wrecking balls,” Balog says. “A wrecking ball gives you a pretty good idea of what it would look like if one of these Transformers smashed a building.” In order to make a building collapsing from being punched by a giant robot look realistic, Balog’s team adds actual construction elements to his digital creations, building them, to an extent, so he can tear them down. That includes rebar, concrete floors, pylons, glass and metal. “We layer all those effects on top of each other,” he says, and then he destroys them.

“For me, the most difficult thing is anytime you’re dealing with something you see in every day world, like skyscrapers, to trick the audience with that level of detail inside the computer is so difficult,” Balog says. “You have to build that stuff by hand, and to make it bend as it does in the real world is extremely difficult. We’re not architects, we don’t construct buildings for a living, so to go in and make them behave the way they do in the real world inside of a computer is so difficult.”

What comes up when the buildings come down is not easy to create, either. Dust and debris are difficult to mimic, but Serrao says there's one particular particulate that really tests him.

“Sparks are the most difficult element we faced,” Serrao says, describing one of the marquee particle effects in a film populated by massive metal beings clashing and smashing against one another. “Sparks are the lightest element. Unlike an explosion, which is heavy and fills the frame, the spark is like rain, it’s very artistic. You’ll see there’s a lot of sparks. Michael Bay loves sparks. They help tie in what’s going on in the shot between all the dust and debris. Sparks are like the glue in the shots. It also helps to light the environment, it’s just a very important element in a Michael Bay movie." 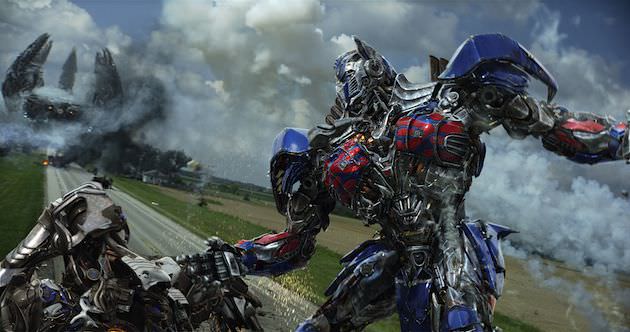 As closely as Balog and Serrao study how the elements they’re tasked with creating move in the real world, they’re still artists and this is still a movie, and Bay wants them to make things as cinematic as possible without sacrificing plausibility. “We have the ability to tweak gravity,” Balog says. “Michael might want debris to fly towards the camera, or hit a certain mark at a certain time, but with real world physics that would be impossible, so we’ll cheat and add some friction or gravity to push and pull certain pieces of geometry one way or another.” Balog says that when the simulation he creates is 95% of what Bay is looking for, he’ll bend the rules of physics to get that last 5%.

All of this work is so minutely detailed that a single second of screen time can take days, even weeks to create. Balog says that a shot of Grimlock running down the street and cracking it open with every step would take roughly two to four days to get right. As for the shot when a gigantic ferry boat falls out of the sky and crashes in Hong Kong, that one shot took up to five weeks…for a sequence that lasts around two seconds in the film. “This ferry boat hits the ground, cracks in half, rolls towards the camera crushing cars—you’re throwing the whole kitchen sink at that, the level of detail is so high,” Balog says. “It’s one of the most complex shots we’ve ever worked on at ILM."

Serrao said that for shot of a Transformer punching a piece of concrete, and the requisite dust and concrete particles that need to be blown into the air, it takes around 30 passes from his team. This is also for a shot that lasts a second or two. "On any given shot you may have sixty artists all contributing to it," he says.

“I’m the destruction supervisor,” Balog says, happily. “I break stuff for a living, and this is the perfect film to do it on. It’s Michael's forte.”