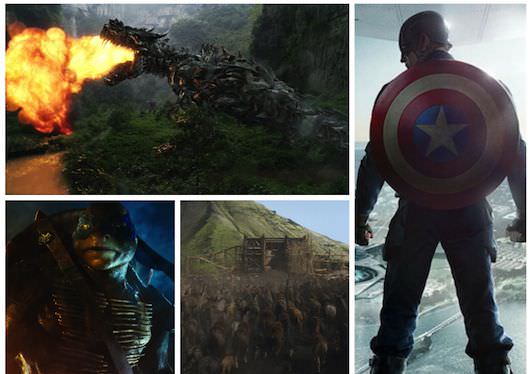 We interviewed three different Industrial Light & Magic employees last week to find out how they helped create the visual splendor that is Transformers 4: Age of Extinction. We got so much out of the interviews we couldn’t fit it all in to last week's interviews, so we've compiled a lot of the hard facts on the magnitude of their computing powers for today's story, which have grown each year to keep up with the increasingly sophisticated computer-generated demands of directors like Michael Bay.

It's not surprising that ILM has created bespoke software to meet the demands of filmmakers whose visions are, increasingly, becoming less and less restrained by what can be created for the screen. This is how ILM has been able to conjure the worlds of Noah, Captain America: The Winter Soldier, the aforementioned Age of Extinction, and the upcoming Teenage Mutant Ninja Turtles, Unbroken, Avengers: Age of Ultron, Jurassic World and Star Wars: Episode VII.

For a film like Transformers, the ILM team uses many terabytes of data. How big is a terabyte? It's 1,000 gigabytes. To put that in perspective, if you have the most robust iPhone available, it's 64 gigs. A DVD is 4.7 gigs. The average computer has one, yes, one terabyte. ILM has thousands of terabytes for their range of films, stored in massive racks that are being accessed at the same time from their offices in San Francisco, Vancouver, London and Singapore. As FX technical director Sheldon Serrao says, "It takes a village to create these shots."

Serrao explained that what all major effects studio face is a disk space problem, basically, how much storage space do you have versus how much computing power you have. “We thought Pacific Rim was challenging, but Transformers 4 was challenging for storage and computing power,” he told us. “A lot of shots had to be delivered in a short period of time. We had 15,000 processing units that were working on visual effects to double our rendering power." That’s a massive amount of computing power.

"We're always asked to push the envelope on what we can render," creature supervisor Michael Balog says. "The level of detail in the Transformers themselves is probably twice as high as the last film. If you take a shot with the Transformers and add the level of detail my department adds, from a render and memory standpoint, we wouldn't have been able to load and render the amount of geometry we did for this film on the last one. Some shots have four to five dinbots, four to five Transformers, all running down the street smashing things—it's pretty amazing."

One of the new visual elements ILM was able to add to Age of Extinction is the hypno-transformation. "We've been able to slow down the transforming," Balog says. "Before you couldn't see all the details because everything was happening so fast. Now we have the hypno-transformation, which is not a traditional transformation where parts are rotating and flipping out, but rather a more organic, searching, tendril-type of effect that some of these new robots do."

Hundreds of Cooks in the Kitchen

"There are hundreds of artists working around the world, all working on the same shot, all having to be completely tied in on what Michael Bay shot on set," Serrao says.  The practical effects shot on set have to be threaded together with the production design, the visual effects and the special effects. The entire filmmaking team needs to figure out what sets will be built, what will be created with CGI, what explosions will be pulled off for real, what will be done with visual effects, how much will be improvised, how much will be added, and all of this must be figured out and completed in a very small window of time. "It’s one huge jigsaw puzzle that, at the end of the day, has to tell a singular story," Serrao says. So how does ILM manage all of this? Software, of course.

Their forecasting production software is called ILM ProdCast. For the backend, they created the ObaQ, which recently won a sci-tech award. Both of these systems are, Serrao says, intelligent, and they can be modulated on the fly to account for the exigencies that arrive during every movie production. "We can cut in and flip the priority of the schedule, run a shot ahead of time or bump artists up in the queue," Serrao says. "All of this is in flux and always changing, there's always a Super Bowl commercial or a Comic-Con trailer that needs to be dealt with."

The ProdCast system is an internal tracking software package that keeps all the trains running smoothly and on time. "Over the past 39-years, ILM has developed software that helps track how shots will be developed," Serrao says. "It's like an air traffic controller, with this software tracking every asset, every element, every piece of every shot, pinpointing exactly where it is in the pipeline, where it's going and who gets it next." Serrao says that this allows every artist to look at all the given data for a specific shot and how much time they have to complete their piece of it. "We're our own Big Data. We analyze our own data to the nth degree to make sure we're running as efficiently as possible. It doesn't do us any good to have stuff done two months in advance if the next person in the line can't do anything with it for weeks or months." This proprietary software isn't used to track just one film, of course, but all of the films ILM is working on at any given time.

Many Formats, One Vision

Age of Extinction was especially hard due to the film's myriad formats. "This film had nine different formats," Serrao says. "IMAX, stereo IMAX 3D, digital, Red Cameras, GoPros, and we've got to make all of those things look the same. Just rendering IMAX is one thing, but rendering IMAX stereo is another. We're never asked to do what we did on the last film. One line in a script is six months of figuring out how to create something nobody's ever seen on a screen before."

ILM's artists fingerprints are invisible to the delighted moviegoer, but are clear as day to Serrao. "There's nothing that ends up on screen by chance," he says. "Everything was put there by an artist, everything was lit and composited, that includes the dust, the sparks, the smoke, the water, every single piece was created by an artist, every little pixel on screen was put there by somebody."