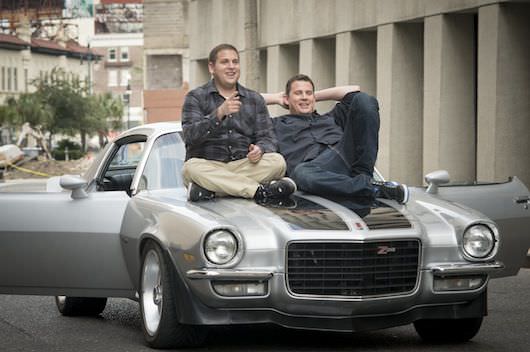 Sticking the Landing: 22 Jump Street‘s a Sequel Worth Seeing

21 Jump Street, directed by Phil Lord and Christopher Miller (the duo behind this year’s The LEGO Movie), came out in 2012 and was something of an unlikely smash hit. Unlikely in its odd couple lead pairing (comedy vet Jonah Hill and action-Adonis Channing Tatum), and unlikely in that there seemed to be little reason to reprise Stephen J. Cannell’s television series from the late 80s, remembered mostly as an early vehicle for Johnny Depp. But Michael Bacall’s script, deftly directed by Lord and Miller, coupled with Hill and Tatum’s eclectic, hilarious chemistry, created one of the surprise comedy juggernauts of 2012. A sequel was pretty much guaranteed at that point. The early reviews suggest that, once again, the dynamic foursome of Lord/Miller/Hill/Tatum (not to mention the writing team of Bacall, Oren Uzeil and Rodney Rothman) have stuck the landing and nailed their sequel.

Officers Schmidt (Hill) and Jenko (Tatum), having now made their way through high school (twice), where they were tasked to bust up a drug ring, are back, now being asked by their ball busting captain Dickson (Ice Cube) to go deep undercover at a local college where, wait for it, a drug ring is dishing out a toxic new pill that’s already killed one person (the pill is called WHYPHY—you get it). So it’s up to Schmidt and Jenko to navigate the delirious, debauched world of college to find the perps, but unlike 21, where it was neurotic, nebbishy Schmidt who fit in with the “cool kids,” while macho Jenko was an outcast in the newly PC world of high school, it’s the latter’s turn to be cool, and this is a major problem for their now well-established relationship.

Embrace the Unnecessariness of the Sequel

“Ladies, nobody cared about the Jump Street reboot,” says Deputy Chief Hardy (Nick Offerman), referring to the crime fighting operation that used to be run from 21 Jump Street, but now, as the title suggests, had to move across the street to 22 Jump Street thanks to "some Koreans" who bought their old HQ. Hardy is also, of course, referring to that first film. “But you got lucky. So now this department has invested a lot of money to make sure Jump Street keeps going.” It’s a majorly meta moment, one of many in which the filmmakers acknowledge, again and again, that while nobody needed a 22 Jump Street, they're going to make sure you know they know that, and then they're going to throw everything at you until you give up and laugh hysterically throughout the film. Practically every character makes some kind of comment about how it's "never as good the second time," and there are several "that's so needlessly expensive!" quips. The action in 22 is a step up, in both mayhem and absurdity, from 21, and it indeed looks a whole lot more expensive. On top of all this, the plot is more or less identical to the first film (school setting, drugs being sold), and yet even that doesn't derail this film. How's that possible? 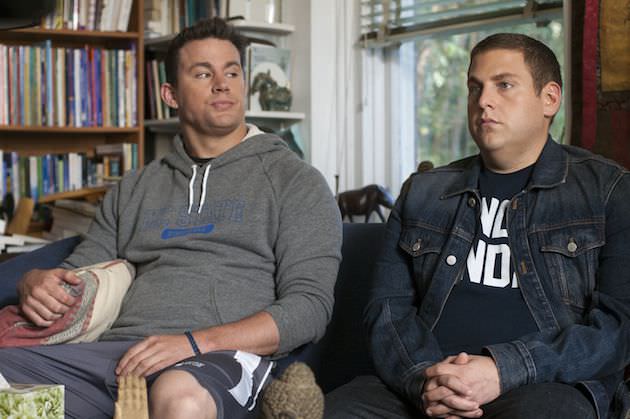 “The thing that struck us about movie sequels is, in a way, they’re like the second part of a relationship,” Lord said in the production notes. “In a relationship, you can try to recreate the past, but it’s never going to be the same; you’ve got to create new and different experiences that are just as great.”

Jenko and Schmidt met-cute in the original, two diametrically opposed opposites being forced to work together and, lo and behold, growing to care about, and compliment, each other in many crucial ways. They became partners, at work and, it would seem, in life.

The filmmakers were inspired by the idea of Schmidt and Jenko being each other’s “hometown honey,” only to go to college and have a whole new world opened up to them. Only their roles from 21 are flipped—now it's Jenko who is embraced and beloved and Schmidt who's left sullen and alone. Jenko even finds a new man-crush, Zook, the quarterback of the football, played by Wyatt Russell (Goldie Hawn and Kurt Russell's kid), who’s a touch more Jenko’s male friend ideal. Only he also could be the very drug kingpin they’re looking for, which throws his relationship with Schmidt, and their whole case, into turmoil.

Their partnership floundering, Jenko and Schmidt agree to start “investigating other people, sow our cop oats,” and while Jenko is living the college dream (he joins the popular fraternity Zeta, has multiple sex partners, is a football star), Schmidt finds himself in a living hell of obscurity and marginalization, that is, until he meets a very cute co-ed named Maya…

Populate the Film With Funny People

To make sure they still knew what they were talking about, Miller and Lord did some research on the UCLA campus. “It’s all the same today as it was when we were in college,” Miller said. “They rage and party and take terrible care of themselves.” Part of the appeal of any college movie is the idiots you fill the frame with, and for Lord and Miller that meant a murderer's row of funny people. 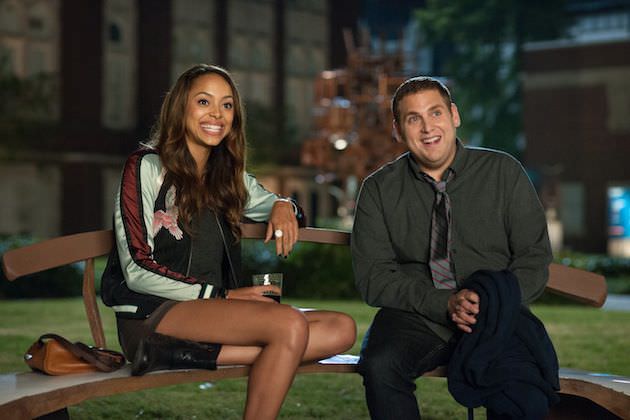 Amber Stevens plays Maya, the potentially dangerous but undeniably beautiful co-ed that Schmidt meets in what has to be the best slam poetry scene in film history (and a moment of pure lunacy lots and lots of people are comparing to Will Ferrell's flute solo in Anchorman). Stevens is part of an ensemble that threaten to steal every scene from Hill and Tatum, no easy feat.

One of the returning champs from the original is Ice Cube. This isn’t the first time the guy who wrote “F**k tha Police” has played a policeman, but Cube’s role as Captain Dickson is probably his funniest police character to date. The most enjoyable source of tension with Dickson comes from Schmidt’s belief that he and the captain are equals, and his desperate attempts to be cool with, and around, Dickson. “There’s no breaking the ice with Dickson,” Cube says.

Along with Cube, Stevens and the aforementioned Nick Offerman, a slew of 21 alums return to pepper the film with hilarious oddball moments, including Rob Riggle as the unfortunately maimed Mr. Walters. 22 also includes some new players, three of whom are rising comedic stars in their own right. They are Comedy Central alums Jillian Bell (she’s hysterical on both Workaholics and Idiotsitter) as Maya’s feral roommate Mercedes, and the Lucas Brothers, as Keith and Kenny Yang, who play two stoner twins who finish each other's sentences and steal every scene they're in.

In the end, however, 22 works so well for the same reason 21 was a surprise smash hit—these two lunatics.