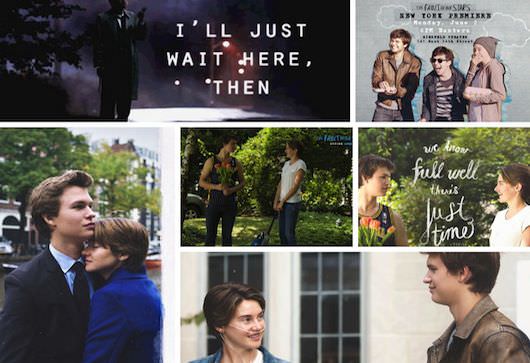 Amid mutants, massive monsters and a horned and winged Angelina Jolie, a much quieter but no less anticipated film has been on everybody’s radar well in advance of it’s June 6 release—The Fault in Our Stars. Based on John Green’s 2012 novel, TFIOS centers on the story of Hazel (Shailene Woodley) and Gus (Ansel Elgort), two witty, irreverent teenagers who meet, and fall in love, in a cancer support group.  So it’s about as far from X-Men, Maleficent and Godzilla as you can get, yet the excitement leading up to this Friday’s premiere is superhero-sized, thanks to the nearly 11 million copies of Green’s novel in print worldwide and a very savvy social media campaign that was launched early and updated often, engaging fans who have very strong feelings about Green's book.

When you're dealing with beloved source material you've got to go on an embrace and engage campaign. TFIOS filmmakers had a major asset in Green, who has long had a significant social media presence that includes Vlogbrothers, a YouTube site he shares with his brother Hank that has 2.1 million subscribers. He has been instrumental in spreading the word about the film's production to his legion of followers, and has been a part of that process from the beginning, a smart move by 20th Century Fox.

The marketing for the Harry Potter, Twilight and The Hunger Games films all worked to engage the army of fans who loved the source material. These films represented 14 books, teeming with characters and encompassing entire worlds. While they were and are beloved, you could argue there's more room for error adapting their sprawling mega-narratives than there is with a supremely personal, single volume story about young love in the midst of tragic circumstances. By keeping TFIOS fans intimately involved with the production process, and finding ways to make them a part of the build up to the premiere, the filmmakers and Fox have helped turned, at least for now, potentially skeptical and very protective fans of the book into eager and vociferous soon-to-be moviegoers. Cast appearances, Q&As and early sneak peaks have all helped build a ton of good will.

Start with the film's homepage, which resembles a mashup of a Pinterest board and an Instagram feed ( but is actually a Tumblr page), with an appealing blue background and a big old box on the lefthand side to tweet about what The Fault in Our Stars means to you. It includes an appealingly laid out display of Instagram photos and videos, clever gifs (many created by fans), and plenty of different ways fans can engage with the community of people surrounding the film, the filmmakers and cast themselves. TFIOS has slapped up more behind-the-scenes photos and footage on YouTube, Twitter, Instagram and Facebook in a given week than many films will offer in their entire online lifecycle.

Consider that their Twitter feed (@TheFaultMovie) has 416,000 followers with a hashtag (#tfios) that seems to circumnavigate the globe every nine seconds, and you begin to understand how a film with a very modest budget is tracking for a massive opening weekend. John Green has 2.48 million followers, Shailene Woodley has 649,000, and Ansel Algort has 561,000—all of them have been Tweeting updates, creating hashtags and keeping the buzz alive and well. Jason Klein, co-CEO and co-founder of ListenFirst Media told Deadline that the Twitter chatter for TFIOS about a month before the premiere more than doubled the amount of chatter for some of the year's biggest films thus far, including The Amazing Spider-Man 2 and X-Men: Days of Future Past.

Much has been said about the initial trailer, which currently has more than 20 million views and is the most Liked video in YouTube history, standing at more than 306,000. Green and his brother Hank have peppered their popular Vlobrother page with updates about the film, and Fox has released a slew of trailers, on-set interviews, teasers and Q&As on the site.

TFIOS has also embraced deputizing, so to speak, the online community to help spread the word and, in some cases, dictate publicity themselves. Have your fans determine the schedule for a publicity tour? Sure. Allow Green, who provided not only the source material but the overarching spirit of the entire enterprise, nearly unlimited ability to keep his legion of followers updated via video clips, photos tweets from set? Of course. Create ambassadors called "Fault Fanatics" to help spread updates about the production across the social media sites they already populate? Naturally. George Dewey, Fox's senior vice president for domestic digital marketing, told Yahoo! Movies that more than 20,000 people had volunteered to become Fault Fanatics.

The upcoming “The Night Before Our Stars,” is another fine example of engaging and rewarding fans. On June 5, filmgoers who see the film first in this campaign will also be taking part in the largest live simulcast ever. The event will feature the film’s three leads (Woodley, Elgort and Nat Wolff), author John Green, director Josh Boone, producer Wyck Godfrey and live performances by Birdy and Nat and Alex Wolff.

Like the Twilight franchise, TFIOS cannily enlisted popular, talented, teen-beloved musicians to not only create a soundtrack that's a mosaic of angst, young love and a slew of other teenage emotions, but engage fans using their social media pages. Exclusive tracks from artists including Lykke Li, Grouplove, Birdy, and Charli XCX generate major buzz and pop appeal, not to mention the seamless way these artists are displayed on the film's Tumblr. There are more than 70 YouTube music videos related to the film, including some made by fans, that have garnered more than 25 million views. Ed Sheeran's song for the film, "All of the Stars," has drawn almost 5 million views and more than 142,000 Likes.

Perhaps it's fitting that a film about teenagers just taught a masterclass on social media marketing.