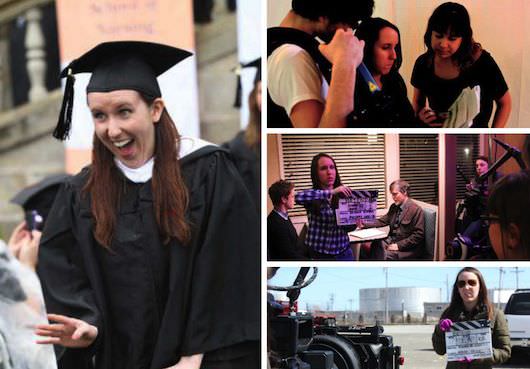 So You Graduated Film School, Now What? A Recent Film Grad Explains

I remember spending most of the time leading up to graduation feeling like my education had been worthless. I went to a liberal arts college, majoring in film in a program that emphasized that only half of my education would come from a classroom. The rest would come from working on student films, shot exclusively on weekends. Admittedly, giving up all of those weekends contributed largely to my sense of semi-entitlement when I graduated, and I spent a lot of time in those first months wondering when (if ever) I’d have the chance to be on a set again.

In college, I’d gotten really, really good at producing student films. I coordinated scenes with dozens of extras, convinced business owners to let students use their restaurants and stores for free, and developed quite the knack for dealing with town police when they showed up on set. I got a ton of experience I knew would be applicable the moment I graduated. I had directed! I had produced! I had been the assistant director on the below film, shot over four days in Cape Elizabeth, Maine at three different lighthouses in insane weather (it snowed every single day, and we were shooting overnight with 15 people crammed into lighthouses), there was no way I wasn't going to find work.  I had a degree and all these skills – I was unstoppable!

Or at least, I would have been, except for the fact that "Student Film Producer/Director/AD" isn’t an actual career, and the jump from that to actual producer or director is more like a gigantic leap over the Grand Canyon. I graduated and quickly faced the same harsh reality that so many of my peers were facing; I had no idea how to do what I wanted to do next.

So I did the only thing I was certain couldn't hurt—I worked my butt off researching my options.

I made it my full time job to get a job and spent weeks reading articles on breaking into production, researching companies I was interested in, refining and perfecting my resume. I put as much effort into finding a job after graduation as I did on any project in film school. Somehow, as often is the case with the addition of effort, my luck changed and I started to have more opportunities than I knew what to do with.  It took a while, but now I can proudly say I get to go to work every day and do what I love.

If you just graduated, I’m sure you’re feeling a lot of the same lost and confused feelings that my peers and I felt after walking across the graduation stage last May. Whether you’re trying to break into the industry, or simply need help figuring out what it is you should be doing, try some of these tips:

Use your network. Your college internships, old teachers, and other alumni all great resources for finding a job – just don’t be the person who only comes out of the woodwork when you want something. Reciprocity is key. Invite them out for coffee and steer the conversation towards what they do. You never know what you could learn. Even if you don’t want to work at the company they work for; they may know someone who works at the perfect company for you.

Don’t have a network? Build one. I like to think of networking as having a professional social life. You can join a professional organization, such as NYWICI or the Scriptwriters Network, and attend events for other professionals at various stages of their careers. You can also look for people with careers you admire on LinkedIn and reach out to them. People love talking about themselves – you just have to be brave and ask the questions. You never know who you're going to meet so always say yes when you're invited out for a drink or coffee.

Get Creative. Filmmaking isn't a traditional career so why take the traditional approach to finding a job? I took advantage of my free time after I graduated and learned InDesign to make my resume more well rounded. It helped my resume stand out and taught me a new skill I add to it. Honing your skills or putting together a reel can help you stand out as a candidate, and will show potential employers that you can be constructive with “free time.”

Make your thesis work for you. Countless film students give up sleeping and their savings to produce their thesis films, and yet few get seen outside of seminar rooms and collegiate websites. Even after you graduate, you can use services like WithoutABox to enter it in festivals, or as a component of your resume.

Do what you want to be doing, before someone pays you to do it. Do you want to be a screenwriter? Work on spec scripts. Is your dream to shoot the next blockbuster? Buy or rent a camera and shoot everything that interests you. Get out there and get creating! Then, share your work with other aspiring creative on community sites like Behance or The Creative Finder.

When you do land that first job, remember that there is always more to learn. Take advantage of any opportunity to learn from those further along in their career. You might be surprised by how willing Hollywood is to help. Reading Tina Fey's "BossyPants" or taking James Franco's screenwriting class on Skillshare.com (click here) are great ways to stay a film student long after you've graduated.

You can do this, so long as you're willing to work your butt off.