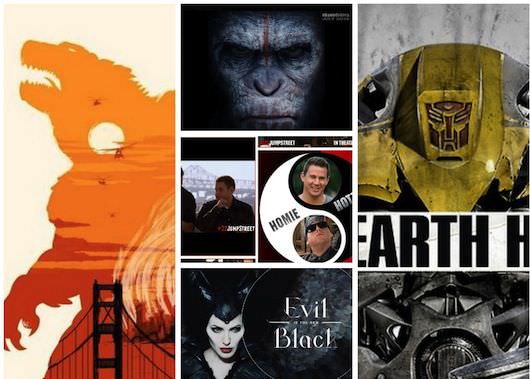 Lions and Transformers and Giant Lizards, Oh My! Studios Taking to Tumblr

Adidas became the first major brand to build an advertising campaign on Tumblr, back in 2012, shortly after Tumblr announced they would be including paid advertising on their site. Today, the Adidas Tumblr page is a wonder of beautiful product shots, videos, artwork and what feels like an infinite amount of scrollable content.

Tumblr now hosts nearly 189 million blogs comprising more than 83 billion posts, with more than 90 million posts created each day. Along with being a gif-laden time-suck of anthropomorphic animals and a veritable inexhaustible incubator of inanity, it has also become something of an online salon for creatives, artists, academics, scientists and very clever fans. It's that latter group that has led movie studios to use the medium in increasingly sophisticated and fan friendly ways.

As we wrote earlier in the week, studios like 20th Century Fox are using platforms like Tumblr to create immense buzz for their films. Look at the master social media work they did for The Fault in Our Stars.  The studios have learned to be much less proprietary about their films, allowing fans to create gifs, memes, artwork, remixes and more and post them on their own Tumbler pages and, increasingly more often, the film’s Tumblr page, too. They've also become very good at creating really compelling, and very different, pages for their specific films.

Here's a brief look at some of the Tumblr pages that are creative endeavors in their own right.

Just take a look at Warner Bros. Tumblr page. You’ve got gifs of Tom Cruise in full ExoSuit armor, a Twitter feed to the left with mentions of their films, and a big, beautiful carousel on the top that takes you to the individual Tumblr pages of their films, from Godzilla (which includes YouTube videos like the Godzilla remix above, or this fun video about whether or not Godzilla could exist, and very cool bespoke artwork) to the late summer release of if I stay, which, like The Fault of Our Stars, is a YA novel adaptation, and will likely get a very thorough social media treatment itself.

One of the beauties of Tumblr is that the platform is so malleable, so no two pages need look remotely alike. Paramount’s page is has an undeniably cool gif of one of the transformers, well, transforming, from the upcoming fourth film in the franchise, Age of Extinction, front and center. While Transformers currently dominate their page, there are photos from the Paramount lot, plenty of Teenage Mutant Ninja Turtles gifs to go along with our favorite shape-shifting robot aliens, and, a great poster for Christopher Nolan’s upcoming Interstellar, a film that's been kept tightly under wraps save for some enigmatic teaser trailers that give us only a glimpse of what's to come. One of the beauties of this new world of multifaceted ways of marketing your movie is you can find new and interesting ways to not give much away.

Sony created a nifty page for the upcoming 22 Jump Street, a film that seems tailor made for the goofball heart (read; the gif) that beats inside Tumblr. One take on one of those funny Someecards shows and illustrated Jenko (Channing Tatum) and Schmidt (Jonah Hill) in a coed bathroom on a college campus, discussing its relative (or lack thereof) merits. Think Like A Man Too has an appropriately Vegas-themed Tumblr page that includes a Gif generator and, in a fitting touch, an alibi generator to boot.

Universal’s current Tumblr is comedy heavy, considering they’ve got both Neighbors (check out this giant Efron-gif) and A Million Ways to Die in the West out right now. There’s really something for everybody on their page, from Mumford's other son (Neil Patrick Harris in a mustache) to Amanda Seyfried showing off “The original resting b*tch face,” to a shirtless Zac Efron manning the grill.

Fox’s Dawn of the Planet of the Apes page has some really cool ‘on the set/on the screen’ images of actors, headed by Andy Serkis in the role of the simian leader, Caesar, as they look in their performance capture gear and how the finished product looks, with Serkis and the rest of the simian-playing cast looking perfect as primates. There’s a ton of fantastic images to gawk at, a great use of the medium to promote what looks to be a pretty awesome film.

Disney didn’t slouch when creating Maleficent’s page, which does a nice job of seamlessly weaving in video (but without resorting to having to click on a YouTube link or making it just a gif). They also had the grand idea of making the page something of a “how to” guide (for example, they tell you to mimic Maleficent’s force of nature energy by remembering “your entrance makes a statement that, once spoken, cannot be undone,”) as well as a fashion source, with the catchy motto “Evil is the new black,” referring, of course, to the undeniably fashionable titular villainess.