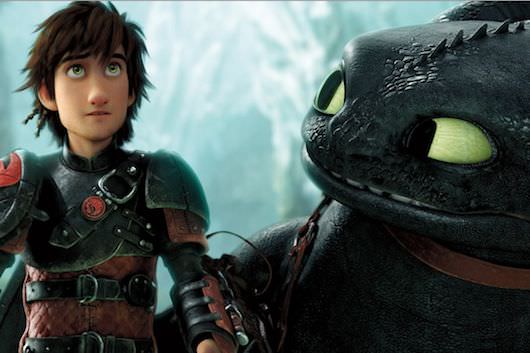 How to Train Your Dragon 2‘s Writer/Director Dean DeBlois

When Dean DeBlois and Chris Sanders film How to Train Your Dragon was released in 2010, it was a critical darling but had something of a sleepy opening. Adapted from Cressida Cowell’s book, How to Train Your Dragon contained everything that you expect from a stellar animated film—a great script, no small amount of wit, dramatic depth and fantastic effects. At its core it had a relationship that was hard to beat, a young boy named Hiccup (voiced by Jay Baruchel) and a young dragon named Toothless, who are supposed to be mortal enemies (Hiccup is a Viking, and dragons are, well, dragons), but they become fast friends. Hoping to become a storied dragon hunter, Hiccup finds himself learning that there’s more to these creatures than fire-breathing monomania and destruction. They are, in fact, complex, even tender beings.

“The first film was inspired by The Black Stallion, ET, White Fang, Born Free," says writer/director Dean DeBlois. "They have this really tender connection between humans and animals (or aliens, as it were). And there’s something so noble about it, that belief and trust, and that unwillingness to give up on each other, it was really inspiring and heart warming, and we tried to put that up on that a screen.”

Eventually, the TLC that was put into making the first movie would win out. How to Train Your Dragon stayed near the top of the box office for an astonishing seven weeks, its considerable staying power the result of rave reviews and stellar word of mouth.

DeBlois returned as writer/director of How to Train Your Dragon 2 (he wrote and helmed the film himself this time around), and in the four years since the original, DreamWorks animation has considerably beefed up their computer generated prowess with their animation tool Premo, and DeBlois, buoyed by the first film’s success, decided playing it safe was not an option.

“I took on the sequel’s expectations with great trepidation,” he says. “The idea of doing a sequel is daunting enough because there’s so many disappointing ones, and to follow up a movie that has such a vocal fan base is scary.” One of the earliest reviews to come in, from Variety’s Peter Debruge, writes that DeBlois’s sequel is a smashing success, “more emotionally satisfying than so many of its live-action counterparts.”

DeBlois pitched the studio the idea that this second film should be the middle story in a trilogy. “Rather than retread the same story material, we should meet Hiccup at a different stage in his life, meet him at a different crossroads, where he’s now being tasked with taking over his father’s mantle.” That mantle is the chief of their Viking tribe, which Stoick (Gerard Butler) has held for many years, not a small job by any stretch, but Hiccup is an unwilling heir. “This is not a job he feels a great affinity for,” DeBlois says. “He has a restlessness about him, he wants to be out at the edge of the Viking map, exploring, but soon enough he sees trouble coming the tribe’s way, in the form of the conqueror of a dragon army.”

This dragon hunter is named Drago Bludvist (Djimon Hounsou), a bad guy through and through, which is a marked difference from the first film, which eschewed outright villains in favor of the misunderstanding central to its storyline—humans and dragons were enemies because of ignorance more than anything else. One of the major risks DeBlois took, and what elevates this sequel into the rarefied air of truly great animated features, is that he refused to shy away from the darker, harsher realities that the story he was writing suggested.

“The tragedy and the emotion that carries forward from Hiccup losing his leg in first movie is even richer and deeper in this movie,” DeBlois says. Just look at the films that Debruge compares DeBlois’s sequel to—Bambi and The Lion King, films that “aspire to join the ranks of epic poetry,” and films that take the consequences of their animated heroes and villains actions very seriously.

Thanks to the incredible leap forward in DreamWorks Animation’s proprietary technology, from their Emo animation tool to Premo, DeBlois and his team were able to create much more complicated dragons, and populate the frame with them in scenes that would have been unthinkable only four years ago.

“Premo empowered us,” DeBLois says. “I had some pretty lofty, ambitious ideas for the second movie’s scope, scale and character count, and the new software allowed us to pull that off.” With Emo, four years ago, the animators could only work on one character at a time or the system would crash, and rendering these creations was a lengthy, often painful process. With Premo, they were able to embellish their dragons with really dense, rich characteristics, which meant that each beast not only looks better in the sequel, but their personalities are easier to discern. And for the battle sequences that this second film demanded, they could now flood the frame with dragons. “Flying over the battlefield with Drago’s thousands of dragons below him…that would not have been possible,” he says.

“Behind the scenes, the tech is constantly getting better,” DeBlois says. “We can actually render our frames faster, include more, create richer textures. It’s a natural evolution, every year we get better at hair, fur, water, fire, clouds, stuff that is traditionally difficult to make look good is getting better and better.” 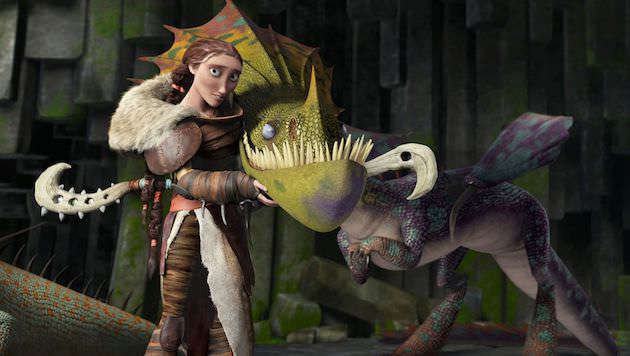 An interesting twist to the improved computing power is how it actually allows the animators to go back to the more old school techniques they prefer. “The software allows animators to work with their hands again, so instead of pull down menus with tabs to click on, they can now work with a stylus and tablets, creating their creatures like a stop motion animator works with clay. This tool allows them to express themselves in ways that are super finessed and subtle, so in most intimate scenes between two characters, there’s way more emotion than we were able to convey before.”

That was crucial, considering since the first film, the residents of the Viking land Berk have gone from enemies of the dragon race to more or less best friends. One of the film's central joys is how creative DeBlois and his animation team have gotten with the various species of dragons, not all of whom breathe fire, and one of whom, memorably, doesn’t fly but rather swims. This specific dragon is at the very top of the complex hierarchy that the filmmakers created for their story. The king of all dragons is a mammoth creature (inspired, in part, by wooly mammoths) called the Bewilderbeast.

“The first film had set up the idea of this dragon hierarchy, where the lower rung dragons serve the upper dragons,” DeBlois says. “That was the spark that led to this crazy design of an artic creature, a water dragon that ingests massive amounts of water that he can regurgitate with extreme force, freezing it into this spiky spray. We combined ideas of the wooly mammoth with the strength of musk ox and the color of beluga whale.”

The Bewilderbeast doesn’t fly, yet his mass, power and unique skill-set make him the most dominant dragon there is. In another clever touch, Bewilderbeast communicates to the other dragons by ultra-sonic sound, which is the way they navigated in the first movie.

“Most of our dragons are based, in some way, on real animals,” DeBlois says. “We pick attributes we like, so for example, Stoick’s dragon is Skullcrusher, a member of the Rumblehorn species, and is a combo of a rhino and truffle pig, and the coloring scabarb beetle, that iridescent hue,” he says. “This tells you about his size and clumsy girth, but at the same time, Skullcrusher is an incredible tracker, his nose is always in the ground (like a truffle pig) where he’s seeking out things.”

It took DeBlois and his team the better part of a year to create their dragons, from the design phase, which is essentially sketches on paper, to the sculpting of each character in 3D, to breaking each dragon apart and articulating every part to make sure all their bones, muscles and fat are in the right places. They’re then given a fresh paint job by the surfacing department, and every minute detail of the texture, tone and look of the skin is fine-tuned.

One of the questions DeBlois is gunning for in his dragon trilogy is, where, exactly, did all the dragons go? Citing a discussion he had with Cowell, the author of the source material, he said she wanted to investigate what might have happened to the dragon race, to end her story with the end of the dragons.  “We return to the world we know,” DeBlois says.  “But maybe the dragons can come back.” He sounds hopeful, which is understandable considering how well he's created a world in which they thrive.