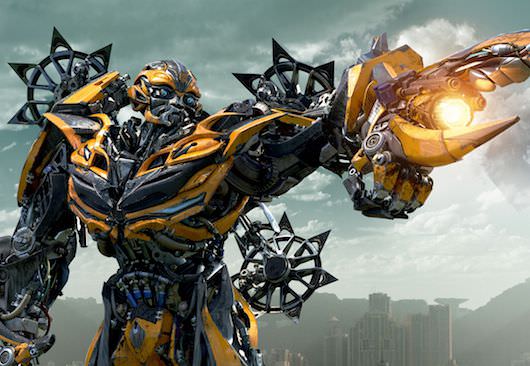 Michael Bay’s Transformers 4: Age of Extinction is the most technologically ambitious film in the franchise. Working again with Industrial Light and Magic, Age of Extinction showcases astonishingly fluid, realistic robotic shape-shifting—somehow they’ve managed to make robots transforming into vehicles and back again into a kind of visual poetry. Age of Extinction, which will be released in 2D, 3D, and Imax 3D, is the work of hundreds of people, with every scene, every moment and every frame bearing the fingerprint of dozens of artists working together.

There's a scene in Extinction in which Autobot’s alpha-male, Optimus Prime, rides a massive Dinobot T-Rex, called Grimlock, and the two rampage through Hong Kong on their way to battle some new, very bad machines. Let's do a brief, truncated tally of some of the departments that worked on this one sequence: You've got your practical effects (Michael Bay and his crew filming actual explosions, the use of actors and stunt people, and location shooting in Hong Kong and China), animated effects (the animators who create and place Prime and Grimlock inside the scene Bay’s team shot), rigid dynamic effects (the large scale destruction of buildings crumbling, cars flipping, etc.), particle effects (any particulate matter created by the destruction, which includes dust, sparks, smoke, rubble and fire) and, the subject of this article, the lighting and rendering department (the manipulation of light and the way it reacts with the characters on screen). The lighting and rendering department is headed up by supervisor David Meny, who had to make sure that the way the light moves and changes, the way it reflects off of Prime’s blue and red metal or Grimlock's scarred, dark metal haunches, looks both plausible in the actual environment that Michael Bay shot, and, looks aesthetically pleasing enough to satisfy the director.

So how does he do it? He starts with the plate.

The practical photography that is shot out there in the real world and is given to Industrial Light & Magic to work on is referred to as ‘the plate’ or ‘plates.’ “The plate is the shot,” Meny says, “It’s the context of that beat of the movie.”

So Meny starts with a series of 2D images captured in the real world, and then helps build the 3D scene around that in the computer. “The animators add the characters and apply the motions, then we build up around the animated scene and add the light, the shadows, and make you believe that that transformer is actually there on location."

“Often Michael [Bay] tries to film as many practical explosions and gorgeous plates as possible, and we try to match our characters into those environment,” Meny says. This means when Bay and his team film exterior shots during an overcast day in Hong Kong, it’s up to Meny to make sure that when Prime or Bumblebee or one of the new villains is placed into the scene, the light reflecting off their massive metal shoulders matches the real environment that was shot on that day. They mostly deal with plates shot by the first and second units, and use high dynamic range panoramas of those shots to match their lighting accordingly. Meny also has references for how light reacts with the various Transformers in different settings, whether it’s how a bright sun in a clear sky would play off Bumblebee’s black and yellow armor or how a cloudy day might look on Crosshairs green and silver cast.

Meny says that Bay asks his artists to take inspiration from the photography plate, but to make it look as cool as possible. This might mean bringing in lighting layers that weren’t a part of the actual shot, using mirror boards, or snaking a glint or a shadow along a character’s body to draw the audience’s eye. Drawing the eye is a huge part of how Bay and his team get you to focus on a specific point in an otherwise chaotic, busy scene. 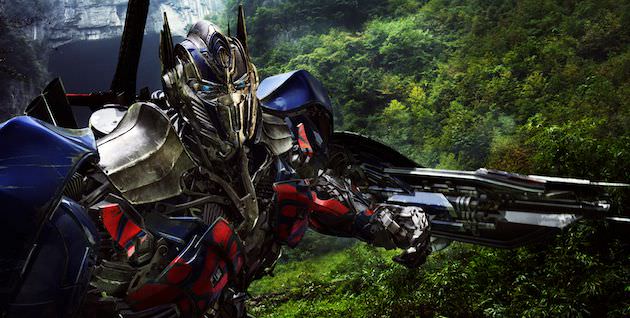 “When Optimus Prime is transforming, we’re trying to find a balance between complexity and clarity,” Meny says. “These characters have so much geometry to them, they rotate, move, and disappear within each other, so in lighting we’re trying to highlight and draw your eye to their richness.”

What Meny and his team do is take a very simple shot, say, Prime in repose, and add lighting layers, shadows, creating complexity in the image. When Prime transfoms from semi-trailer truck to his robot form, that’s a whole lot of dark metal moving, shifting, sliding and slotting—in short, it’s confusing. So Meny uses what’s around Prime’s transformation, be it water or sun glinting off a building or a farm house, or the patterns created by nearby foliage, to make the moment both more beautiful and much clearer. “In one particular sequence in at a national park in China, it’s raining, so we added water drifts on Prime’s metal surfaces during transformation,” Meny says. Often Bay will ask Meny for specific lighting cues, say, a glimmer that shines on Prime’s truck window, which will then draw the eye to something reflected there that Bay wants the audience to see. “We’re constantly adding visual complexity in this way.”

Breaking down a Scene Shot by Shot

Back to the scene of Prime riding Grimlock—they come through this lush green valley in China, between large hills, and destroy an arched wall with a forest beyond it. This scene isn’t purely CG, in fact, it started out as a practical plate that was filmed in Detroit.

“It was shot in an open field with a practical wall that the production designer built,” Meny says. “It had a partial arch, then in CG we created a pagoda to go on top of that arch, so we’re extending the set piece. Then Grimlock crashes through it.”

Pat Tubach, ILM’s visual effects supervisor, worked directly with Bay’s team on set, taking reference photography for reconstructing the scene in 3D. “He’s taking measurements of key props, checking the camera tilt and height, getting the lens info, and capturing our lighting reference in high definition panorama of the entire location,” Meny says. “That gives us the right intensity of sun and the color temperature of the ground relative to sky.”

Tubach’s panorama is then taken by ILM’s animation team, who provides motion, and then the rigid dynamics team creates the destruction (the science behind what the rigid dynamics team is doing, Meny says, is “taking actual pieces of geometry and colliding them against each other and shattering them.”) Then the particle effects team augments that destruction, adding smoke, fire, dust, sparks, particulates and all the finer remnants of destruction, and once all that is done, Meny comes in and lights it all.

The hills in the background while Prime rides Grimlock were added digitally. Because the practical scene was shot in Detroit, where the production had reproduced a section of Hong Kong in a parking lot, there was a lot of sun, but when ILM added those hills, they essentially took the sun away. “Now it’s darker and greener, and you’ve also got Prime, who is dark and blue, and you’ve got Grimlock, whose a dark color, so now you have to make your character pop visually,” Meny says.  “So with lighting we can add kick, shaping and shadowing, as well as movement by using mirror boards [mirror boards are basically huge sheets that they crinkle up, which the light then reflects off of in a thousand different directions]. So as he’s moving, it’s the motion of the light, and the change of the light on their bodies, that really draws your eye to what you should be looking at.”

“We’ve learned a lot of lessons over the past three films,” Meny says. “We asked ourselves, ‘How far can the animation team push the intensity of the emotion, finding the right balance of weight and gravity?’ That’s where you start. Then we’ve taken our rendering approach, how we visualize that action, and brought that into the modern age, more controls and leveraging the raw computing potential behind that. We’ve drifted away from brute force approaches and shifted it towards to giving the artists more tools to achieve the look they want, and the cost of that is a lot more computing power. It’s the right recipe, you want your artists to be creative, and you want your computers to do as much heavy lifting as they can.”

Meny says that this Transformers required more work, in a shorter amount of time, than any of the previous films had. "You have to be focused on what’s the next visual step, what’s this moment in the film about, rather than, ‘If you take this software and plug it into this, you’ll get this result.’ We’re seeing a trend to getting back to becoming more contributors and artists to he filmmaking process, rather than techs behind the scene in a lab. It’s the constant iterations that bring out the best work in everybody. We’re all fans at heart.”