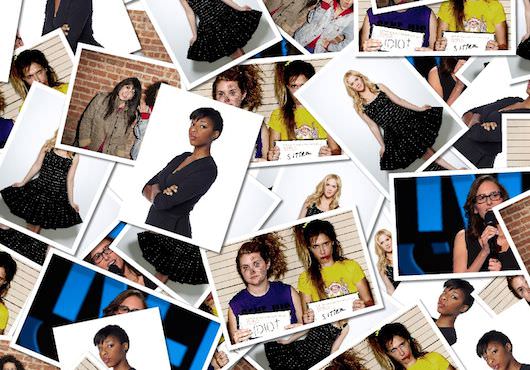 If you haven’t watched any of Inside Amy Schumer on Comedy Central, you should start doing so immediately. Far from coming out of nowhere (Schumer’s been on Comedy Central in several capacities over the years, and finished fourth on NBC's Last Comic Standing), there are still many people in the country who haven’t heard of her, so watching her show can feel like witnessing the sudden birth of the total comedy package—like a foul-mouthed, hilarious Athena bursting fully formed from Zeus’s head.

Schumer isn’t the only hilarious woman on Comedy Central, however. In fact, the channel has a history of hosting, for long stretches or short blips, ferociously funny female stars. Wanda Sykes appeared in an hour long Comedy Central special, Tongue Untied, in 2003, and was ranked by the network as number 70 on the list of the 100 greatest all-time stand up comedians and won a Comedy Central Commie Award for “Funniest TV Actress” that same year. She also hosted the channel’s show Premium Blend, and voiced the recurring character Gladys on their puppet show Crank Yankers. Although not long for this world, Sykes had a show on CC called Wanda Does It.

Another of the channel’s female legends is Sarah Silverman, who had The Sarah Silverman Program, which aired from 2007 to 2010. Silverman's a longstanding comedy juggernaut, and for CC she's also roasted James Franco, Bob Saget, William Shatner, Pamela Anderson and Hugh Hefner.

What we wanted to do is take a peek at some (only some, the channel does a ton of comedy shows and web series) of the bright lights on Comedy Central and give you a heads up on some seriously talented women you might not have heard of. We’ll start with Schumer, despite the fact that she’s hardly obscure, because she’s that funny, and move on from there.

Schumer is arguably one of the most versatile women in comedy today. Regardless of the format, be it stand-up, sketch, or man on the street interview, Schumer excels. Take her riff on Aaron Sorkin's relentlessly wordy, walky ways in the above, flawless sketch “The Foodroom." This is not only a freakishly fantastic Sorkin parody, it’s also incredibly well shot, edited and acted. Here’s Schumer’s take on the rhyming maid of honor toast we've all cringed through at a wedding, which quickly segues into a string of various lunatic rhymes at increasingly inappropriate venues. Initially, Inside Amy Schumer was going to be a Chelsea Lately-esque panel show, but her head writer, Jessi Klein (more on her in a second) suggested she try something more ambitious. The result is one of the funniest shows on TV. Schumer’s star is on the rise; she wrote and is starring in the upcoming film Trainwreck, which a minor comedy star by the name of Judd Apatow is directing.

“I recently got engaged,” Jessi Klein says during a standup routine on Comedy Central, “and I know some of your are confused, because you’re like, ‘But you’re a lesbian.’ I’m actually not a lesbian. I just feel everything lesbians feel.” Klein’s already had a stellar career as a comedy writer, having been a staff writer on SNL, and she's crushed stand up sets for Comedy Central (and the Moth, and elsewhere). She also stole her scenes in Mike Birbiglia's Sleepwalk With Me. Now Klein is the head writer and executive producer on Inside Amy Schumer, a powerhouse partnership between two seriously talented comedians.

At roughly the 1:37 mark above, Jessica Williams delivers her patented hilarious bewilderment in a skit involving a sentient kitchen computer (spoofing HAL from 2001: Space Odyssey) that makes casually racist remarks to the increasing frustration and fury of the Daily Show's rising star. Williams, the youngest of the Daily Show correspondents, is quickly becoming one of its most polished field reporters, eliciting laughs from the thinnest of sketches and most stifling of interview subjects. During John Oliver's stint as the host of The Daily Show when Jon Stewart was off making a film, Williams delivered a report "from one of New York's most crime ridden neighborhoods." "I'm on Wall Street, the white Bronx, business Harlem," Williams says, to the whoops from the live audience and however many people were watching at home. Williams has become a fantastic (and many would argue, much needed) addition on a show that has launched countless stratospheric careers.

Jillian Bell’s and Charlotte Newhouse’s Comedy Central web series Idiotsitter, which could become a regular half hour show on the network, showcases the wildly original writing and acting talents of the two former Groundling performers. Bell is a regular on Comedy Central’s Workaholics (she also landed small roles in Bridesmaids and Paul Thomas Anderson's The Master), Newhouse has guested on shows from The Big Bang Theory to Community, together, they are insane—and insanely hilarious. Bell plays the unhinged, oft-incarcerated woman-child, Gene, in need of a GED tutor, and Newhouse is Billie, your uptight tutor desperate for money. It's a perfectly preposterous conceit that showcases their immense talents—Idiotisitter is the type of "why didn't I think of that?" idea that answers "because you're not as funny as Jillian Bell and Charlotte Newhouse."

The creation of Broad City, one of Comedy Central's most exciting new projects, was due in large part to several smart, funny and talented women coming together to lift the clearly talented Glazer and Jacobson from doing a web series to a half an hour show. The duo, who met while doing Upright Citizen's Brigade in New York, were finishing up their Broad City web series and were planning on pitching it as a show in LA. As they told Splitsider, thanks to the support of their manager, Samantha Saifer, and their UCB contacts, they decided to end their series by trying to do something major—like have Amy Poehler appear in it. She did, the three hit it off, and along with the support of Comedy Central executive Brooke Posch, the show is a smashing success.

There's a lot more talent brewing over at Comedy Central that we didn't have the space to mention, including Fortune Feimster, Bridget Everett and Nikki Glaser, to name only a few.