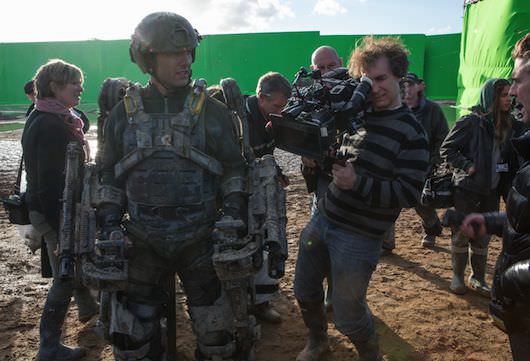 How might a soldier be able to fight giant, sophisticated, and fantastically violent aliens with sundry razor-sharp tentacles and a taste for carnage? Simple: just create an articulated armored suit capable of protecting a soldier’s body while delivering a massive amount of firepower from weapons mounted to the carapace. This was the challenge the filmmakers behind Edge of Tomorrow created for themselves, and instead of relying on CGI to create these fantastic and fearsome combat “jackets,” or ExoSuits, they actually built them.

The film is an adaptation of Hiroshi Sakurazaka’s sci-fi light novel “All You Need is Kill.” The plot centers around an alien invasion and time travel, two common science fiction tropes that are cleverly spun in both the novel and director Doug Liman’s adaptation. Aliens have invaded Earth and are winning battle after battle against the United Defense Force, the global military assembled to protect the planet. The invaders are winning largely due to their ability to mimic and respond to whatever combat strategies are thrown at them. They appear to be invincible, until humans create the aforementioned combat “jackets” (essentially exo-skeletons) that allow them to fight back, including winning a victory at Verdun, thanks to the ferocity of Special Forces soldier Rita Vrataski (Emily Blunt). 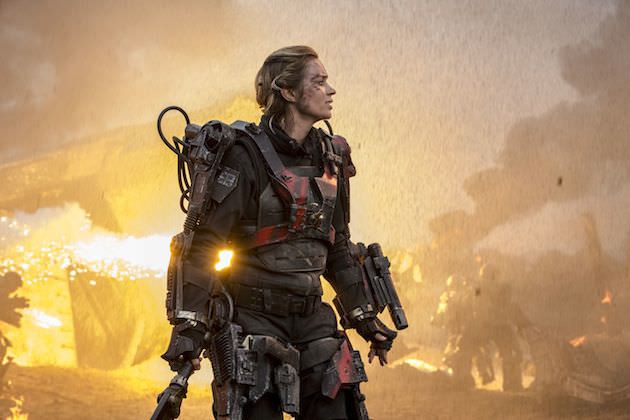 Despite the efficacy of the combat jackets, the aliens are still spreading across Europe and are poised to sack the United Kingdom. Major William Cage (Tom Cruise), a PR man within the military and a totally unproven soldier, is inexplicably dropped into a suicide mission at the front. He promptly dies. And then he wakes up, also inexplicably (it’s always inexplicable when you survive your own death) and is forced to live out the same murderous combat, again and again, dying every time.

Each new life, however, grants Cage and Vrataski (whom he watches die, again and again, as well) a chance to hone their skills and get one step closer to figuring out how to defeat the Mimics. They can only do this by donning those massive combat jackets (called ExoSuits), which meant that Blunt, Cruise and the rest of the actors playing soldiers had to train well in advance of filming. Blunt has talked about how, despite all her training, nothing could really prepare her for the intricate fighting sequences, all done in those heavy, hard ExoSuits.

Liman made sure that production designer Oliver Scholl and costume designer Kate Hawley created credible battle suits: these had to be armor that would be available in the near future, aking to exo-skeletons like the ones defense programs are currently exploring. 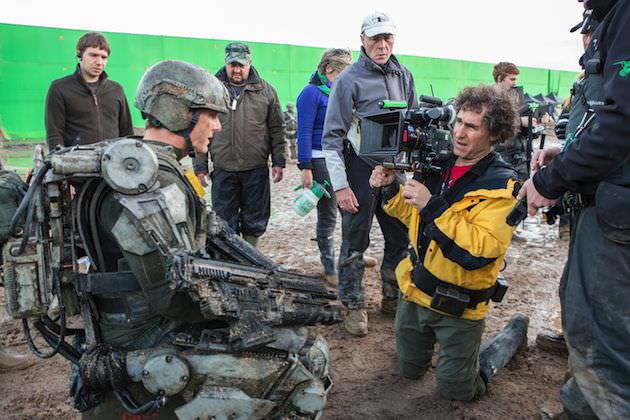 Part of what makes the ExoSuits in Edge of Tomorrow so believable is that, as militaries the world over do, the suits are made for battle, not for sale, so the design elements are utilitarian, meant to protect flesh and harm enemies and nothing more. “Simplified and raw,” is how Liman described the look he wanted for the multi-purpose ExoSuit.  Yet the suits had to allow for the characters wearing them to be seen, and, they’d need to be light enough for Cruise, Blunt and the rest of the cast to run in them. The suit needed to look real because it was, a major task for the filmmakers. 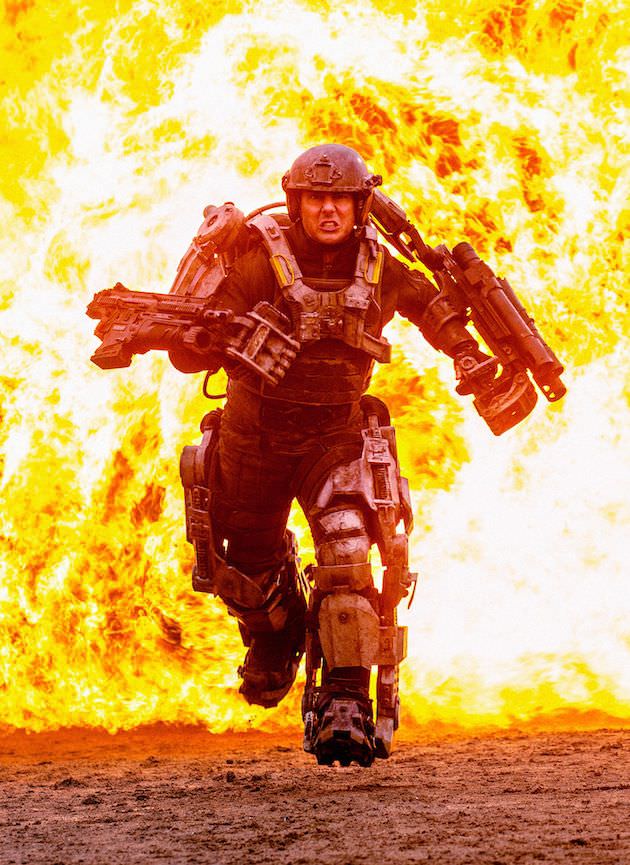 Scholl and his team, working with head ExoSuit builder Pierre Bohanna, developed several ExoSuit concepts for Liman to choose from. They began with 2D and 3D concept art that eventually led to an aluminum prototype frame complete with pivot points and hinges, which helped them determine the rules of the suit. It was then up to Hawley to help the team create a credible aesthetic design for the suit, creating appropriately gritty color palettes and surface treatments. 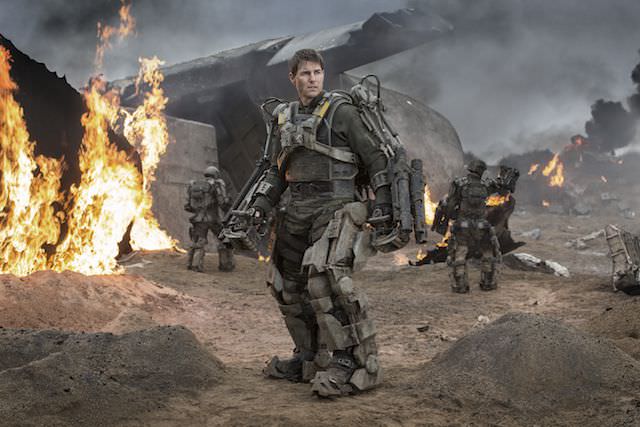 Edge of Tomorrow’s filmmakers eschewed purely computer generated solutions to create a handmade, and viscerally real, look for a film that manages to make a battle on the beaches of Normandy between humans and the Mimics breathtakingly real. The costume and art departments worked together to create a seamless integration between the battle scared, highly functional ExoSuits and the weaponry they required to contend with the aliens.

The ExoSuits were designed to match the multiple axes of human joints, allowing them to bend along with the body of the actors. Cruise was eventually presented with a foam mock-up that had been sculpted on the frame. The frame alone weighed up to 100 pounds, and once the weaponry was attached it could reach 135. Cruise, well known as a fearless performer of his own stunts, has said that he never fully conquered the suit, which actually worked perfectly for his character, an untested soldier who has to learn how to fight throughout the course of the film.

Cage, Hawley and Cruise all collaborated as the ExoSuit went from a prototype to the real thing. Cruise had told Hawley he wanted the armor to evoke an image from war photography, something that resonated a bleakness, a toughness, and something that also spoke to the humanity of the individuals risking their lives to don it for battle. They painstakingly worked out every last detail of the equipment, from helmet to footwear, creating battle-scarred armor that looked vividly real.

Ultimately, seventy hard material and fifty soft material ExoSuits were handcrafted for production from 200 hand-cast components. This meant that, during peak production, the ExoSuit workshop was making 650 components of the ExoSuits per day, including another 170 parts (nuts, bolts, screws, etc.) which were used to complete each one. They would be molded and fused, after which it was off to the fabricating shop to be sanded, painted and cleaned. There were three different versions of the ExoSuits; grunts, dogs and tanks. Each suit had different weaponry, from the dogs' rocket-launching guns to the tanks massive machine guns to the grunts' smaller firearms. The whole process of building the ExoSuits took nearly five months.

There are key differences between the suits Cruise and Blunt wear. Because Blunt's character is a hero, a bespoke suit that helped show off her swagger was created, including a rotor blade from a destroyed helicopter that she wields as her primary weapon. Liman has said that Blunt's character has a Joan of Arc quality about her, so they sprayed red slash marks on the chest of her ExoSuit, which is a nod to Sakurazaka’s novel, "as if to say she had been to hell and back and lived to tell about it," he said. Rita doesn't even wear a helmet, because she correctly ascertains it won't help her. 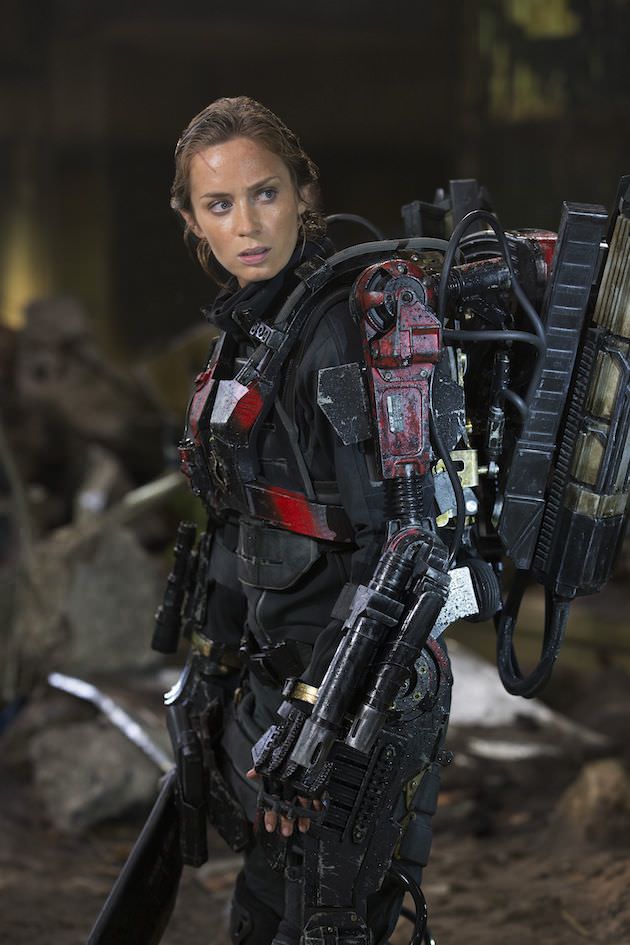 Getting the ExoSuits on the actors required a team of four handlers for each actor. When they were testing the suits, it took Cruise roughly 30 minutes to get into it and another thirty to get out, a lifetime on a massive movie set where every minute counts.  He told the team that by the time they started shooting, he wanted to be get to get in and out in under a minute. They eventually got it down to 30 seconds. 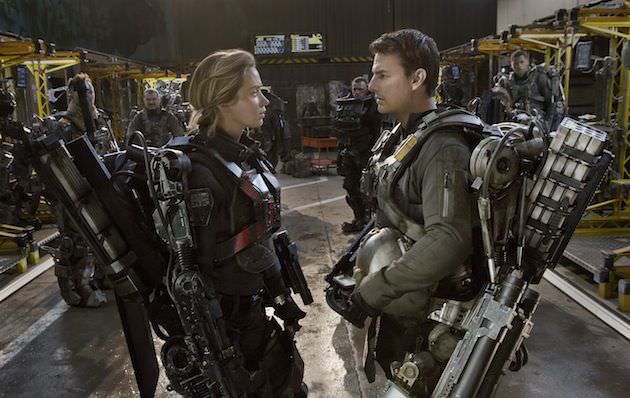