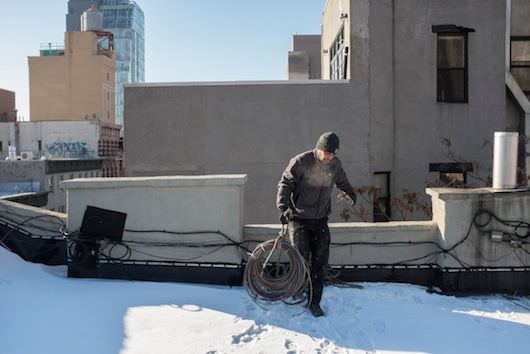 If you've been to New York City, you've experienced the odd sensation of being the recipient of an endless stream of sales pitches. Whether you're waiting for the subway, walking down Houston street or sitting in a taxi, you're surrounded by advertising. Check out this upcoming show at Mercury Lounge! Buy this brand of flavored vodka! Do whatever is being asked of you on those taxi monitors before you can get the touch screen to respond to your desperate tapping off the 'Off'' symbol! This is to say nothing of the neon tubes of Times Square, which have been schilling all manor of product, from phones to liquor to Broadway shows, for nearly 95-years.

Yet not all advertisements are created equal, and we wondered for quite some time who was responsible for the magnificent, massive movie posters we saw throughout the city, like this beauty for The Dark Knight Rises, or this one for Ben Affleck's The Town. There was something different about them, a richness (not to mention a scale) that separated them from the four million other ads plastered all over the streets and down in the subway platforms. After a little research, we found out they were all done by Sky High Murals, a group of extremely talented artists who work for a company called Colossal Media, and they were, in fact, hand painted and photorealistic, completed over the course of days. In a world of ubiquitous advertising, from pop-up ads on your computer to inserts that fall out of magazines you already have subscriptions to, Colossal's slow, thoughtful, beautiful murals feel less like ads and more like art.

After months of trying to arrange it, Colossal finally allowed our film crew to join Sky High Murals for a few days to film them at work. In the coming weeks, we'll be shooting the life cycle of a huge mural for an upcoming Warner Bros. movie, but for now, here's a little taste of what Sky High Murals does, and how in the advertising capital of the world, they've managed to create work that Don Draper himself would appreciate.