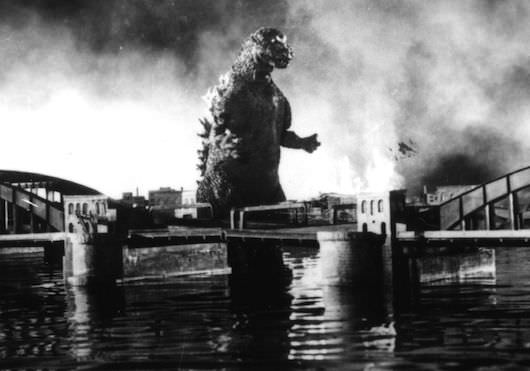 Looking Back at the Original Godzilla

That film was, of course, the original Godzilla, made by a nearly rebuilt Japan still rocked by Hiroshima and Nagasaki, in the midst of the Cold War and the escalating conflict in Korea.

As director Gareth Edwards said about the latest iteration of the iconic monster coming out this Friday, May 16, the original film served as a major touchstone for the filmmakers. There have been so many versions of Godzilla that they’ve been broken up into three eras,  Showa (1954-1975), Hesei (1984-1995), and Millennium (1999 – 2004), accounting for some 28 films.  An additional four American productions have been made, including Edwards current film and the 1998 Roland Emmerich version. There’s practically a Godzilla for every possible taste—the monster’s been good, bad, campy, and mechanized, has fought foes from Megalon to King Ghidorah to SpaceGodzilla, and has even had an island retreat he shared with every colossal monster including Mothra, Roand and Gorosaurus.

Yet it’s that original Godzilla from director Ishiro Honda that most clearly represents the tone and tenor Edwards and his team were going for; a monster-sized film about deeply human fears. In Honda’s era, Godzilla rampaging through Tokyo was an attempt to relate the horrifying experience of Hiroshima and Nagasaki on film. “While there is some truth in such interpretations, it may be impossible for non-Japanese to fully fathom what the filmmakers were trying to say,” says Steve Ryfle in his book “Japan’s Favorite Mon-Star.” And starting in 2004 for the 50th anniversary, and again this year, Rialto Pictures re-released the original Godzilla in a restored, uncut, un-dubbed and uncensored version.

There was something bigger at work on a subconscious level in that original Godzilla, Ryfle wrote, with the monster not only being created in the image of the Bomb, but his wrath being emblematic of numerous anxiety points, including the repercussions of what happens when man “foolishly unlocks the forbidden secrets of nature.”

Here’s a look back at a few interesting facts about the original Godzilla:

The Oceanic Monster was Born on a Plane

Ryfle notes that the apocryphal story about Godzilla’s origins involves producer Tomoyuki Tanaka with the Toho Motion Picture Co. flying home from a disastrous film production in Jakarta, Indonesia that had fallen apart. Tanaka was under pressure to come up with a replacement for the film, and so, as legend has it, he spent the entire flight in a panic of brainstorming.

Inspired by the American film The Beast from 20,000 Fathoms, that had been released in 1953, Tanaka struck upon the idea of creating Japan’s first cinematic monster, a creature that would rise up from the ocean, born of atomic folly and capable of atomic destruction. Even though Japan had more or less rebuilt itself into a prosperous nation by 1954, Cold War tensions and the Korean War had renewed fears of nuclear war.

Right around the time that Tanaka was thinking about his atomic monster, something horrific was happening in the real world…

Godzilla opens with a series of mysterious shipping disasters that are haunting Tokyo Bay. Fishing boats and freighters are destroyed, and authorities don’t know who is to blame and are therefore powerless to respond. This eerie opening is a reference to a real disaster that had rocked Japan, when the United States had tested a 15-megaton H-bomb (750 times more powerful than the bombs that destroyed Hiroshima and Nagasaki) near the Bikini Atoll. The explosion was far greater than they had anticipated, creating a massive plume of radioactive debris that floated eastward over an area of some 7,000 square-miles in the Pacific Ocean. Into this lethal cloud sailed the 140-ton Dai-go Fukuryu Maru (‘Lucky Dragon #5), a wooden Japanese Trawler fishing for tuna. Men onboard became sick, and eventually their chief radio operator died of Leukemia some six months later. The U.S. government initially denied culpability, then later accused the Lucky Dragon of entering the restricting testing area on a spy mission.

Out of this horror Godzilla's opening was crafted.

The atmosphere of Godzilla is thoroughly bleak, and is heightened by the grainy, documentary-like work of cinematographer Masao Tamai. The sense of anxiety and dread is helped by the fact that the film takes place in late summer, and the actors are often profusely sweating.

As the main attraction, there are of course many iconic shots of Godzilla throughout the film, but perhaps none is memorable as the scene in which he peers over the ridgeline on Odo Island and unleashes his terrific roar, a shot executed using in-the-camera matte and combining footage of actors running down the slope while a Godzilla puppet peers over a miniature mountain. When Godzilla departs, he leaves a trail of gigantic footprints that lead from the beach into the surf, another matte shot that fused footage of the ocean with a painting of the sand.

This composite photography work was crucial to the film’s visual style, especially in arguably the most celebrated sequence, when Godzilla lands on eastern Tokyo Bay and begins his assault on dry land. This is the first moment we see the monster in its fearsome totality, and for audiences in 1954 the shots that follow were breathtaking. There’s Godzilla, silhouetted against the night sky, towering above Tokyo as human beings, suddenly preposterously small and pathetic, flee in the foreground. The suit that Honda and his team had created was a thing of gruesome beauty, especially the dead eyes set beneath a scarred brow. His colossal size is helped made viscerally impactful by the low-angle camera placement and the use of fast edits between the live action footage and special effects. 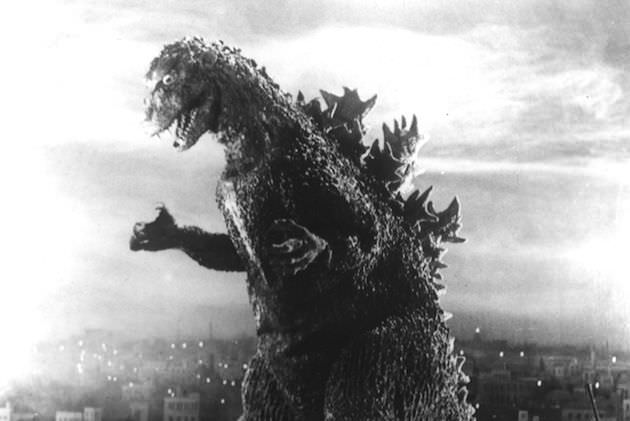 The Making of the Godzilla Suit

Sculptor Teizo Toshimitsu and art director Akira Watanabe began design work on Godzilla's look after initial designs by cartoonist Kazuyoshi Abe were discarded because of their vaguely humanoid look. Toshimitsu and Watanabe referred to dinosaur books, as well as an issue of Life magazine that featured an illustrated article on dinosaurs. They decided to base Godzilla on two upright-walking behemoths; the tyrannosaurus rex and the iguanodon (later, scientists would confirm the iguanodon actually walked on all fours). They also borrowed a distinctive feature of the stegosaurus: three rows of erect dorsal fins lining the spine, from neck to tail. Later, they decided that the fins would glow when Godzilla emits his radioactive breath. 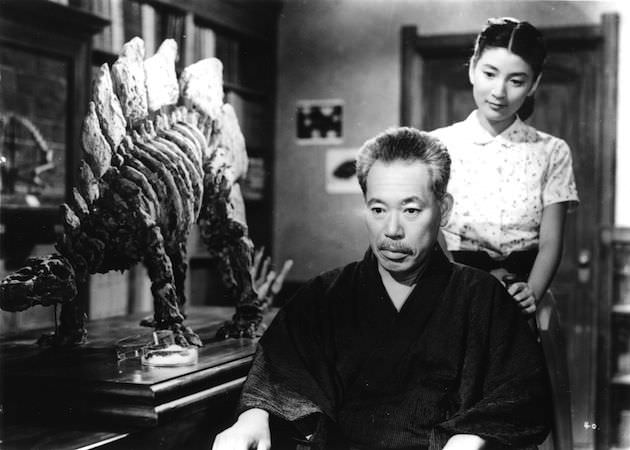 Toshimitsu sculpted a clay model of the Godzilla suit, which stood about 10 centimeters tall, with a large head, small hands and feet, and scales. This design was rejected, so Toshimitsu tried out a “warted Godzilla” whose body was covered with smooth, round bumps, creating a amphibious look. This was rejected, too, but Toshimitsu’s third design was the charm—a small head, short, thick arms, and a body covered with massive pleats, similar to alligator skin, representing the monster’s physical scarring by an atomic blast.

It was decided that Godzilla would stand about 165 feet tall, just high enough to peek above the tallest buildings in Tokyo at the time. Sculptor Toshimitsu and a team of costume builders went to created a costume that was to be about 6-1/2 feet tall, or 1/25 Godzilla’s actual height. They built a frame for the interior of the costume out of thin bamboo sticks and wire; over that, they applied metal mesh and cushioning to bolster its structure, and finally came the coats of latex. The men had to melt large chunks of raw latex and stir it by hand, covering the costume frame with it. Numerous coats of molten rubber were applied, and strips of latex were glued on to create Godzilla’s scaly hide.

That first Godzilla suit weighed over 220 pounds. The men chosen to wear this monstrous suit and portray Godzilla onscreen were Haruo Nakajima, a fit young actor and stuntman, and Katsumi Tezuka, a teenager. Both were adept at martial arts and were chosen for their strength and endurance.

The Toho Studios team considered the roars of many animals, including lions, tigers, and condors, playing them back at various speeds, but none of them seemed right. Eventually, the idea of using a contrabass (double bass) was struck upon, one of the lowest-pitched string musical instruments in existence. The filmmakers loosened the strings of a contrabass and rubbed them with a leather glove. They recorded the sound and then played it back at a reduced speed, and the result was pure Godzilla, that horrific, oddly sad wail that became one of the most memorable effects in the film.