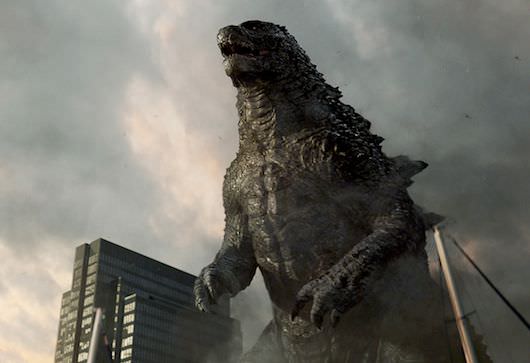 We combed through a few Godzilla round table interviews Warner Bros. recently uploaded to their press site in anticipation of the iconic monster's May 16 landfall, and have provided some choice quotes from three major players involved in the film—director Gareth Edwards, producer and Legendary Pictures Chairman and CEO Thomas Tull, and star Ken Watanabe. 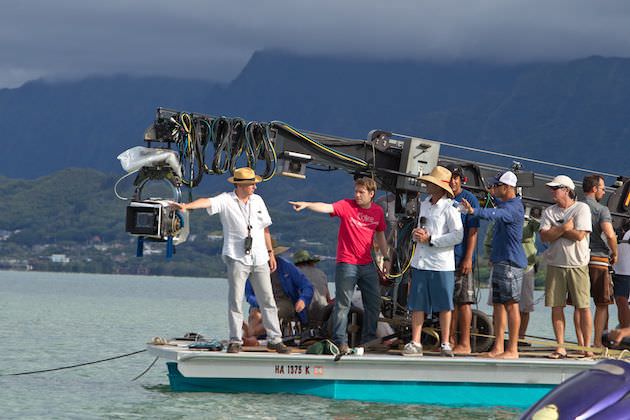 On creating the look of Godzilla

"We imagined that sixty years ago, Godzilla is a real animal, that he really exists and he’s in the ocean, and he came out sixty years ago and he was seen by people in Japan but no one took a picture. Everyone went running and screaming back to Toho Studios to describe Godzilla to the filmmakers. So they went off to make all the movies we know and love, and in our film, the idea is you’re going to get to see the original animal that they witnessed. So you should be able to correlate it and go, ‘Oh, I see from the description how they’d arrive at that guy in the suit,’ but that would give us a bit of license to bring it up to date and make it more realistic. The main thing I tried to do was refine the shapes and give him more aggressive lines in the face and a straighter, sharper silhouette so he feels a little more fierce."

"With every actor there was a hesitation about doing [Godzilla] because there’s a version of this film where they feel it could be…not a great movie. I feel like with a lot of actors you get the impression that they go, ‘Okay, I’m going to do a personal project and then I’m going to a commercial project.’ I said to everybody that you have to view this as your personal project, don’t be treating it like it’s some popcorn blockbuster. We need a performance that’s as strong as an Oscar-bait drama [Laughs], and they all responded to it really well. And when they read the screenplay and could see that there was emotion in there, and hopefully another layer to the film other than just a monster movie, they all jumped on board."

On deciding which city Godzilla would decimate

"When we talked about what the global journey of Godzilla is in the movie, I felt like the most relevant thing is it starts in Japan, and by the end of the movie he arrives in America. As soon as you do that, you’re looking at the Pacific coast, and I wanted a city that had a relationship with the ocean, and with the San Francisco bay and these iconic landmarks…versus Los Angeles, which would have been Godzilla stepping onto the beach and that would be that, San Francisco felt like the best playground, no offense to them [Laughs]. I think it’s an honor when Godzilla trashes your city."

"The main one we always talked about was the original, the 1954 black and white movie. For a lot of people who don’t know about Godzilla, or they grew up on some of the more child friendly versions, it’s a surprise to watch the original because it’s really a very serious metaphor for Hiroshima and Nagasaki. So that was our benchmark, but personally, they divide Godzilla movies into eras, and the Showa Era, which was the sixties, is the one that I like the most. I’ve got a high tolerance for science fiction from that period of time, and I just love things like Destroy All Monsters and monster island and having multiple creatures."

On the creation of the monsters

"It was mainly key frame animation. We initially looked at hundreds of clips of animal behavior, wildlife documentaries, and my first approach was going to be to just copy nature, and Godzilla was just going to be this animal. We looked at bears fighting, and all sorts of different things. And then we found the problem with that is when you just drop into the middle of a wildlife program and you watch two animals, you don’t know what the hell is going on, which is why they always narrate those things because it’s very confusing. Is he angry or scared? You just can’t tell. So we had to dial from slowly away from animals and more towards a human performance, which is why Andy [Serkis] got involved towards the end." 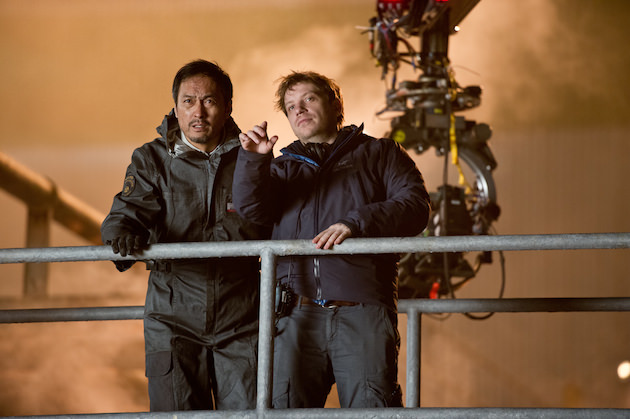 "When I met Gareth for the first time, he gave me a vision of this theme. This year marks the 60th anniversary of Godzilla. The original Godzilla was born after World War II in 1954 out of fear, the people were fascinated by nuclear weapons. In Japan we've had experiences, the collapse of a nuclear power plant due to an earthquake and tsunami, and even after sixty years we have the same fear. The people are still fascinated by Godzilla, and after all these years the people still have a fear that things that terrify us have not changed. It’s really interesting, we also have the same curiosity. As an actor I wanted to join this project."

Whenever I heard his roar, it’s a long roar, a screaming, and to me it almost feels like Godzilla is scolding us for humanity’s foolishness. It’s like Godzilla exists as a symbol of human consciousness. It’s a really strong scream, and a scream involved with sadness."

On working with Sally Hawkins and Bryan Cranston.

"She’s so great. She’s always working in great independent films, so this might be her first big studio film. She was so creative and smart. For Bryan, he doesn’t act like ‘I’m a huge actor,’ or something. He’s very generous and kindly and very friendly. We were so enjoying each other."

On Gareth Edwards as director

"One of the things that was really important to us was to have a fresh perspective and a fresh voice. I saw Monsters and was blown away by it. He did it literally for no money, so I wanted to meet him. We brought him in and we spent a lot of time talking together, and he was not only a fan, but had some very unique thoughts about different scenes, we talked about the halo jump that he had in his head, and he was the first and only choice. I heard a lot of questions and skepticism, certainly at the beginning, but he’s going to have a phenomenal career. He’s a great filmmaker."

On what Legendary is building as their studio brand

"We make stuff that we want to see, and a lot of that has been Batman, Superman, Godzilla, Pacific Rim, but also The Town and 42 and movies like that. We want to make things that are commercial but elevated. It’s a privilege to do this, that’s the other thing, I feel like we’re getting away with something sometimes. So our plans are just to continue to make things that we really want to see as fans. There’s a movie coming out called As Above, So Below that I think is really going to blow people away."  (Watch the terrifying trailer here.)

On leaving room to build a sequel, and perhaps a franchise.

"Our thought process was, and we have another rule, we never talk about the s-word until the movie comes out. The problem with that, I think, especially with reintroducing something new, is if you lay out a roadmap and look too far into the future, sometimes you can blur your vision for what’s sitting right in front of you. We wanted to be absolutely sure we got this right. It was really important to say, ‘Right here, right now, this better be great,’ because with a Godzilla movie, if you’re a little bit too far left or right, and you fall off the bridge it’s a long way down."

"One of the things that’s really hard, believe it or not, is where does he come from? Where was he? What’s he been doing? In this age of Google Maps, you can’t just be like, ‘Oh there was this farm, and he was behind this stack of…’ So we wanted to make sure we got it right, and not be overly somber, but making sure we had plausible ideas. I’m on the board of the San Diego Zoo, so I used those resources, and we had our folks look into echolocation and how those things work. Like anything, you go through a lot of ideas until you dial in on one, but I can’t really call it work to sit around and debate the origins of Godzilla. It’s a pretty cool day at work."

On seeing it for the first time

"Once it’s mixed, I usually try to let a couple of weeks go by and cleanse the pallet, so the first time I saw it fully mixed and rendered, I was incredibly proud and got goose bumps. I don’t know how it’ll do or anything, but it’s the movie we wanted to make, and that’s all you can do in this business in the end of the day. It was incredibly gratifying."