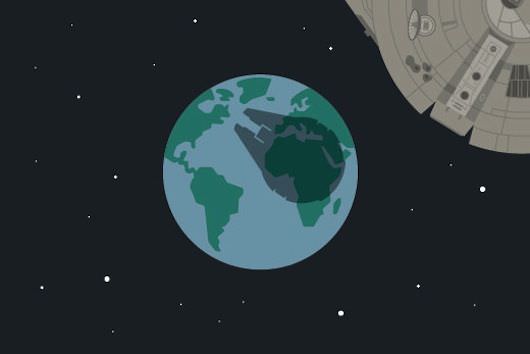 May the Force be with you all, especially this Sunday, May 4th, a date otherwise known as International Star Wars Day.

I know what you’re saying: isn’t every day international Star Wars day? Well, yes. And never more so than now, when after weeks of rumors, J.J. Abrams’ cast for Episode VII has just been announced.

The epic trilogy (and the prequels, and expanded universe) have left a mark on pop culture like no other, from Family Guy’s hour-long parody to a staggering number of blink-and-you-‘ll-miss-it references in TV shows and other films. Marshall on How I Met Your Mother probably expressed it best when he said, “The only people in the universe who haven’t seen Star Wars are the characters in Star Wars and that’s because they lived them. That’s because they lived the Star Wars.”

However, there is a legitimate (or legitamitely groan-worthy) reason to celebrate on this day in particular. The tradition traces its roots back to 1979, when the Conservative Party, following Margaret Thatcher’s election to Prime Minister, placed an ad in The London Evening News that read “May the Fourth be with you, Maggie, Congratulations.” Because it was May 4th, 1979.

So it’s official: Star Wars is everywhere. And to prove it further, here are just of few the unlikely places that Jedi knights and Sith lords have ended up.

Flashback to March 2013, the heat of the sequester crisis, the president struggling to reconcile two parties in gridlock and the fate of the world’s largest economy in the balance. Speaking extemporaneously at a press conference, Obama stated, “Even though most people agree I’m presenting a fair deal, the fact that they don’t take it means that I should somehow do a Jedi mind meld with these folks and convince them to do what’s right.”

Whether he meant to say Jedi mind trick or Vulcan mind meld, confusing Star Wars and Star Trek is like the textbook sci-fi faux pas. Cue righteous indignation from fans of both franchises, plus a Twitter hashtag (#ObamaSciFiQuotes) mocking the would-be Nerd-in-chief. Obama actually rolled with it fairly well, and the White House tweeted this gem in response. 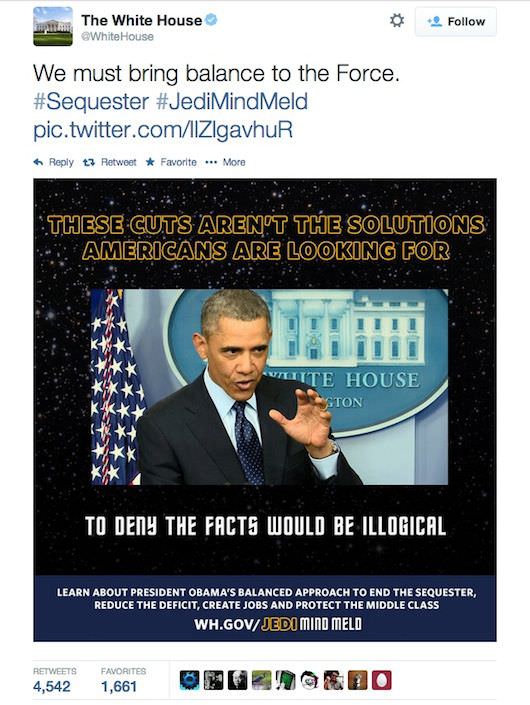 Though it turns out the Jedi Meld is a real thing, so maybe the Force is strong with this president after all.

Apparently all the boring animal names are already taken, because contemporary biologists are really going to town with new discoveries. Aptostichus stephencolberti and Nepenthes attenboroughii are just two on a long list of species named after celebrities.

Scientists also tend to like science fiction (breaking news, I know), so inevitably, there are a bunch of animals named after Star Wars characters. None of them are as flashy as giant snow kangaroos or living teddy bears, but hey, this deep-sea acorn worm totally looks like Yoda.

The Yoda purpurata, discovered in 2012, joins the ranks of the wasp Polemistus chewbacca, a beetle and a mite named after Darth Vader, and a trilobite named after Hans Solo on a dare.

First of all, the Star Wars score is so epic that it gets its own touring multimedia extravaganza, “Star Wars: In Concert.” And by “extravaganza” we mean music from the score performed by a symphony orchestra and chorus, footage from all six movies on a three-story-tall screen, narration by C-3PO’s actor, a laser show, and an amphitheater packed with 20,000 fans for the first performance.

Then there are a bunch of bands named for various Star Wars references. Two you might have heard of are RjD2 and Nerf Herder, the geeky pop punk group whose claim to fame was providing the music for the opening credits of Buffy the Vampire Slayer. (Not that I should have to tell you this but “nerf herder” is part of an insult that Princess Leia hurls at Han Solo in The Empire Strikes Back. A nerf is basically a fat space buffalo.)

And Tiësto remixed the soundtrack, because of course he did.

“390,000 Jedi there are,” the Office for National Statistics reported after the 2001 UK census. The surge in piety was due to a grassroots campaign that urged people to write in “Jedi” for their religion. And whether as an act of political protest, or for the love of Star Wars, or as a joke, the people answered the call, hundreds of thousands of them across the English-speaking world.

That’s so many people that the ONS had to assign it its own code (896) for processing. At nearly 0.8% of the population, it surpassed Sikhism, Judaism and Buddhism to be the fourth largest reported religion in the UK. Census officials clarified that this did not mean the Jedi faith would receive official status, as the internet campaign had claimed, but they speculated that it might have helped the census overall by encouraging young people to complete their forms.

Alarmingly, that number has dropped 50% over the last 10 years, but with 176,632 followers in the UK’s 2012 census, there are still more Jedi knights than followers of any religion other than Christianity, Islam, Hinduism, Sikhism, Judaism or Buddhism.

N.B.: The census phenomenon is not to be confused with “Jediism,” which is apparently a real thing.

Meanwhile on the internet, Worth 1000 held a Star Wars fine art Photoshop contest in 2008, with a lofty goal to “rectify the art world’s mistake by placing Star Wars character, items, vehicles and scenes into classic art works.” Unfortunately the full gallery seems to have been taken down, but General Grievous Crossing the Alps and Admiration with Yoda are on permanent display on Geekadelphia.

Star Wars has inspired a lot of books, from novelizations to philosophy texts, but the trilogy itself is partially based on a book: The Hero With a Thousand Faces, a seminal work of Jungian comparative mythology by Joseph Campbell. Campbell argues that all important myths follow the same basic pattern, which he calls the “monomyth.” His theory really is a “once seen can’t be unseen” sort of a deal, so sorry if this ruins every epic story ever for you.

Campbell outlines 17 stages of the “hero’s journey,” during which the archetypal hero receives a call to leave home, embarks into the unknown, faces challenges along with various mentors and helpers, descends into death or some other spirit realm, emerges reborn and goes back home. The entire schema is incredibly detailed, but also incredibly easy to apply to the stories of Odysseus, Jesus, Gautama Buddha, Dante in the Inferno, Simba in The Lion King, Harry Potter… and Luke Skywalker.

George Lucas was two drafts into writing the first Star Wars movie when he rediscovered Campbell’s work, and from then on he deliberately structured the film to align with the monomyth.

The influence goes both ways. In 1988, Joseph Campbell and journalist Bill Moyers wrote and produced The Power of Myth, a six-part TV documentary about comparative mythology. Most of the interviews in the series were filmed at George Lucas’ Skywalker Ranch, and naturally the first episode includes a discussion of Star Wars as a metaphor for the hero’s journey. Coming full circle, one popular post-1977 reprint of The Hero With a Thousand Faces shows Mark Hamill as Luke Skywalker on the cover.

Don’t worry, not that long ago and in our very own galaxy there was once a Star Wars ballet.