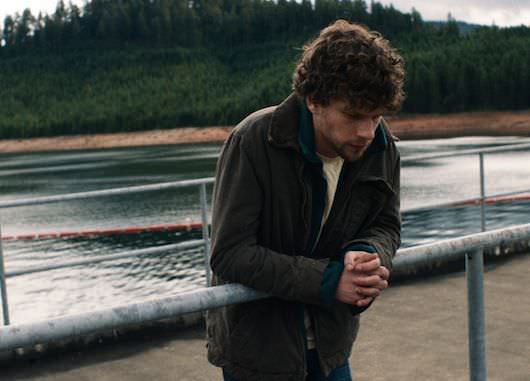 A group of environmental activists watch a somber film about the slaughter of the planet. A woman’s voice narrates the horrors of mankind's insatiable greed—eroding beaches, melting ice caps, deforestation, and carbon emissions to name a few of our sins, with a call to action as well. "Let the revolution begin…for the future, for the people, and for the planet."

This film-within-the-film ends to a smattering of clapping. The filmmaker is present, and she's asked to answer questions from the group. A young woman raises her hand and asks the filmmaker whether, aside from pointing out all that’s wrong with we're doing to the planet, she has a plan to do something about it? "I have no big plans," she says, "only lots of small plans." We are only a few minutes into Kelly Reichardt’s somber, tense film, but already we sense that our protagonists Josh (Jesse Eisenberg) and Dena (Dakota Fanning), who are also in the audience, disagree with this filmmaker’s approach to fighting back against the forces that are destroying our planet. They have plans, and they are very big indeed. 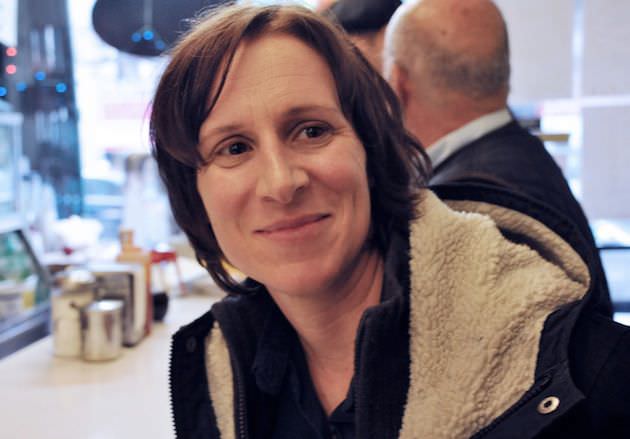 With minimal set up and exposition, Josh and Dena’s plan is craftily evinced through Reichardt’s sure grasp on her story. The first image is of Josh looking down at a massive hydro-electric dam in Oregon. We get a brief glimpse of Dena and Josh’s life—she works a job a faux-Asian day spa with healing baths and classic Enya-style relaxation music, he lives and works at an agricultural commune—and we hear the barest outline of a plan. When they share a tense ride to buy a boat from a rich suburban man, in cash, you can guess what these two might be up to even if you haven’t read a synopsis of the film. When they drive to see a friend of Josh’s, the ex-Marine Harmon (Peter Sarsgaard), who lives in a trailer in the woods and supplies them with fake IDs, our suspicions are quickly confirmed; their big plan is to detonate their fertilizer filled boat and take down that dam.

The first hour of the film is a steady build to this violent act. Reichardt and her longtime writing partner Jonathan Raymond waste almost no time putting environmental rhetoric in the mouths of their characters. There are a few stray asides that give us more than enough to know how these people feel about the world they live in (the dam kills salmon so that people can 'run their iPods all day long', the marine biodiversity of the planet is on the precipice of a mass extinction), but because we're joining them well into their plan, and they are comrades, they don't need to convince each other about their reasons and so we are spared, too.

This hour drops us down into the details that need to be ironed out, and the opportunities they have to reconsider what is they're doing. The first hiccup is that they might not have enough ammonium nitrate fertilizer to create a explosion capable of bringing down the dam, and it’s up to Dena, the least sketchy looking of the group, to convince a supplier to sell her five-hundred-pounds of the stuff without arousing suspicion (their plan is the very reason there's typically a ten-pound limit on purchases of the stuff.)

Throughout the plotting of their conspiracy, Josh is cold, even cruel, to Dena. She is a rich girl from Connecticut, and no matter how crucial she is to the execution of their plan (it’s Dena who pays for the boat, it’s Deena who brilliantly works over the fertilizer supplier), he speaks down to her, questions her commitment, and in general offers none of the solidarity one would expect in such a high risk enterprise. Reichardt is not interested in giving you a protagonist in Josh you necessarily want to root for. In Dena and Harmon, you have two more ‘relatable’ characters, but ‘relatable’ is goal beneath Reichardt’s talents and convictions. She doesn't need to give them righteous speeches about mankind's butchering of the planet and she doesn't need to make them personally dynamic or even well reasoned—the portrait Reichardt paints feels more real, and therefore is more engrossing, than any polemic against the oil industry or finger wagging against foolish tree-huggers could possibly be. It almost has the relentless death spiral feel that the Coen Brothers masterful Fargo created, only instead of a crime for money creating a series of increasingly complex and bleak scenarios, this is a crime borne of righteous fury.

The film is at turns lushly beautiful (working with cinematographer Christopher Blauvelt again, Josh’s agricultural commune looks like Eden, which is not far from how much of Oregon looks) and incredibly claustrophobic. Although surrounded by seemingly like-minded individuals living peaceably, if not a little begrudgingly, against the institutions that fills them with such despair, Josh, Dena and Harmon have worked themselves into a tight little corner of troubling decisions and very little camaraderie. When it’s finally time to execute their plan, there are several clear signals they might want to reconsider, but our trio literally and figuratively motors ahead. The scenes at the Lake of the Shore, as they move closer to the dam, are breathtakingly tense.

The film’s third act, roughly a half hour, deals with the results of their actions. Having freed her film of environmental proselytizing in the first hour, we’re also spared any glorious sense of achievement now that the deed’s been done. Instead, we’re placed inside the panicky, morose orbit of Josh as he tries to manage the fallout of their actions, both the moral implications and the effect it’s had on Dena.

Reichardt’s nervy film never really lets you breathe easy, and from the first shot to the last you’re aware there’s a reckoning coming.  Without creating easy to love protagonists or easy to hate antagonists, the film is centered on brutal but undeniable causality.  What we do to the planet, as well as what we do to others and ourselves, has ramifications that link together, one after another, that feel both bigger than us but somehow potentially alterable. Josh, Dena and Harmon try to disrupt the chain of events that they see destroying the planets and wake people up from their complicity in their own thoughtless actions, but it's the ramifications of their own actions they haven't thought hard enough about.