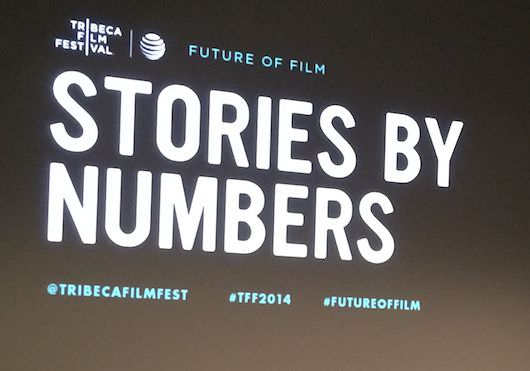 We all know that our shopping habits are fodder for various entities looking to target their advertising and increase their profits, but the same kind of Big Data is being used by media and entertainment entities, from HBO and Netflix to the New York Times and Fox News, to figure out who we are, what we read and watch, and what, perhaps, we want next. "Does betting on the ‘wisdom of crowds’ bode well or ill for future innovation in film, art and journalism?" This is the question that was put to the Tribeca Film Festival's panel during the last day of their Future of Film week, which consisted of The Wire and Tremé creator David Simon, House of Cards creator Beau Willimon, influential Indiewire writer Anne Thompson, and statistician, author and journalist Nate Silver. Moderated by reporter and host of NPR's The Takeaway,John Hockenberry, the panel might have veered slightly from this original question, but it was never less than fascinating.

"When you’re reading a really good book, how often do you think, ‘just one more chapter?’" Hockenberry asked at the beginning of the session. This phenomenon of ‘binging’ on entertainment, he explained, has existed for a long time, and watching the entire season of House of Cards is not so different from reading a huge chunk of a book you love.

When asked by Hockenberry how much of their writing is based on instinct and how much is based on their response to certain data sets (say, that viewers love dark cop procedurals, or some key demographic enjoys political thrillers), the show creators were, unsurprisingly, adamant that any kind of ‘metrics’ or specific data were either unknown or unwelcome.

“Netflix guards that data, and I’m glad they do,” said Willimon, who said trying to write his show based on viewer data would be pandering to his audience. He did admit, however, to occasionally looking at those people who gave House of Cards only one or two stars on the site, and tried to find any consistent theme to their critiques, like a certain story point being unclear.

Simon said the only time he considers any data is when he’s thinking about the particulars of his own story. For The Wire, that might be, ‘Why is Baltimore such a dangerous city?' How violent is it? Who’s getting killed? Why?’ “I have absolutely no interest in what the audience thinks,” he said. Simon says the job of the writer is to serve the story and the characters within it. Looking over your shoulder at the audience, reacting to what they want, would be to engage in juvenile television, the type that exists primarily to sell whatever the advertiser's are pitching during the commercial breaks. Because The Wire was on HBO, he didn't have to deal with pleasing advertisers, only fans. And fans wanted more Omar, more Stringer (the popular characters portrayed by Michael K. Williams and Idris Elba respectively), but Simon, a former longtime journalist for The Baltimore Sun, was never interested in giving them what they thought they wanted.

Willimon concurred, saying that the creative act is “deeply selfish.” "It's sophomoric if you’re trying to reach people when you write a story, because what you’re really doing is talking to yourself."

Silver said that what he tries to do with the data he uncovers is look for the big picture stuff. What he’s found with his FiveThirtyEight blog is that the stories that do well are either very topical (breaking news) or not timely at all (deeper dives on something not necessarily in the news). Mixing the two, something relatively timely and relatively nuanced, doesn’t do well. The responsibility of journalists when dealing with Big Data, he said, was to be representative in their reporting. He cited something he noticed during the 2012 election, when, for example, 19 of 20 districts in a given state would be voting for Obama, but a story would be written about that one district voting for Romney as if it represented something bigger than it actually did. “It’s practically a lie,” he said.

Anne Thompson admitted to having to be cognizant of what gets clicks. The Big Data that Indieware has access to is how many people are reading her particular stories, but she said that if she were to blithely chase those clicks, say, write excessively about Twilight and Robert Pattison when it wasn’t actually relevant, her readers would punish her for it.

Yet Willimon did find a facet of Big Data intriguing—how it can reveal the irrational nature of human beings. “A lot of bad writing focuses too much on casuality,” he said, “more often than not, we don’t know why we do what we do.” He mentioned a habit of Chekhov’s, in which the great Russian writer would have a character do something that had absolutely nothing to do with the story, save for the fact that human beings do things that make little sense all the time. The example he used is a character in a Chekhov story walking into a room, making a weird sound, and walking out for no reason.

Simon took on the role of moderator and asked the panel, and the audience at large, what he clearly felt was a rhetorical question—what do audiences want? “Violence and sex,” he said. “I didn’t care what my readers' presuppositions were when I was a journalist—that’s why we have MSNBC and Fox,” he said to laughter. Simon compared a television audience to children coming to a dinner table refusing the vegetables and demanding the ice cream at the end of the meal, drawing a corollary between those children and fans of The Wire craving more Omar.

When discussing the notion of binge watching versus the episodic viewing that had dominated television for much of its history, Willimon said that ever since box sets were available, viewers could always binge watch, as he did with The Wire. “I watched three seasons in about a week and a half,” he said. “When I was writing House of Cards, we knew releasing it all at once was a possibility but not an inevitability—we were liberated when we got 26-hours to work with.”

Willimon explained that none of the principals in House of Cards, including himself, had ever really worked in TV—that included director and executive producer David Fincher and stars Kevin Spacey and Robin Wright, and they were reluctant to sink all of their energy into a single pilot, as would have been the request from HBO, Showtime or FX. “Then Netflix came in and said, ‘We’re in the content business, here’s two seasons.’” Willimon had to play it cool, as if this wasn’t the absolute dream scenario for he and his team. Whether or not fans would watch it all at once or not wasn't nearly as important to him as the ability to write the story as he saw it, without fear of having to respond to "hamster data," as Hockenberry put it, the episode-by-episode data on what viewers liked or didn't like.

Despite having made arguably the greatest television series ever, Simon didn’t sound like he was joking when he said that in the 110 hours of television he’s been personally responsible for (The Wire and Tremé), what he’s doing “still doesn’t work.” The Big Data he was dealing with at the time, the ratings for The Wire, were never good, but because HBO was new to the original programming world, and because no advertisers needed to be appeased, the show was given time and ended up becoming a critical smash and master class in storytelling, ushering in, along with fellow HBO darling The Sopranos, the breathlessly repeated ‘golden era’ of television. What The Wire lacked in ratings it made up for in buzz, countless glowing (and fawning) reviews and essays in major publications, all of which equaled major cachet for HBO.

If You Can't Predict What Viewers Want, How Do you Sell Your Idea?

So how did Simon and Willimon manage to create these critical darlings, and, in Willimon’s case, a ratings jugernauts? What was, for lack of a better of word, their 'secret' in getting executives to sign onto their very personal projects?

“People don’t know what they want until you give it to them,” Willimon said. There is no secret formula, no way to gauge what the public wants, because by doing that you’re already behind.

“Statistics are often just history,” Silver said. “They don’t predict the future when you don’t understand the causality of why they happened.”

Simon clearly enjoyed his experience with HBO when original programming on cable was nascent and he was left alone to create what would be, up to now, his masterpiece. “The only way an HBO executive would have landed on the set of The Wire and given us notes would have been if his plane crashed on the way to Paris.”

So whatever uses 'Big Data' has—predicting spending habits or elections, analyzing crime statistics or viewing habits—the storytellers are still required to sit down over a blank page and create something, and no amount of data will do that for you.