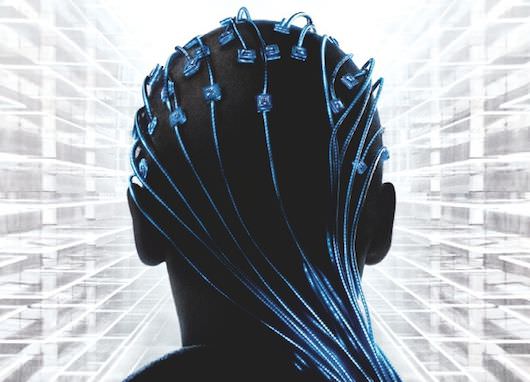 What is every budding screenwriter’s dream? How about having your screenplay land on the coveted Black List in 2012 (a selection of the best un-produced scripts in Hollywood) and, a scant two years later, premiere on the big screen with Johnny Depp, Morgan Freeman, Rebecca Hall and Paul Bettany as your stars, and serve as the directorial debut for one of the most gifted cinematographer’s of his generation, Wally Pfister. This is the reality for Jack Paglen, whose script for Transcendence found its way into the hands of the first time director and, eventually, up onto the big screen for tomorrow’s wide release.

“Wally had always been a hero of mine,” Paglen says. “His movies with Christopher Nolan are phenomenal in my opinion, and he was represented by my agency, ICM Partners, so with my enthusiastic blessing, they gave it to him.” 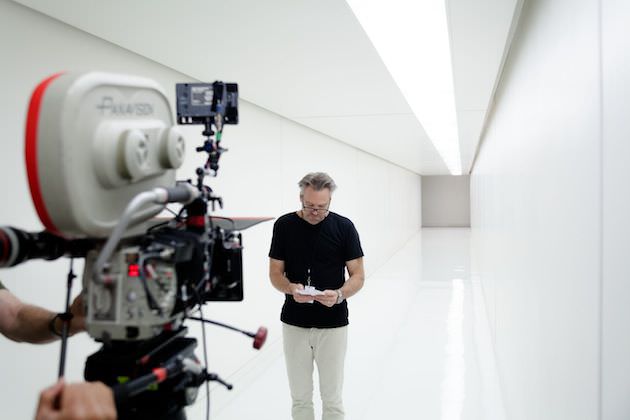 Transcendence delves into the realm of artificial intelligence, one of science fiction’s richest, and most well trod, subjects. You can’t write an article about A.I. without mentioning HAL, Stanley Kubrick’s mild mannered, murderous sentient operating system from his groundbreaking film 2001: A Space Odyssey. So we’ve got that covered. The list of films and books that deal with the notion of the Singularity (the moment when machines, essentially, wake up) is a long one, and they often frame this event in techno-horror terms. From the nefarious, world domination-desiring Skynet intelligence system in The Terminator, to the militant machinations of the helper-turned-master automatons in I, Robot, the idea of freely thinking machines has long been a topic of fascination and fear for writers and filmmakers alike.

For Dr. Will Caster (Johnny Depp), the world’s leading A.I. researcher in Transcendence, the notion of an approaching Singularity isn’t one to fear but to harness, and along with his wife Evelyn (Rebecca Hall) and their friend and collaborator Dr. Max Waters (Paul Bettany), they hope to usher in this possibility for the betterment of mankind. Caster has created a nearly sentient computer called PINN (Physically Independent Neural Network), which he, Evelyn and Max designed to process history’s collective knowledge and, eventually, marry it with a conscious mind.

“It started with conversations with my wife, who’s a computer scientist,” Paglen says. “She was working on a natural language processor [a major hurdle any machine must surpass in order to achieve anything near a functioning A.I.], and I had the privilege of hanging out with all of her intelligent friends.”

Unfortunately for Paglen’s protagonist, not everybody sees it this way, and just a few minutes into the film Will takes a radioactive bullet in the gut from an assassin representing the group RIFT (Revolutionary Independence From Technology), and his dreams of leading the world into a future of limitless possibility thanks to intelligent technology is now gone.

What Paglen began wondering about is what might happen if instead of simply creating a sentient machine, a human being uploaded his or her consciousness into a machine instead. Although he’d never written any science fiction before (“previous to this I’d stayed in the sandbox of dark, indie minded comedies,” he says), he kept this idea in the back of his mind for several years. Then his friend Annie Marter called him (one of Transcendence’s producers), asking him about the Singularity. “That’s when I started working on it in earnest.”

So Will’s wasting away thanks to that radiation-laced bullet—all his research, all those years of work, mean nothing to him in the face of his impending death. He simply wants to spend time with Evelyn, but his wife has a different idea. Enlisting the help of Max, she convinces both her husband and her worried partner that the only way to save Will is by uploading his mind into PINN.

“It’s theorized that consciousness is a pattern of electrical signals in the mind,” Paglen says, “and the idea is if you could map it, replicate it, and make an artificial process of that, then that brain could be uploaded, duplicated, and artificially sustained.” 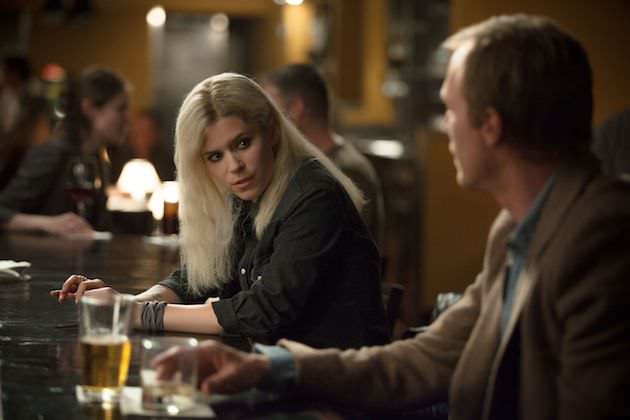 So this is what Evelyn and Max do, with RIFT agents, led by the nervy, dangerous Bree (Kate Mara) breathing down their necks. They manage to get Will’s mind mapped and uploaded more or less right as he dies.

And then nothing. It seems their experiment has failed. In one of the most chilling shots of the film, Evelyn and Max turn off the makeshift PINN-Will they’ve created, but right as the screens go dark you see a flash of text in the jumble of code that seems to read ‘Are you there?’ Sure enough, Will, or an eerie silicon simulacrum of him, now exists as a non-physical entity.

“Now, it may be the case that consciousness could then expand into the Internet, and use all of the processing power connected to the Internet to grow its intelligence by many, many times,” Paglen says. “That’s really where he becomes immortal.”

Without giving too much of the film away, Will, or whatever you believe the entity calling itself Will to be, is now a consciousness that is both nowhere and everywhere in the film, and this entity eventually tests these notions that Paglen wondered about for years. While the film ponders the question of what it is, exactly, that makes us human, it’s also very much a love story between a man and a woman, one of whom just happens to be post-human. 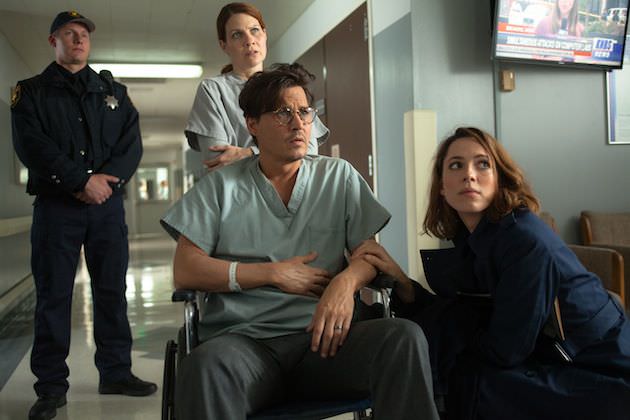 “The most important thing for me was relationship between Will and Evelyn,” Paglen says, “the tech and sci-fi elements are important, but it was a decision very early to make all that a backdrop behind this love story about a woman trying to love her husband as he’s becoming less and less human.”

This is the question that Evelyn struggles with throughout the film—is this my husband? She seems to be the only one who still believes that an element, or perhaps an essence, of the old Will remains. Paglen plays with our expectations—this new omniscient Will, the literal God in the machine, seems to be nothing like the one we meet in the flesh at the outset of the film.

“Ultimately the real question of the movie, given the possibility of this phenomenon happening in the future…the realization or invention of a ‘God’ that is inhuman, is how do we as a society to continue to retain our humanity in the face of something so inhuman?” Paglen asks. “Every character in the movie is really tested in that way.” 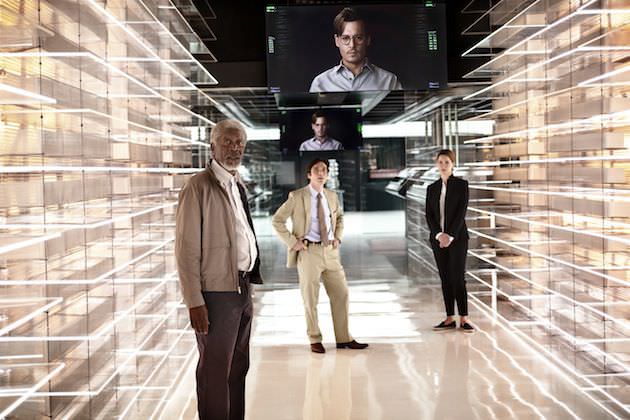 At one point, Will’s power grows so exponentially he’s able to manipulate, and heal, organic matter. When I asked Paglen what his thinking behind this was, he said that it was rooted in the idea that this new entity calling itself Will is continually, second-by-second, evolving it’s intelligence. “As Arthur C. Clarke said, ‘Any sufficiently advanced technology is indistinguishable from magic.’"

A movie with this many moving parts and big ideas required Paglen to get scientific with his writing process. “I did it all— whiteboard, index card, many drafts,” he says.  “I drafted for every character, because I was playing with this idea that there’s no real good guys or bad guys, just shifting points of view.” Paglen wrote his script as if everyone were the protagonist, asking himself over and over again, ‘If I were this character, what would I plausibly do?’

Paglen’s own story, the one in which his first produced feature length script attracts the attention of some of the biggest stars in film, is just beginning. For his next act, he’s adapting one of the most beloved science fiction series of all time for Universal—a little show called Battlestar Gallactica.