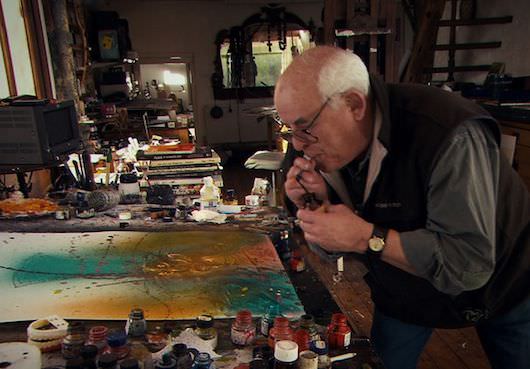 The Animal Collective frontman has made no official statements regarding Steadman’s art, but regarding psychedelia he says, “it's always been about the combination of moods and how fast a mood can change. I think combining humor alongside something extremely dark is always appealing in the world of psychedelia.” He could just as easily be describing the gonzo cartoonist’s style, where exuberant satire blends with slapstick nightmare, and a single glance registers extreme humor and horror.

Steadman’s life is the focus of the documentary For No Good Reason, which opened in the US on April 25th. It is the first documentary by painter and commercial director Charles Paul, who has spent fifteen years working on it, ever since Steadman agreed to install a camera in his studio. Johnny Depp, who shares with Steadman a deep connection to gonzo journalist Hunter S. Thompson, drops in on the artist and his interlocution frames the film.

Ralph Steadman has put his pen to work on projects ranging from Animal Farm to Flying Dog beer. Yet no matter the context, his maniacal, ink-splatter style is instantly recognizable.

Born in England in 1936, when he was five his family fled to Wales to escape the Blitz. He moved to London in 1956, struggling to make ends meet as a cartoonist, until after three years of submissions and rejections, Punch hired him as a regular contributor. He came to America for the first time in 1970 to cover the Kentucky Derby, providing illustrations for an essay that Hunter S. Thompson was writing for Scanlan’s Weekly.

From Thompson’s account in “The Kentucky Derby Is Decadent and Depraved,” they seem to have recognized each other immediately as kindred spirits. Steadman said that in being paired with him, "I met up with the one man I needed to meet in the whole of America to work with." They shared a commitment to journalism that transcended mere reporting. In For No Good Reason, he explains that "the essence of gonzo journalism is when you go to cover a story but you don't cover the story, you become the story."

“Kentucky Derby” is a prime example of that. Yes, Thompson describes what happened at and around the 1970 Kentucky Derby, and yes, Steadman draws some horses and ladies in hats. But the essay is a trip through the cramped, boozy underbelly of Southern high society, which Thompson et co. slip into all too easily, and Steadman’s illustrations are as lurid and unsettling as a 3am fever dream. Not only do they expose the corruption beneath the pageantry, they revel in it.

Other authors end up with illustrators who become deeply ingrained in the popular conception of their books; it’s hard to think of Dante’s Divine Comedy without Gustave Doré’s etchings popping into mind, or Lewis Carroll without an image of Tenniel. (Though speaking of which, Steadman won the Francis Williams Book Illustration Award for his Alice in Wonderland.)

However, there are few who have had a lifelong relationship with their artist, and where the work of each seems so profoundly linked to the other’s. They were friends and collaborators for forty years, until Thompson’s suicide in 2005. Along with Fear and Loathing in Las Vegas and frequent pieces for Rolling Stone, their joint bibliography includes The Curse of Lono and Fear and Loathing on the Campaign Trail ’72. Together they charted the aftermath of 60’s counterculture, shedding light on the failure of dreams both hippie and American.

Steadman usually comes across as less wild than Thompson, certainly less drug-addled (apparently he only partook once, when Thompson gave him psilocybin mushrooms at America’s Cup and he wound up trying to spraypaint “f**k the pope” on the side of a yacht,) and self-destructive. At 77, he is hard at work on a second book of extinct bird cartoons. He rises early and follows a strict routine, the polar opposite of Thompson’s notorious breakfast ritual. He still holds the benign position of Rolling Stone’s gardening correspondent.

Of Thompson, Steadman told Rolling Stone that "He had a devil in him, and it excited the devil in me."

Nonetheless, several people who knew them both will assert that Steadman was crazier in his own way. Jann Wenner, co-founder of Rolling Stone, said of Steadman that "he was willing to say anything about anybody (and when) his moral sensibility was affronted he wouldn't stop … (and would go) beyond the limits of what was appropriate.''

This side of his personality is evident in Thompson’s first impression of him, when Steadman spends his time at the Derby sketching people and then handing them his unflattering drawings. Unsurprisingly (to everyone but the artist), this results in his being “regarded with fear and loathing by nearly everyone who’d seen or even heard about his work.”

The pair left larger-than-life impressions wherever they went. Johnny Depp reports that when he first met Hunter S. Thompson, sparks flew — literally. Bursting into a tavern where Depp was waiting, “in his left hand he had a three-foot cattle prod, and in his right hand a tazer.”

This was in 1998, when Depp was about to portray his alter ego in Terry Gilliam’s adaptation of Fear and Loathing In Las Vegas. Depp and Thompson became close friends and remained so for the last ten years of Thompson’s life. Depp lived in the author’s basement for a few months in preparation for Fear and Loathing, and Thompson himself shaved Depp’s head for the role. Finally, Depp paid for Thompson’s funeral, cremation cannon and all.

He hopes to adapt more of Thompson’s work for the screen, starting with The Curse of Lono. "I'd just keep playing Hunter,” he said in an interview with MovieLine. “There's a great comfort in it for me, because I get a great visit with my old friend who I miss dearly."

For now, he’ll have to make do with visiting Steadman in For No Good Reason. The title, by the way, is a line of Thompson’s. When Steadman asked why they were covering a particular story, Thompson would reply, “For no good reason, Ralph,” the only worthwhile reason to do anything