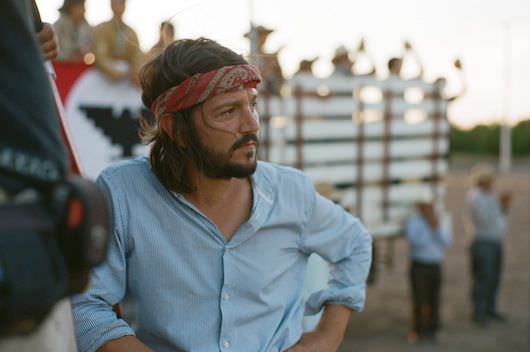 Directing his second feature, and his first in English, Mexican actor Diego Luna turned to one of the most admired figures in recent history: Mexican-American labor leader Cesar Chavez. In the 1960s Chavez co-founded the United Farm Workers, organized an historic grape boycott, and led a 300-mile march from Delano to Sacramento, California that drew global attention to the plight of migrant farm workers.

Michael Pena stars in the biopic that focusses on Chavez’s early years, when he left his organizing job and returned with his wife, Helen (America Ferrara) and eight children to the sprawling vineyards of Delano where both Cesar and Helen had worked as children. Cesar wanted to be among the men, women and children who toiled in the fields to give him more credibility as a labor organizer. At a time when fruit growers were staunchly opposed to anything remotely connected to labor unions, Chavez and Dolores Huerta (Rosario Dawson) in 1962 founded what became the UFW to help migrant workers secure better wagers and working conditions. A student of Gandhi and Martin Luther King Jr., Chavez’s non-violent tactics included a nationwide boycott of grapes that after five years led to a landmark contract between the vineyard owners and field workers.

Luna, at 34, is too young to remember Chavez’s impact in the 1960s, when Robert F. Kennedy, who would become a friend and champion, shared bread to break one of Chavez’s fasts to publicize the struggle. How did  he learn about him? “I remember as a kid seeing images of [Chavez’s] funeral [in 1993]; it was an amazing image of thousands of farm workers walking alongside [his casket] sending the message that he was just one among a movement. Later, when I was going back and forth between Mexico and California, my first son was born in Los Angeles. He’s a Mexican-American. I wanted my son to look at a film and see where he comes from. I was shocked to find out there had not been a movie about him.”

Although an internationally successful actor best known for the 2001 hit Y Tu Mama Tambien directed by friend and fellow Mexican Alfonso Cuarón, Luna says wanted only to direct and never considered playing the role himself. “I knew I couldn’t act and direct it. Directing takes way too much focus for me. Michael Pena was my first choice but we did an open call. There’s so few opportunities for Mexican actors so we got so much video; there was such a need for actor to be part of this. Rosario Dawson, I cast on the strength of her activism. Same with America. All the actors understood why this movie had to be made. Michael Pena’s experience is close to Chavez’s: he is first generation. It makes a difference when you [know what it’s like to] speak English in school then go home and speak Spanish with your family. He grew up with that duality.”

But few in Hollywood shared Luna’s passion for the project. Others tried over the years to get a Chavez film made without success, he says. Luna took a script by Keir Pearson (Hotel Rwanda) and Timothy J. Sexton (Children of Men), who’d secured the rights and cooperation from the Chavez family, to U.S. film studios and producers. “Many told us that the film needed to happen but they had no interest in investing. Other times, they wanted to know, ‘How can you make it more sexy and less risky? Can you get Antonio Banderas to play Chavez?’” says Luna.

So Luna headed back to his native Mexico where he found investors and produced the film through his own Canana Films, the company he founded with fellow actor and longtime friend Gael Garcia Bernal and producer Pablo Cruz. With a modest budget of $10 million,  Luna shot what he calls “an American story” in Sonora, home to nearly all of Mexico’s production of table grapes. “It was 117 degrees when we shot in the fields. You could look left and right and see real workers out there,” Luna recalls. “There’s no film industry in Sonora, so we needed [the pickers] to work as extras. The first day, there were hundreds of them. No makeup can substitute for faces that have actually been under the sun. It was easier to tell a farm worker how to act on film than tell an extra how to look and act like a farm worker. There is history in each one of those faces.”

Luna worked with another actor-turned-director, Kevin Costner, on Open Range in 2003, as well as other top directors during a career that began at age 12 with his first film in Mexico. Besides Costner and Cuarón, he’s made movies with Steven Spielberg (The Terminal) and Gus Van Sant (Milk). “They are all directors who enjoy the process…they like people to be part of the journey. Other directors don’t like it at all and want to run the race alone. I prefer the collaborative way — to be impressed by ideas that are not yours."

“Everything I learned as an actor had a lot to do with directing,” he continues. “But I didn’t think of it that way. I was just always curious about what happens [on a film]; a little too curious, maybe. Once when I was acting, a DP told me, ‘don’t try to help me so much.’ So I was always very aware of the work of everyone around me; as an actor, you get to see it all as the director is working. It’s a vulnerable, open and intense journey so you get to find out who the director is. There’s no way they can hide who they are if you are curious. I learned about listening and when it’s time to stop listening. I like finding out how much actors can surprise you but then knowing when it’s time to say, ‘OK.’”

Luna has been screening the film at universities, trying to engage with young people about labor, health and immigration issues that he says are the ongoing part of Chavez’s legacy. He knows he couldn’t tackle everything in Cesar Chavez so he hopes it leads to more films that put Latino and Mexican faces on the big screen. Chavez, he says, ‘was a complicated man. He loved jazz. He was a vegetarian. He read Gandhi. When people think of Mexicans, it’s with the bottle of tequila in one hand and the burrito in the other. Typical representations of this community fall into a stereotype. You can barely see the richness and complexity in films. There’s a few, but cinema is so expensive now it’s tough to find people willing to risk it,” he says. “But this country is changing and hopefully this film will show that it’s not a risk anymore but a necessity.”

His perseverance to get Cesar Chavez made, despite financing woes that continued through production, is an example of Chavez’s message that “change will never come unless we’re part of it.

“The message behind the [grape] boycott was non-violence and going straight to the consumer. It was mothers talking to mothers, parents talking to parents, making consumers understand that buying a grape supports child labor,” says Luna. “It’s indifference and ignorance that stops people from doing the right thing.”