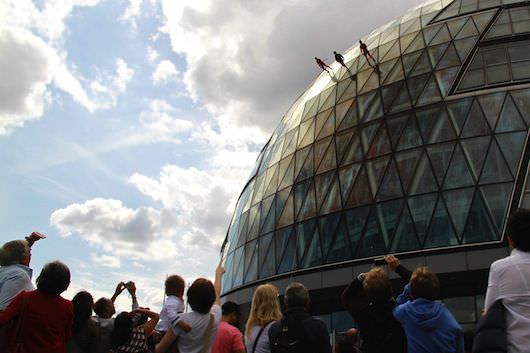 Dancers strut, cling, and leap from a giant swinging metal contraption. It looks like a massive mouse wheel, something you might see in a Cirque du Soleil performance or perhaps the circus. Despite the padding on the floor, the thing looks medieval and very, very dangerous, but the dancers atop, inside and below appear calm and in control. During one of the wheel’s rotations, a young man holding onto one of the bars appears to lose his grip, and as the heavy wheel swings down he’s brutally thrown onto the ground and into a block of padding. In a flash he rolls from the machine’s next pendulous swing, saving himself from further, and much more serious, injury. What is going on here?

These are Elizabeth Streb’s dancers, performing at the behest of a woman they deeply admire, a woman they would, it seems, do just about anything for. Streb, a MacArthur genius grant award winner, is a performer, choreographer and an icon of contemporary dance. Her dancers willingly defy gravity and tempt fate in performances of literal and figurative impact, flying, falling and slamming their bodies onto the ground, as well as into and through glass panes. Muscular, tattooed and pierced, Streb dancers are beautiful in way you will not see on any on stage or under any tent. Based on New York City, the company is made of young men and women, gay and straight, who take movements she has been working on for decades and perform them in front of audiences all over the world. And now director Catherine Gund has done a masterful job of introducing viewers to Streb, her dancers and her movement philosophy—the desire to fly, the beauty of that desire’s inevitable impact, and the fluid line between stunt and dance, between athletes and dancers.

Streb has the perfect collaborator in Gund, an Emmy-nominated producer, director and writer whose work has often focused on social justice, LGBT issues and the arts. Born to Fly tracks not only the arc of Streb’s groundbreaking career, but of her dancers, all of whom willingly, happily put their bodies at risk to perform movements that are as potentially dangerous as they are breathtaking. Take the performance that requires her dancers to continually duck beneath an eight-foot-long swinging steel I-beam at the last possible second. A conservative estimate of the spinning I-beam’s weight would be five hundred pounds. Streb is a thoughtful and exacting choreographer, asking her dancers to push themselves beyond pain, but not fear—there is no such thing as a fearless Streb performer, it wouldn’t be possible or advisable. Watching these powerful, nimble dancers duck out of the way of the swinging I-beam is both exhilarating and terrifying—a miscalculation of a half second could result in a gruesome injury. Watching this performance makes you feel almost like an accessory to a terrible accident that hasn’t yet occurred.

Streb sketches all of her performance pieces out in her sketchbook, which has been a part of her creative process for nearly four decades. Gund captures some of these blueprint-like images in Born to Fly, which highlight the artist’s commitment to pushing her work in new directions. She has been experimenting with dance since the early 1970s, when she performed in groups in San Francisco, including Molissa Fenley’s and Margaret Jenkins. When she returned to New York in 1975 (she was born in Rochester, NY), Streb created her dance company STREB/Ringside. She has been creating original, daring dance pieces ever since.

Gund follows Streb and her dancers through their grueling rehearsals. Imagine running full speed and flinging yourself at a a thick sheet plexiglass, or leaping from a spinning wheel twenty feet into the air to land, hard, on a mat below. Or ducking swinging concrete blocks. “My dancers and I see the rehearsal as a laboratory for testing scientific principles on the body," Streb has said. "We invent action ideas which we think are archetypal, noticeable, understandable. The outcome is a mixture of slam dancing, exquisite and amazing human flight and a wild action sport which captures kids, older people and the general public’s hearts and minds and bodies.” This is all true. Watching her dancers perform is a hybrid pleasure—they are athletes, dancers and daredevils all.

The documentary tracks Streb's career from her first foray in dancing to the opening of her newest studio in Williamsburg, Brooklyn. The film's highlight, however, is Streb bringing her company to London before the 2012 Summer Olympic Games. Here she stages perhaps her most incredible performances in a career filled with them. She has her dancers bungee jump from the Millennium Bridge and dangle from the colossal London Eye, the 443-foot tall ferris wheel on the bank of the Thames. This latter performance is truly awe-inspiring—Streb herself admits to shock at seeing what she has asked her company to do—they are tiny red blots against the huge structure, twirling and moving while harnessed to the wheel's metal spokes. It's terrifying and incredible.

Streb doesn't just ask her performers to put themselves to the test. At the age of 62, she took on one of the key performances in London, joining two men in her company and "walking" down the face of the glass face of City Hall (the main image of this piece). You watch in awe as she and her performers take their tentative steps down the glass facade, defying gravity, mastering their fear.

It's a thrilling coda to a fantastic documentary, and an introduction to an American artist relatively unknown outside of the modern dance world. Here's hoping this film helps bring this original performer, and her company, the attention they deserve.