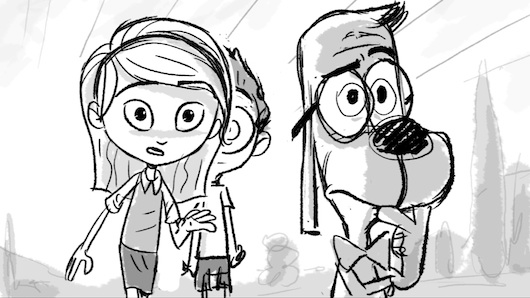 Re-Drawing History With the Storyboard Artists of Mr. Peabody & Sherman

They rose to prominence more than half a century ago, a genius talking beagle who invented a time machine (plus won a Nobel prize and two Olympic medals) and the dorky little boy he adopted. As the whimsical world travelers who showed up in the middle of the Rocky and Bullwinkle Show, Mr. Peabody and Sherman brought a generation of cartoon audiences to the farthest reaches of history thanks to their WABAC machine. Today, the characters are doing they’re own bit of meta time traveling, jetting 50 years into the future as the stars DreamWorks Animation’s very current 3D hit.

Head of story Walt Dohrn and the rest of the Mr. Peabody & Sherman creative team walked a tightrope from the very beginning: How to capture the essence of the 1960s original while making a decidedly 21st-century movie? “If we had a group meeting we’d start by watching an old one just to get that feeling and flavor,” Dohrn explains. “We never forgot those roots. We wanted to make sure we retained the essence of what made it special, but at the same time we evolved it to the new 2000s version where everything is much more cinematic and there are more emotional layers to the story.” 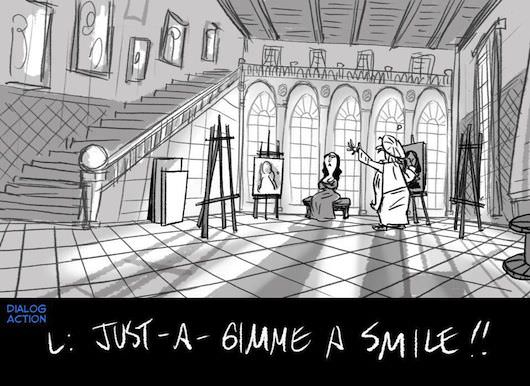 With the lofty title “head of story,” it was Dohrn’s job to act as a conduit for director Rob Minkoff, the producers and the rest of the editorial side, communicating their visions to a team of eight storyboard artists who took a first pass at every scene in the film. (Fresh out of a meeting, Dohrn, a veteran of SpongeBob Squarepants and three Shrek movies, would often rough out his own boards just to ensure a good idea wasn’t forgotten.)

When time travel is possible, nothing is off limits—for better or worse. Through a meticulous process of trial and error, the artists were able to figure out just where in space and time this big-screen adventure would take our heroes. “It was really hard to nail down which time periods to do,” remembers Dohrn. “We tried a bunch out in board form where we can quickly get a feel for a scene. Is this a rich enough experience? Is it funny enough? We look to storyboard artists to help find that.”

Freed from the confines of a set script, Dohrn and his team could play around, bouncing gags off each other to gauge how a big-screen audience would respond many months later. Take the time Mr. Peabody and Sherman find themselves in Egypt. “The script might just say, ‘Sherman and Peabody need to escape the tombs,’” Dohrn explains. “So we start crafting that and throwing in lines of dialogue here and there. That might go back to the writer, who finesses the lines, and then we even go down and do the scratch audio recordings before the actors.”

“Earlier in the process you might get a sequence that’s a little more in an outline format,” adds Tim Heitz, a storyboard artist who has been with DreamWorks Animation for nearly a decade. “They’ll say, ‘Here’s the main beats we want to hit, but feel free to come up with ideas and jokes and put them in along the way.’”

That gave the team freedom to stumble onto jokes organically, such as King Tut being a spoiled, bratty teen or Leonardo da Vinci and Mona Lisa bickering like an old married couple. 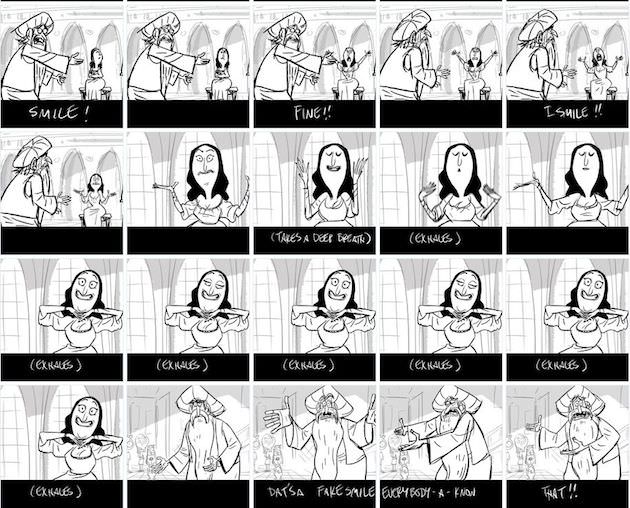 It also allowed certain off-the-cuff gags—like Heitz’s idea to end the da Vinci scene by having the oil canvas of a buxom woman break over Peabody’s head—go from not even being in the script to one of the biggest laughs in the film’s trailer. 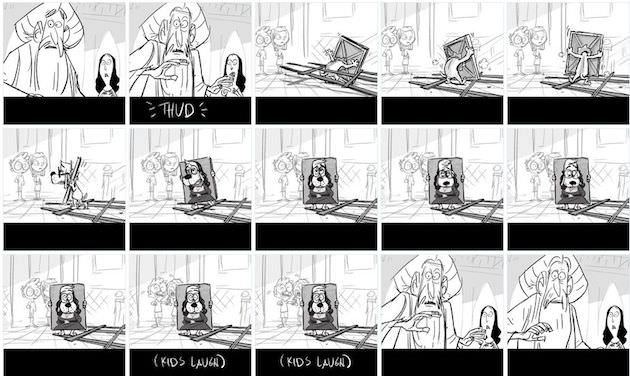 Naturally, not every attempt worked, but they almost always bore some fruit. For instance, the team could never figure out a seamless way to get our heroes to ancient Rome, but those attempts eventually led them to the introduction of Agamemnon and the Trojan War—one of the strongest moments in the movie.

By injecting their fun-loving personalities into each storyboard and even roughing lines of audio in the recording booth, the artists not only planted the seeds for the film’s animation but helped craft the actual performances of a voice cast that includes Ty Burrell, Leslie Mann and Stephen Colbert. Sometimes that led to serendipitous results, like how head of story Dohrn, who did the scratch tracks for Mr. Peabody well before Burrell stepped in, wound up supplying the final voice for Spartacus based on the strength of his performance. (That’s become a bit of a tradition, as Dohrn voiced Rumpelstiltskin in Shrek Forever After thanks to the same process.)

Tens of thousands of storyboards later, the finished product of Mr. Peabody & Sherman is in theaters, the successor to The Lego Movie as the biggest animated film of 2014. The artists’ hands may be tired from all that time hunched over with pencil and paper—or, more accurately, styluses and Cintiq—but their work at DreamWorks Animation is never done. And Trolls, based on the adventures of those funky-haired dolls and set for release in November 2016, isn’t going to animate itself. 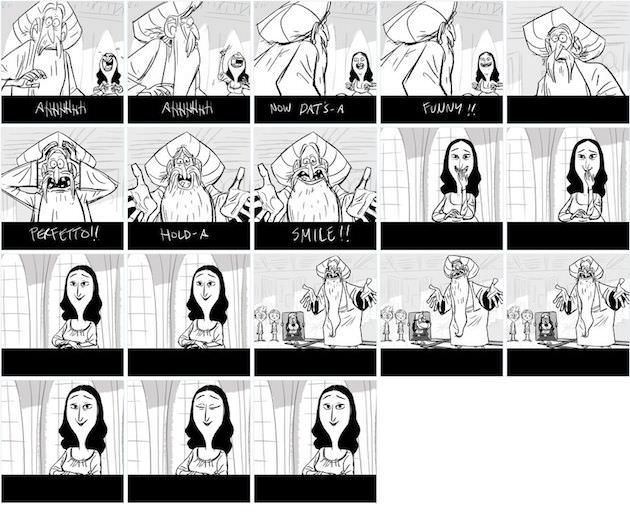