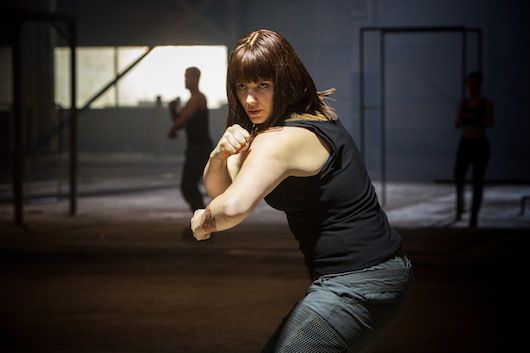 How to Shoot Stunts & Action on a Budget

The stunts in the recent Liam Neeson action flick Non-Stop were breathtaking, thanks to the work of stunt coordinator (and Neeson body double) Mark Vanselow. In the upcoming Divergent, fight coordinator J.J. Perry helped turned Shailene Woodley into a credible action heroine. There will be more wild sequences on display in Noah, Darren Aronofsky's very singular take on the Biblical story in which he had his stars, including Russell Crowe, Ray Winstone and Emma Watson, brutalized by blasts of water, howling wind and, in one thrilling (and dangerous) stunt, the blast of fire bombs going off. "Can we practice this?" Emma Watson asked Aronofsky (reported by Tad Friend in a great profile of the director in The New Yorker), before a scene in which her character, Ila, was to be a mere ten feet away from several large blasts. "There is no practice," Aronofsky told her, and then he had his special-effects foreperson, David Poole, assure her she would be safe. There were some 82 professional stunt people working on Noah, and you can be sure there was an equally large financial and human commitment to capturing the stunts and action in Captain America: The Winter Soldier, The Amazing Spider-Man 2 and many more massive films that will be coming to theaters in the next few months.

What does one do, however, when they want to create thrilling action scenes with serious stunts but is several tens of millions of dollars short on funds? While at SXSW, we sat in on a class whose goal was just that—to help filmmakers on any budget create legitimately exciting (and safe) action sequences and stunts. The panel was hosted by TXSTAR Entertainment, an Austin-based full service feature film production company created by veteran stunt coordinator, director and filmmaker Bobby Sargent.

Sargent has 40 plus years of experience in film industry—he was Burt Reynolds stunt double for Smokey and the Bandit, worked as a stuntman in Sylvester Stallone's First Blood, Wes Craven's A Nightmare on Elm Street, and, being an Austin guy, with Richard Linklater on Dazed and Confused to name a few. Sargent is a producer, second unit director and stunt coordinator on director Val Gameiro upcoming Amnesia, a film about human trafficking shot on a very modest budget (roughly $10,000), yet it involves a huge amount of stunts and action sequences. That money paid for craft services, safety pads for stunt work, fire extinguishers—“You cannot believe what you can do with what you have,” Gameiro said. He and Sargent offered a list of how to pull off the action and stunts you need on a budget that would amount to a few days of craft services on a studio film.

This might seem absurdly obvious, but Sargent and Gameiro said that often filmmakers don't think deeply enough about their crew, and this includes making sure you have a stunt coordinator who is not only committed to telling your story on a modest budget, but to keeping everybody safe in the process. When it comes to setting up stunts and action sequences, very often the stunt coordinator becomes a second director—he or she knows better than anyone else on set what is doable, and will often have suggestions for how to improve a scene.

There are several keys to safety, and one of them is that you absolutely must have insurance. When it comes to your stunt men and women, avoid anybody willing to do anything, regardless of how dangerous it is. Sargent recalled countless interactions he's had on set where inexperienced stunt people claimed they were fearless and capable of incredible acts. Every specific stunt requires what's called a 'stunt adjustment,' which is a cost that is added to the stunt person's daily rate. The way to keep these costs down is to thoroughly think through each and every stunt, ask yourself whether it's necessary, and remember this key rule—if you don’t think you can do the stunt more than once, don’t do it at all. “Little things have killed people in this business more so than the big stunts,” Sargent says.

"Preparation is everything," Sargent says. "The more prepared you are the cheaper it will be on set," Gameiro added. "You average twenty minutes per set up for dialogue—action takes much more time. Preparation needs to start at the writing phase," Sargent says. “You write for what you have access to.” If you begin to think about your stunt set ups in the writing process, keeping in mind what locations you'll reasonably have access to, you can create brilliant sequences for little money by writing to what you have, not what you wish you could get. Whether you're filming your movie in your old high school, your sister's house or a local department store, take note of your locations and write your action pieces around those. Sargent and Gameiro also advise bringing your stunt coordinator into the process as early as possible. The more information they have early on, the better they can help you create meaningful, thrilling moments within your budget.

"First time directors don’t understand that when you shoot down on a stunt, you’ve killed it," Sargent says. "Shoot down on a stunt and you’ve flattened it. If you shoot across from it, in profile, it’ll look much more exciting." Sargent and Gamerio say simply going over your shot list and putting yourself in the audience's position—what would thrill me most?—is the key to blocking your action shots for maximum effect. It can be deceptively simple figuring out how to frame your sequence. "What’s scarier, a bear running towards you or away from you?" Sargent asks. Another seemingly obvious, but often overlooked, piece of advice—get all your crucial shots done first, and if you’ve finished your shot list, then you can shoot your ‘accent’ shots, those beautiful little flourishes that every filmmaker desires.

"You want to learn how to shoot a film?" Sargent asks, "Learn how to shoot a fight." One of the big rookie mistakes when filming a fight scene is having your combatants throwing hooks and haymakers. "You don’t hook—that’s going to be an obvious miss," Sargent says. "If you do a straight jab, that’s a perfect hit." Bringing a young actress on stage with him, Sargent gave us a vivid example. Throwing a hook at her, it was clear his fist nowhere near her face. His jab, however, that flew past her face, looked like it made direct contact. From our vantage it was impossible to see that his fist was actually practically a foot off to the side of her face. "If you’re shooting cars, boats, or people tussling, it’s the same thing—it’s called 'crossing the line,'" Sargent says. "If it’s shot properly you reduce the risk. You want to cross their face with your fist. You’re taking a three-dimensional plane and crunching into two dimensions with a film, that’s why you cross the line. The line is the center of the lens to wherever the action is going to take place, that’s the line you must cross."

"Lens choice is absolutely crucial in making things look good," Sargent says, and, it turns out, an easy way for a low budget film to make a stunt look much more real, and dangerous, than it actually is. For example, if you want to have someone inching out onto a ledge, a 15 millimeter lens will make someone only one story up look like they're six stories up.

Sargent says that the best book for filmmakers who want to learn how to shoot action and stunts is “Shot by Shot” by Steven Katz. "Move the camera, create movement, create motion, create action."